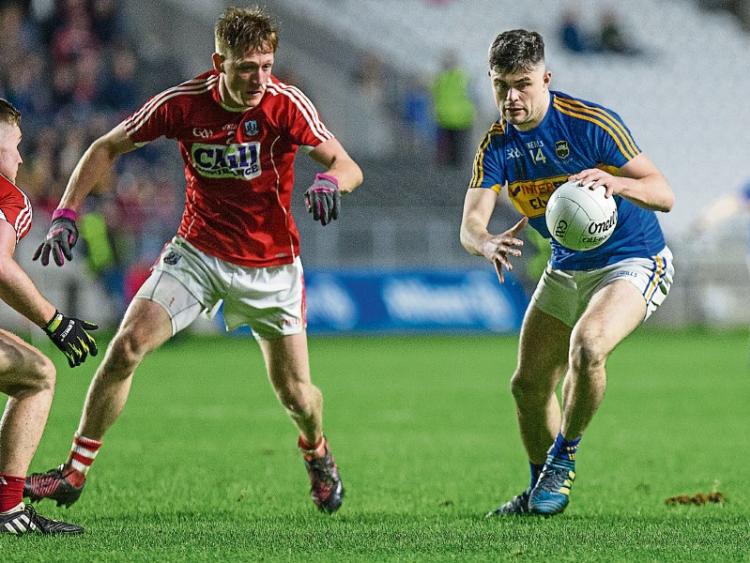 Tipp and Cork meet for the fourth time in five years at Munster semi-final stage with only a kick of a ball between them on the three previous occasions.

So here we go again - Tipp versus Cork in a Munster Senior Football Championship Semi-Final for the fourth time in five years (Semple Stadium, Thurles, this Saturday at 7 o'clock).

In what was a fixture that for decades was regarded as a “run out” for Cork sides in their preparation for the Munster final against  Kerry, is now no longer such a foregone conclusion. And all that is due to the great advancement in Tipperary football over the past number of years, work on and off the field by forward thinking football men.

Now in his third year at the helm of the Tipperary operation, Liam Kearn will lead side into this game with a fair and 50-50 chance of success.

The respect that Tipperary football sides have always had for ‘The Rebels’ still exists, but the fear factor of the red jersey is now no longer be an issue for Premier County football sides.

Saturday evening's game promises to be a cracking match-up and this Tipp team and manager their Liam Kearns are deserving of great admiration and respect for what they have brought to the county in terms of success in their three years together.

With that in mind both Liam Kearns and Tipperary Football Board chairman, Barry O’Brien, have made an appeal to all Gaelic Games followers in the county to get to Thurles on Saturday evening to lend support.

Knowing the recent history between the sides and how close the calls have been - literally a kick of a ball in all the last three championship games - Kearns made this appeal on Monday.

“The odds are stacked against us against Cork and we could do with all the support we can get. I ask as many Tipperary supporters as possible to turn up for the match and make as much noise as they can. The players have put in a huge effort and the support could be vital in determining the result of the match, they could be the difference and give us that little extra edge that we need.

“It’s a tough task to win two matches in seven days the home support could make all the difference,” asked the Tipp manager who knows that a victory would pitch Tipp  against Kerry (most likely) in a Munster final back in Semple Stadium. Clogheen man Barry O’Brien, chairman of the Tipperary Football Board, echoed the manager’s sentiments by saying...

“This game is one of the most important that Tipperary football has played in a long time with the winners being not only assured of a Munster final place but are also just one step away from the Super 8s.

“We appeal to as many Tipperary GAA supporters as possible to come to Semple Stadium on Saturday evening, bring all the colour you can and make as much noise as possible. The players have put in a monumental effort, not just in 2018 but over the last decade or so to improve our standing in Gaelic football and they truly deserve massive support,” said the Football Board chief.

The  legendary rivalry between Tipp and Cork which has existed in hurling since the foundation of the GAA in 1884 has in recent years also found its way to the football code between these Munster rivals.

They clashed in their first semi-final in years in June of 2014 when in what is now the old Páirc Uí Chaoimh the hosts survived by the skin of their teeth against Peter Creedon’s underdogs, eventually winning by 0-16 to 1-11. Tipp were ahead at the break by 1-6 to 0-7 that balmy evening, their goal coming from Conor Sweeney, whom Tipp will be hoping is fit to take his place this weekend having sat out the victory against Waterford with a tight hamstring.

It took three late second half points from Cork substitute and dual star Aidan Walsh to eventually wrestle victory from the Tipp braves.

Roll on 2016 and Liam Kearns’ first year at the controls and with it Tipperary’s first victory over Cork at senior football in 72 years. On a never-to-be-forgotten day  at Semple Stadium, Tipp emerged victorious by 3-15 to 2-16. But it was an unbelievable game in which Tipp fell over the line having being well ahead at the break by seven points. Conor Sweeney and Michael Quinlivan had Tipp’s early goals and when Brian Fox had his side’s third green flag with eight minutes remaining to put Tipperary a staggering nine points clear it seemed the game was all but over.

Amazingly Cork somehow came back to level as the game went into time added-on before Kevin O’Halloran kicked two placed balls to see Tipp into the history books with a first win over the Leesiders since 1944.

And then last year to Páirc Uí Rinn for yet another battle at the end of which Tipp lost out by a point 1-10 to 1-9 in a game many figured was there for the taking.

That day Conor Sweeney (with his third championship goal in three Munster semi-finals against Cork) netted to put Tipp ahead in the 69th minute by 1-9 to 0-10 and victory was almost assured. Almost! Heartbreakingly from our point of view Cork came straight down the field and Luke Connolly goaled to save Cork blushes.

Conor Sweeney in race against time to be ready

We got some slight measure of revenge in Division 2 of the league in  January this year when we recorded a win over the same opposition by 3-16 to 1-16. On that occasion Tipperary had had a good pre-season under their belt and had a march on Cork who were also without their Nemo Rangers players still involved in the Munster Club Championship. And we rode our luck also with Evan Comerford saving a penalty before half-time and Tipperary having a few close goalline clearances that one normally wouldn't get.

On Saturday next we'll need all the support we can get and whatever bit of lady luck might be going if we are to topple 'The Rebels' - the team on the hallowed turf of Semple Stadium will give their all in that cause, the least the Tipperary supporters can do is get behind them. Munster Senior Football Semi-Final this Saturday evening at 7 pm in Semple Stadium. Be there!