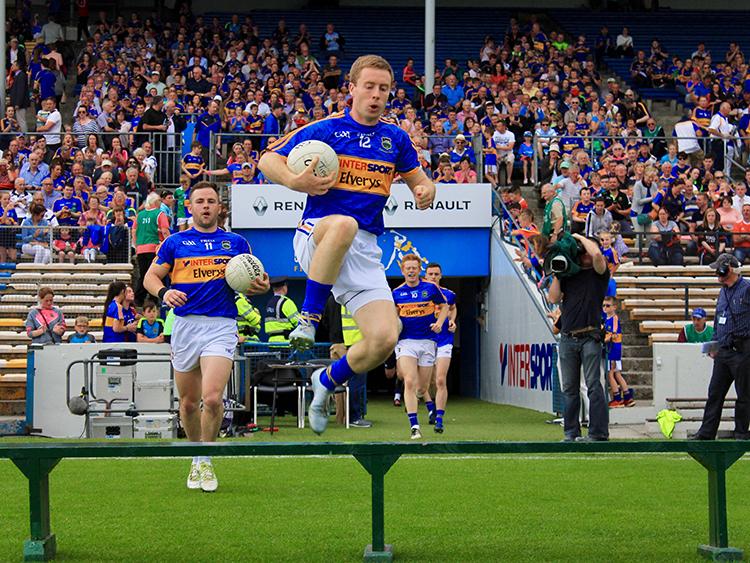 Brian Fox made a huge contribution to the Tipperary cause on Saturday evening. Photo: Enda O’Sullivan

Cork were fully deserving of their place in the provincial final on June 23rd given the quality of this performance, but the frustrating aspect to this contest was that Tipperary didn’t do themselves. And, the questions will come a lot easier than the answers for an absolutely heart-broken Premier County camp.

There is more in this Tipperary team. Liam Kearns’ men have proven themselves as a positive civic metaphor for the county of Tipperary and the hope must now be that the Premier County can re-group in time to have a positive impact on the up-coming qualifier series.

The sides were locked on 0-3 apiece in the first half before Cork exploded into devastating life and during a nine-minute period blasted 1-4 without reply to take a significant lead (1-8 to 0-4) into the break. Ultimately, Tipperary could not reel Cork in especially with Luke Connolly in such devastating form for the Rebels (0-10, 0-5 from frees).

And, the form of the Nemo Rangers man contrasted sharply with a Tipperary outfit who struggled to get marquee forwards like Michael Quinlivan and Conor Sweeney on the ball in dangerous positions.

Tipperary, we hope, will come back stronger for this experience. And, it was heart-warming, to hear a 3,339-strong crowd roar Tipperary on at regular intervals during this contest.

In terms of a spectacle the football was poor during the opening third of this contest - it appeared as if the anxiety associated with the occasion was getting the better of the respective groups of players. And, you can be sure that the significance of the result was not lost on either side. The battle, however, was wholehearted and therefore entertaining in its own way.

Following a couple of early flurries in front of either goal a Luke Connolly effort got Cork off the mark in the sixth minute before Seán White thundered up to join the attack from wing-back to double his side’s tally in the ninth.

In the 12th minute Cork ‘keeper Mark White saved from Michael Quinlivan who appeared to be fouled for a penalty in the process of taking his shot - Quinlivan’s appeal, however, was waved away by the match referee.

In the 14th minute Jack Kennedy stroked over a 45-metre free to tie the game before a superb point from Luke Connolly two minutes later edged Cork back into a one-point lead (0-3 to 0-2).

The contest then arrived at what appeared a significant juncture in the 19th minute when Alan Campbell sparked a Tipperary attack which featured a glorious dink pass from Michael Quinlivan - the unmarked Liam Casey gathered possession, but Cork ‘keeper Mark White saved smartly.

Rebel full-back Jamie O’Sullivan was looking distinctly uncomfortable on Michael Quinlivan and fouled the Clonmel Commercials star for a free in the 21st minute which Liam McGrath converted to tie the game (0-3 apiece).

Tipperary were struggling to piece together their attacking moves, but were consoled somewhat by the fact that they were still in the contest.

Luke Connolly, however, was flying it at the other end of the field and booted over his third point from play in the 24th minute to present the Rebels with a 0-4 to 0-3 lead.

Cork then created a terrific goal-scoring opportunity when Luke Connolly set up Aidan Walsh in the 28th minute, but Tipperary captain Robbie Kiely recovered just in time to dispossess the raiding Rebel with a sensational tackle.

The incident did not discourage Cork, however, with Ruairí Deane setting up Luke Connolly for a point which could just as easily been a goal seconds later. Then, in the 31st minute, Cork notched the goal that their enterprising attacking play probably deserved when Colm O’Neill booted in a vital three-pointer (0-3 to 1-5).

Mark Collins and Luke Connolly added further points from play soon after and Tipperary trailed by seven - the home side had now shipped 1-4 without reply (Cork had also managed all of their scores from play).

An absolute dinger of a left-footed point from Liam McGrath in the 34th minute gave the home support something to shout about, but a Luke Connolly free closed out the opening half and the Premier County trailed by seven at the break (0-4 to 1-8).

Three minutes into the second half Luke Connolly stroked over a free to cut Tipperary eight adrift and it appeared as if this contest was wriggling away completely from Liam Kearns’ men when Mark Collins added another point in the 41st minute (0-4 to 1-10).

Tipperary needed a good start to this period of the contest, but it was Ronan McCarthy’s men who seized the initiative and a Luke Connolly free in the 44th minute left an intimidating ten between the sides.

The home side’s first score of the second half materialized in the 50th minute when Liam McGrath converted a placed ball (0-5 to 1-10) - Tipperary had only scored two points from play by this juncture. Liam Boland, however, addressed this issue when he cracked over a superb point off his left foot following a patient Tipp attack in the 52nd minute.

Points from Liam McGrath (two, one free) and Philip Austin cut the Cork advantage to five (0-9 to 1-11) by the 59th minute, but Tipperary were left cursing their misfortune in the 58th when Stephen Cronin got back to block Michael Quinlivan when the Commercials man had goal on his mind.

A Luke Connolly free and then a punched point from Paul Kerrigan helped Cork back into a seven-point lead before another placed ball from Luke Connolly helped the visitors toward a 1-14 to 0-9 lead.

In the 67th minute a Luke Connolly goal chance found Evan Comerford’s side netting before Mark Collins booted over his third point from play in the last minute. Paul Kerrigan swung over a right-footed effort in second half injury time while Tipp chased goals at the opposite end of the field.

A Brian Hurley point brought the scoring to a conclusion in the 75th minute.

Then, to add insult to injury, Jack Kennedy shipped a black card to reduce Tipperary to fourteen men.