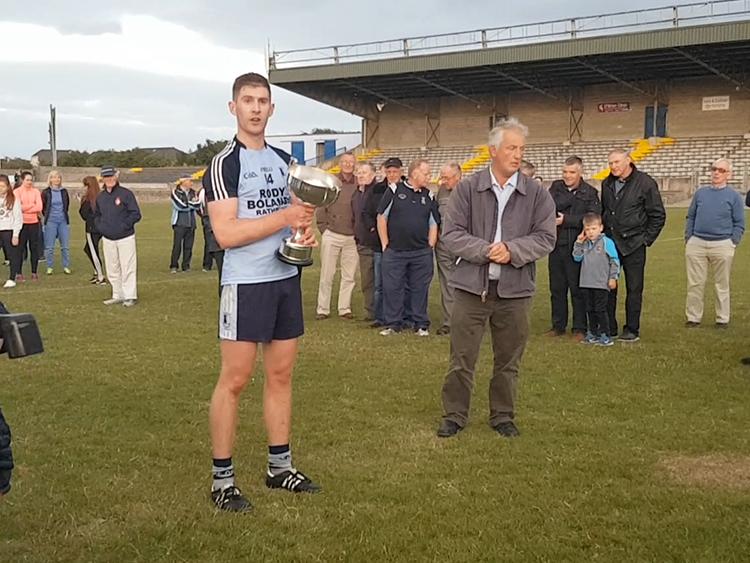 Many suspected that the energy exerted by Éire Óg against Kiladangan and the superb physical conditioning of Johnny Kelly's Borris-Ileigh side would, ultimately, catch up with the Blues. And, such an assumption looked all the more likely when Shane Kenny plundered the only goal of the game in the first half of extra-time, but Nenagh Éire Óg responded well to the challenge posed. Indeed, the side managed by John Fitzgerald (Na Piarsaigh, Limerick) proceeded to out-score their opponents 0-7 to 0-2 during the concluding stages of this contest and deservedly took the honours.

Paddy Murphy and Conor Kenny shone brightly for the respective sides and although both teams fielded without a whole raft of notable starters we were treated to a reasonably entertaining contest at MacDonagh Park, Nenagh.

Neither back room team, however, will be pleased to learn how profligate they were in front of goal - Éire Óg fired twelve wides, dropped four shots short and missed two frees while Borris-Ileigh belted eight wides, landed eight efforts in the hand of goalkeeper Shane Hennessy and also missed six frees. Add in a series of butchered goal-scoring opportunities for both sides and you get a clearer picture of a contest which, perhaps, failed to live up to its pre-game billing.

Playing with the aid of the breeze Nenagh Éire Óg started well and led 0-2 to no-score before Borris-Ileigh got off the mark in the ninth minute thanks to a Conor Kenny free. Michael Heffernan’s third converted free forced the Blues two in front and although Conor Kenny responded for his side two more Heffernan placed balls left three in it with seventeen minutes played (0-5 to 0-2).

The sides traded points before enjoying a goal-scoring opportunity a piece - Killian Gleeson and Shane Kenny were denied by smart saves from the respective goalkeepers in the 20th and 24th minutes.

Efforts from Mattie Stapleton, Shane Kenny and Michael Heffernan (two, one free) closed out the opening half with the home side leading 0-8 to 0-5.

Borris-Ileigh out-scored Éire Óg 0-4 to 0-2 during the opening eight minutes of the second half. Three Conor Kenny frees featured during this period and Jerry Kelly added another from play while efforts from Paddy Murphy and Adam Healy proved encouraging in nature for the Blues (0-10 to 0-9).

Efforts from Barry Heffernan (free) and Adam Healy opened a three-point gap, but Éire Óg were left sighing with relief in the 40th minute when Shane Hennessy denied the raiding David O’Connor. Borris-Ileigh, however, stuck at it and were rewarded with three successive points (Conor Kenny, Mattie Stapleton & David O’Connor) which tied the game (0-12 apiece) with forty-three minutes played.

A James Mackey effort forced Nenagh back into a narrow lead. David O’Connor hit back for Borris-Ileigh and when Paddy Murphy and Conor Kenny (free) traded efforts the sides were level, once more, entering the final ten minutes.

James Mackey landed a valuable point from play for Éire Óg in the 52nd minute before Borris-Ileigh spurned four consecutive efforts at goal. The equaliser did materialise, however, on the hour mark when Conor Kenny converted a placed ball.

Then, as late as the 62nd minute, Borris-Ileigh took the lead for the first time in this contest when Mattie Stapleton landed a mighty effort. To their credit, however, Nenagh Éire Óg engineered a late free which Barry Heffernan slotted over (0-16 apiece).

Éire Óg made an encouraging start to extra-time when points from Paddy Murphy and James Mackey (free) presented the home side with the initiative, but Borris-Ileigh re-claimed the lead thanks to a cracking Shane Kenny goal in the fifth minute. Conor Kenny added a point from play soon after and the Blues trailed by a significant two (1-17 to 0-18).

Nenagh Éire Óg did especially well thereafter with efforts from James Mackey (free), Conor Ryan and Paddy Murphy helping their side back into the lead - the Blues retired at the break nursing a 0-21 to 1-17 advantage.

Soon after the interval the misfortunate Adam Healy saw his stinging effort at goal deflected out for a ’65 which Barry Heffernan converted before a Philip Hickey point forced Éire Óg three clear.

A Conor Kenny free brought the scoring to a conclusion from a Borris-Ileigh point of view while Nenagh Éire Óg closed this final out with scores from man of the match Paddy Murphy and Andrew Coffey.