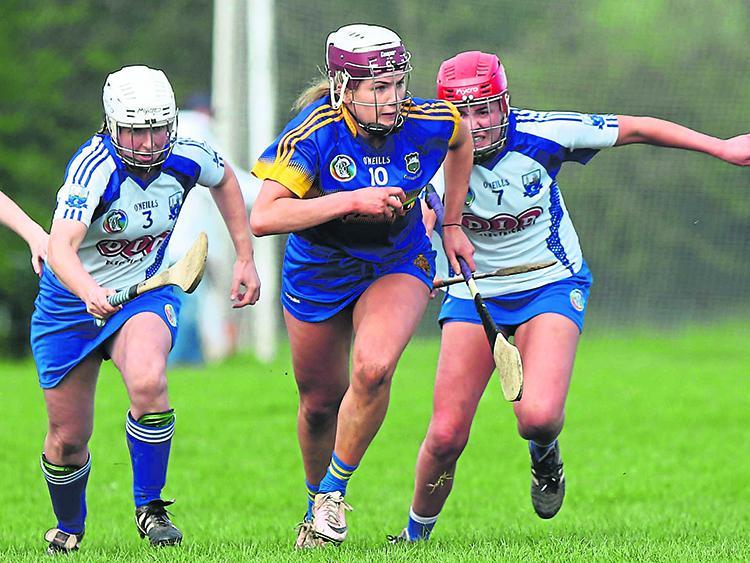 Bill Mullaney’s Tipperary team overcame a distinct wobble against Waterford to book their place in the semi-finals of the Liberty Insurance All-Ireland Senior Camogie Championship on Saturday evening. The Déise trailed 0-11 to 1-4 in the interval, but rallied well in the second half. Indeed, when referee Owen Elliott signaled his intention to play three minutes of injury time there was just three points between the sides. However, when Cáit Devane’s long-range free dropped into the net in the 62nd minute there was no way back for Waterford at Páirc Uí Chaoimh, Cork.

Orla O’Dwyer was named as the player of the match while Ciardha Maher and Mary Ryan were also outstanding on a Tipperary team who will simply have to improve to a significant degree in order to compete in the last four of the competition.

Manager Bill Mullaney is joined on the management team by selectors Niamh Lillis, Cian Treacy, Carmel Bradshaw and Aaron Whelahan while the maor foirne for the team is John Lillis.

Waterford employed two inside forwards and an extra midfielder from the start which Tipperary reacted to by positioning Mary Ryan as the free defender in a sweeping role.

The key to such a set-up would be Waterford’s ability to deliver possession to their inside line and by-pass the Moneygall star in the process. Tipperary coped admirably, however, with the problem presented by the Déise and led by three points after just ten minutes played. You presumed that the Waterford tactical set-up was designed to limit the effectiveness of the Tipperary half-forward line; a half-forward line which completed the opening half with five points from play.

Efforts from Grace O’Brien and Ciardha Maher got Tipperary off to an encouraging start and although Beth Carton responded with a converted free in the seventh minute the hard-working Premier half-forward line was working well to dilute the Waterford set-up with Laura Loughnane, Cáit Devane and Orla O’Dwyer adding successive scores. After thirteen minutes Tipperary led 0-5 to 0-1.

In the 13th minute Grace O’Brien notched a goal which was oddly ruled out when Waterford were presented with a free out. Cáit Devane set-up the opportunity for O’Brien and required treatment following the incident, but it appeared as if the free was bizarrely awarded against the Clonoulty-Rossmore star for charging. Unperturbed Cáit Devane added an effort from play in the 15th minute and the Premier County led 0-6 to 0-1 - by this juncture Tipperary led the shot count 9-1.

Cáit Devane (free) and Caoimhe Maher (thanks to a brilliant left-handed effort) helped Tipperary into a seven-point lead (0-8 to 0-1) while in the 22nd minute a Beth Carton free doubled the Déise tally as Waterford notched their first score in sixteen minutes.

Ciardha Maher and Niamh Rockett (Waterford’s first point from play) traded efforts thereafter while in the 25th minute an incredible free was awarded against the misfortunate Cáit Devane - following what appeared a strike from a Waterford defender the Tipperary player collapsed to the ground in a heap, but a free was then awarded against the full-forward for over-carrying. The decision of the referee was greeted with howls of derision from the crowd.

A Beth Carton free reduced the Tipperary lead to five points in the 28th minute and then in the 30th Waterford happened upon a piece of good fortune when Beth Carton’s ambitious over-the-shoulder effort dipped under the crossbar and presented the Déise with a goal.

Tipperary, however, responded to the challenge posed very positively - Grace O’Brien drilled over a point in the first minute of injury time and then set up Orla O’Dwyer in the third to help the Premier County toward a four-point interval advantage (0-11 to 1-4).

Waterford started the second half well with points from Lorraine Bray and Niamh Rockett reducing the Tipperary lead to two, but, thankfully, Orla O’Dwyer hit back with her third strike from play in the 35th minute to settle the Premier County (0-12 to 1-6).

Soon after Sarah Fryday’s hand-passed effort found the side netting before a fourth Beth Carton free in the 39th minute left two between them (0-12 to 1-7).

Entering the final quarter there was still just two points between them and Tipperary required a little encouragement as Waterford appeared to be growing in confidence with each passing minute. And, the fact that the Premier County had now amassed seven wides and dropped five shots short was a little worrying.

Ciardha Maher’s third point from play in the 49th left three in it (0-13 to 1-7) before this quarter-final appeared to have arrived at a critical juncture in the 54th minute when Casey Hennessy picked out Miriam Campion, but the Drom & Inch star’s hand-passed effort bounced wide.

When three minutes of injury time were signaled we shifted a little uneasily in our seats as Waterford pushed forward in search a goal. We were left sighing with relief in the 62nd minute when Cáit Devane’s long-range free from the half way line deceived Waterford ‘keeper Ciara Jackman and dropped into net. Cáit Devane converted another placed ball soon after and Tipperary departed Páirc Uí Chaoimh cherishing a seven-point margin of victory.