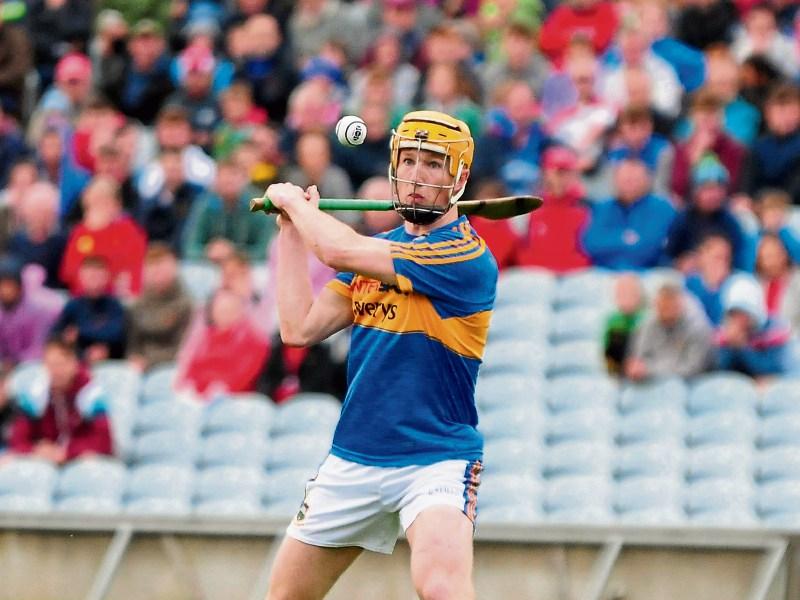 Jake Morris scored seven points for Eire Og Nenagh in their victory over Mullinahone at Templemore on Saturday evening.

What has been a very disappointing senior hurling year for Mullinahone was extended further this evening (Saturday) in Templemore with a 10 points defeat to Eire Og, Nenagh.

With both sides completing their three-game programme in what was effectively a dead rubber game, the result was a third successive win for the North Tipp side and a third defeat in a row for the Kickhams.

Even beforehand, the result of the game was of no consequence with Eire Og safely through to a quarter-final spot regardless, and Mullinahone doomed to a relegation battle even if they could win against Nenagh. And in fairness, although they tried gallantly, that scenario was never really likely with the Northerners having that bit extra in reserve all through, one felt.

That said, with 15 minutes to go the game was tied at 1-15 to 0-18 as Fintan O’Connor’s side desperately tried to upset all expectations. However, inside the last quarter Eire Og shifted up a gear and brushed aside a tiring South Tipp side by scoring 2-4 without reply over the final 15 minutes. Both goals came from corner-forward Adam Healy, both similar in style low to the corner of the net, first from the left and then right hand sides. The full-time scoreline may have flattered Nenagh a little but there was no doubt they were the better team, slicker, pacier and with far more options in the bag if needed.

Already without the services of Sean Curran (cruciate), the CJ Kickhams had also to field without Paul Kelly (back injury) and the unavailable Alan Walsh and Kevin Walzer, and they looked in big trouble early on when trailing 0-5 to 0-1 after 10 minutes of play. Nenagh had some fine early scores from play from Michael Heffernan (2), Adam Healy and Jake Morris, with Mullinahone’s sole reply a free from veteran Eoin Kelly.

The CJK settled themselves in the second quarter and with the aid of two long range points from Michael Dunne they had it back to 0-6 to 0-5 by the 20th minute, with Eoin Kelly (2) and Michael Heffernan converting frees for their respective sides.

Following a poor puck-out Tipp senior player Jake Morris scored his side’s first point from play in almost 10 minutes to double Nenagh’s lead, However, Mullinahone forced parity at 0-8 each by the 25th minute following two excellent Enda Keane points and another from Jack Shelly from half-way, in reply to yet another free from Eire Og captain Michael Heffernan.

But Nenagh would finish the first half the stronger continuing to force the Mullinahone defence into conceding frees which Michael Heffernan punished with two more white flags. They complemented two good points from play, one from Tommy Heffernan, and their last of the first half by Jake Morris after an intelligent crossfield pass from Conor McCarthy. AJ Cronin in reply got one back for Mullinahone who went in at half-time trailing by 0-12 to 0-9.

It was pretty much tit-for-tat for the opening minutes after the resumption. Four points apiece inside the first seven minutes saw Nenagh still lead by 0-16 to 0-13. Eire Og points in this period came from Jake Morris, James Mackey (after a nice passing move), Hugh Malony and Killian Gleeson. In reply the hard-working Colin Shelly (2) and Michael Dunne added points from play for Kickhams with Eoin Kelly scoring a free from 65 metres.

The game came alive in the 38th minute when a delivery from Eoin Kelly into Enda Keane was controlled at the second attempt and Keane gave Shane Hennessy no chance with a well-taken goal which tied matters for the second time.

And in an exciting period of the game, when it seemed we might yet have something to shout about, the sides were level twice more with nice scores from James Mackey (N) and a superb huge point from Luke Mullally (M), adding to frees from Graham Horan (M) and Michael Heffernan (N).

With 15 minutes to go the match was all-square for the fourth time. But crucially Mullinahone had never once hit the front, and they had their chances in this spell but three poor wides hit in quick succession denied them the chance of a lead.

And they paid dearly for this profligacy 10 minutes from time when a flowing movement from defence by Nenagh was delivered into corner-forward Adam Healy and with a ground stroke he beat stand-in keeper Kevin Bolger with a low effort to the far corner.

It knocked the wind out of Mullinahone and over the next 10 minutes the fresher looking Nenagh added four more points (from Jake Morris and Adam Healy as well as two frees from Morris) before the coup de grace was delivered. A long delivery by Daire Quinn was picked up by Adam Healy and this time coming in from the other side he hit a low drive past Bolger to complete the scoring at 2-22 to 1-15.

Nenagh, already through to the last eight, won’t have taken a whole lot out of this game except some match practice and a chance to try out a few of the panel members. Mullinahone, already doomed to a fight to retain their Roinn 1 status, will now be a worried side with the likes of Carrick Swans, Portroe and Killenaule also in the hat in that dogfight. Anxious times ahead for the “Green above the Red - and indeed both of the other South Tipp sides.