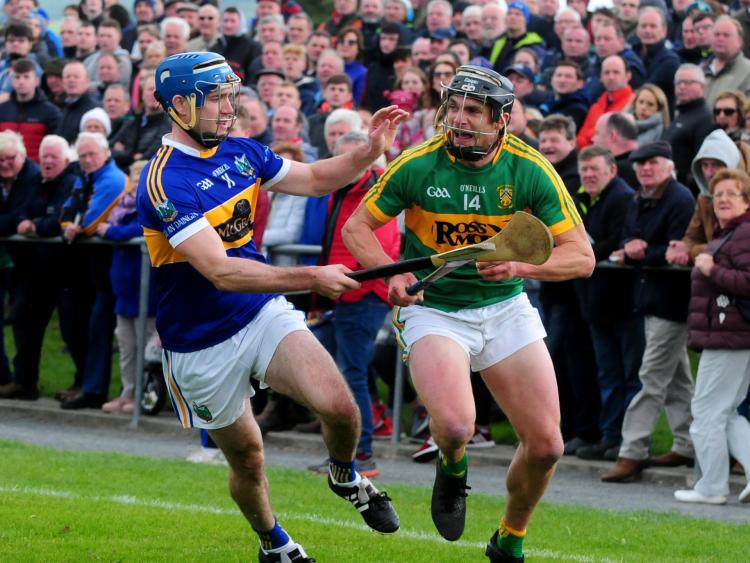 Clonoulty-Rossmore kept the West Tipperary flag flying high in the county senior hurling championship with this well-merited four-point win over a highly-rated Kiladangan in a quarter-final played at Dolla on Sunday last.

Clonoulty made the running all the way in a contest which suffered from the many interruptions due to injury. This resulted in the first half lasting thirty-nine minutes with the second half almost as long - the frequent stoppages, though obviously unavoidable, robbed the game of any real fluency.

Kiladangan were without the suspended county man Willie Connors and his absence was a serious setback for them as they set about making amends for their poor North final showing. To add to their woes they were hit by a Clonoulty side who were firing on all cylinders during the opening eighteen minutes as they raced into a 0-8 to 0-2 lead.

In that time Clonoulty looked like title-winning material as they used the ball smartly, exerted complete control and exposed their rivals in defence with Fiachra O'Keeffe and Dillon Quirke leading the charge with a brace of points each.

Gradually Kiladangan found their feet with Tadhg Gallagher, Paul Flynn and David Sweeney doing most to revive them. Their closing eight minutes to the half were most productive as they brought themselves level with an Andy Loughnane point in the 39th minute (0-9 each) - a scoreline that few would have predicted ten minutes earlier.

Kiladangan were growing in confidence despite the loss of full-back Darren Moran to a serious head injury just before the break which led to a long delay before he was stretchered off and play could resume. Happily reports on his well-being were positive when the sides came out for the second half.

Clonoulty stamped their authority on the third quarter, helped largely by a Cathal Bourke penalty goal in the 40th minute after Conor Hammersley, whose influence was increasing by the minute, was pulled down.

Clonoulty were 1-14 to 0-10 ahead heading into the last quarter with Paul Flynn raising Kiladangan’s only flag with a powerful drive that might easily have gone to the net.

Three points in four minutes from Ciaran Kelly, Tadhg Gallagher and Johnny Horan revived Kiladangan, but Clonoulty were containing their rally reasonably comfortably as they game went into injury time.

Six points to the good in the 65th minute Clonoulty loooked like assured winners, but in the 66th minute Ciaran Kelly netted for Kiladangan as the Clonoulty defence backed off his surging run through the middle.

Time was now the big factor as Kiladangan poured forward again and won a twenty-meter free. Up stepped Darragh Egan, but his blast for a levelling goal was stopped by John O'Keeffe on the Clonoulty line and when the West champs broke upfield Fiachra O'Keeffe crowned a very impressive personal display with his fourth point of the game.

This was a big win for Clonoulty against fancied opposition and they will quietly fancy their chances of a place in the final if they can reproduce their better periods in a more consistent manner.

Defensively, led by John O Keeffe, they are a match for most with Sean O'Connor and Ciaran Quirke also to the fore. Conor Hammersley had a great second half while in attack Fiachra O'Keeffe starred with Dillon Quirke, early on, and the experienced Timmy Hammersley also making significant contributions.

Kiladangan will be disappointed with the level of their own performance which only came up to scratch for limited periods. After a poor start they had to work hard to get back on terms and perhaps that effort and their injuries stifled their game plan. To their credit they fought to the finish and had Ciaran Kelly’s goal and their late rally come a bit earlier it might have brought about a different result.

Overall, however, they can have no complaint. David Sweeney was their stand-out man in defence getting through a huge amount of work. Alan Flynn, Paul Flynn, Andy Loughnane, Ciaran Kelly and Tadhg Gallagher also gave it their all.