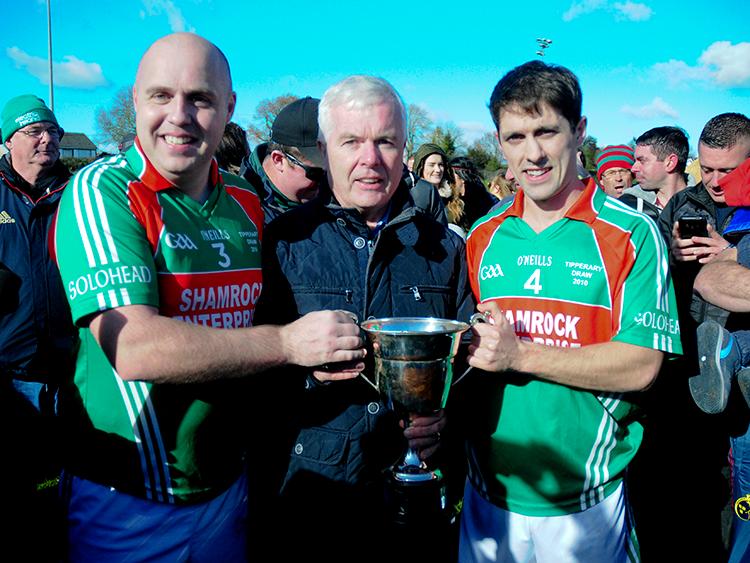 There was a delirious out-pouring of joy at Clonoulty on Saturday afternoon when a ravenous Solohead side retrieved a six-point deficit before seeing off Moyne-Templetuohy in the Tipperary Water County Junior B Football Championship final - captain Noel Kennedy had the honour of collecting the Dr Marsh Cup from Football Board chairman Barry O’Brien and in doing so the West outfit won the club’s first adult county football title.

Ironically enough the most entertaining period of this contest did not feature any scores. Moyne-Templetuohy played with the aid of a stiff breeze in the opening half and led 0-7 to 0-1 after twenty-four minutes. Solohead, however, fought back and found themselves back on terms (0-7 apiece) after the opening minute of the second half. From there a ferocious battle ensued and although thirteen minutes elapsed before Solohead took the lead for the first time the drama was extraordinary. There is no reverse gear in these Moyne-Templetuohy lads. The relentless Jack Taylor drove at the Solohead defence and was ably assisted by Denis Kelly, Gearóid O’Connor and Martin Kelly, but the men from the West found match winners in Noel Kennedy, James Dee, Michael Fitzgerald, John Joe O’Brien and five-point hero Eoin Riordan.

Solohead did especially well to hold off their opponents during the closing minutes of this contest and just about carved out the opportunities required to clinch a famous title.

Solohead captain Noel Kennedy had the honour of collecting the Dr Marsh Cup from Tipperary Football Board chairman Barry O’Brien and in doing so the West outfit won the club’s first adult county football title.

The West champions created a terrific goal-scoring opportunity in the eighth minute, but Michael Fitzgerald’s shot found a post.

Moyne-Templetuohy surged three clear during an impressive three-minute period (9th-11th) - Martin Kelly landed a superb effort from long-range before following that strike up with a converted free and then another from play following an eye-catching carry from Eoin Ryan.

Eoin Riordan got Solohead off the mark with a super point in the 13th minute, but Moyne-Templetuohy were moving well and added efforts - which arrived courtesy of Martin Kelly (two, one free), Gearóid O’Connor and Aidan Kelly - to force the Mid champions six clear (0-7 to 0-1) with twenty-four minutes played.

Solohead rallied with four critical points prior to the break. Eoin Riordan (two), Joss O’Brien (free) and Michael Fitzgerald were responsible for these scores while Moyne-Templetuohy ‘keeper Pat Meade did well to save a Joss O’Brien effort in the 27th minute.

Moyne-Templetuohy led 0-7 to 0-5 at the interval, but, despite playing into the breeze, Solohead dominated the shot count 16-10.

Solohead located a devastating vein of form during the opening minute of the second half when points from Joss O’Brien and John Joe O’Brien tied the game (0-7 each).

An enthusiastic band of Solohead supporters threatened to raise the roof, but to their credit Moyne-Templetuohy battled their way back into this final with Denis Kelly orchestrating matters and Jack Taylor carrying the ball impressively from wing-back.

Eoin Riordan edged Solohead into a narrow lead in the 44th minute before a Michael Fitzgerald effort opened a significant two-point gap with fourteen minutes to play (0-9 to 0-7).

Moyne-Templetuohy had not scored since the 24th minute and Jack Taylor checked that trend with a well-worked point in the 49th. Two minutes later Moyne-Templetuohy were left cursing their misfortune when Ben Ryan’s goal chance was blocked, but the Mid men found an equaliser in the 52nd minute when Martin Kelly booted over a placed ball (0-9 each).

This contest featured forty-six frees in all and in the 55th and 61st minutes Solohead’s Eoin Riordan and Joss O’Brien converted match-winning frees before referee Martin Doyle blew the final whistle. Cue delirium.