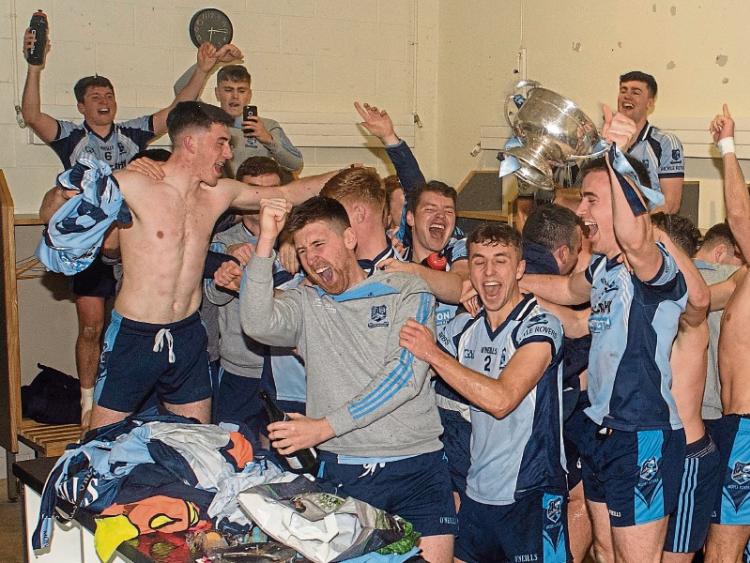 Moyle Rovers are back at the summit of Tipperary football for the first time since 2009 following Sunday's eight points victory over Ardfinnan at Semple Stadium, Thurles, before an attendance of 2,863.

It was a fully deserved victory in the end for the Powerstown/Lisronagh side on the back of a dominant second half performance, but make no mistake about it they were in serious trouble for long periods of the opening half.

Bravely Ardfinnan took the game to the hot-favourites from the outset and had built up a commanding 0-6 to 0-2 lead by the 26th minute with Sean Nagle prominent around the midfield. But a crucial few minutes before half-time were to have a huge bearing on the game and instead of going in four points up, ‘The Village’ had only one point to spare at the break, 0-6 to 0-5.

Somewhat against the run of play, three points in three minutes just before the half-time - two Liam Boland frees and a Shane Foley point - suddenly made it a one-point game.

In the time added-on at the end of the first half came perhaps the game’s most crucial moment. A Gavin Whelan pass into Daniel O’Regan caught the Moyle Rovers defence wrong-footed but instead of shooting at goal O’Regan took the option to go on further. It seemed he was then, arguably, illegally challenged and dispossessed but referee Sean Everard saw it otherwise and denied the penalty claim. It was a huge let-off for Moyle Rovers and had the decision gone the other way things might have turned out differently.

Whatever might have been said in the Moyle Rovers dressingrooms at the break worked wonders. The second half was to bear no resemblance to the first as Niall Fitzgerald’s team totally dominated and outscored their opponents by 1-10 to 1-1.

Such was the Monroe side's stranglehold on proceedings that they would rattle off nine unanswered points before ‘The Village’ would eventually get their first and only point of the second half in the 56th minute - 34 minutes of play since their previous point. That rate of  return was never going to win this encounter. Anchored by team leader Peter Acheson at midfield, Moyle Rovers found their feet and their belief early in the second half with two points in a minute from Liam Boland and Shane Foley, the first of those points the result of a move involving Stephen Quirke and Dara Ryan, but it was Paddy Morrissey’s thundering interception on the sideline that had turned over the possession. Now in front again for the first time since the 13th minute, Rovers would never look back.

A point from the outstanding Ross Mulcahy from 40 metres stretched the lead to 0-8 to 0-6 soon afterwards - Mulcahy’s contribution to his side’s victory was immense over the full hour.

A further three points in three minutes between the 40th and 43rd minutes from Stephen Quirke, Richard Power and Liam Boland, after Acheson had fielded superbly in midfield, stretched the Rovers lead to five by the end of the third quarter. Ardfinnan, it seemed, were  unable to do anything to stem the tide.

Rovers then began to introduce fresh legs and use the width of Semple Stadium to good effect as the game entered the final quarter. Wing-back David McGrath kicked a point from 30 metres into the Killinan end followed by another by the pacey Diarmuid Foley, who had just come on. And then Danny Owens made it nine in-a-row in the 54th minute when finishing off a move involving Diarmuid Foley and Morgan Irwin. It was all one-way traffic now.

Colm O’Shaughnessy interrupted the pattern with Ardfinnan’s first score of the second half in the 56th minute but it was just a token measure at this late stage.

Clearly enjoying his introduction Diarmuid Foley tormented the maroon rearguard with his second point in the 57th minute before the game was to finish with two goals.

Colin O’Gorman, one of Ardfinnan’s best all day, played in a fine pass to Paul Kennedy and the second half substitute rifled a goal with his left past the diving Ciarán Kenrick in the 58th minute. It rose a cheer for ‘The Village’ but it was just a consolation.

Not to be outdone the Rovers responded a minute later with one of their own. A move through Shane Foley and Liam Boland saw Boland’s effort bounce back of the post and Foley had the composure to gather the loose ball and bury it for the game’s final score and a 1-15 to 1-7 victory.

But it had all looked so unlikely in the first half with Rovers on the rack coming up to half-time.

Billy Hewitt had opened the scoring in the second minute with a free won by Sean Nagle. It took Rovers until the ninth minute to equalise, Sean Carey pointing the free.

In a very slow half, Rovers hit the front in the 13th minute when Stephen Quirke placed a pass into Liam Boland and he pointed well for the lead. But Moyle Rovers should have been well ahead at that point having kicked three wides and dropped another two poorly into the keeper’s arms.

Ardfinnan then hit their purple patch between the 18th and 26th minutes scoring five unanswered points. Suddenly the fancied Rovers looked very vulnerable and a shock looked on the cards.

After a slow and patient build-up Colin O’Gorman kicked a super point from 40 metres in the 18th minute to tie the scores at 0-2 apiece.

Sean Nagle who seemed to be everywhere in the opening half then got in around the Rovers defence to fist his side into the lead, quickly followed by another white flag from Daniel O’Regan after Darragh O’Leary threaded through a delicate pass.

Shortly afterwards Michael Barlow converted a close-in free won by Billy Hewitt before Barlow again did well in a tight space to kick another point for a surprising 0-6 to 0-2 lead for Ardfinnan.

And then those vital few minutes before the break when the pendulum swung Rovers way with three points in as many minutes, and the penalty call that Ardfinnan didn’t get. It knocked a lot out of their challenge and Rovers seized the initiative and their moment.

Overall this was by no means a classic final but that won’t bother the Monroe side having lost three finals in recent years. To finally get over the line is just reward for persistence and determination that can only help a club that has been self-doubting at times on the bigger days.

Ardfinnan will be disappointed with their collapse having worked themselves into a serious position of recapturing a title they last won in 2005. But credit to them, they raised a magnificent challenge in the first half that had their opponents on the ropes. But in fighting parlance also, they may have boxed themselves out of it too by the break; the wide open spaces and legs of Rovers capitalised on that after the interval. Rovers were undoubtedly champions-elect midway through the second period.

The day was Rovers day for sure and it was a team performance that eventually re-captured the O’Dwyer Cup. Ross Mulcahy stood out time and time again in the pivotal half-back slot, alongside David McGrath, and in front of rock-solid captain Alan Campbell and Paddy Morrissey in the corner. Peter Acheson won the ‘man of the match’ award for his overall contribution, but his midfield partner Richie Power also did great work.

In the forwards Shane Foley and Liam Boland accounted for 1-7 between them on a day when five of the six starting forwards scored. The one who didn’t, Dara Ryan, however, spent most of his day working tirelessly throughout the field and covered every blade of grass in Semple Stadium in a storming performance. Diarmuid Foley when he came on showed his undoubted class also.

Ardfinnan’s great run under John Evans eventually came to a halt in this final but they lost nothing in defeat. Heroically they took the game to their opponents and won many admirers for that. They had some solid performances, especially in the opening 30 minutes. Sean Nagle and Gerry Cronin in the centre of the field, Colin O’Gorman in a sweeping role, and Eoin Walsh and Michael O’Sullivan in the corners, all contributed much. At centre-back Colm O’Shaughessy never gave up as is his trademark form while in attack Paul Kennedy took his goal well.