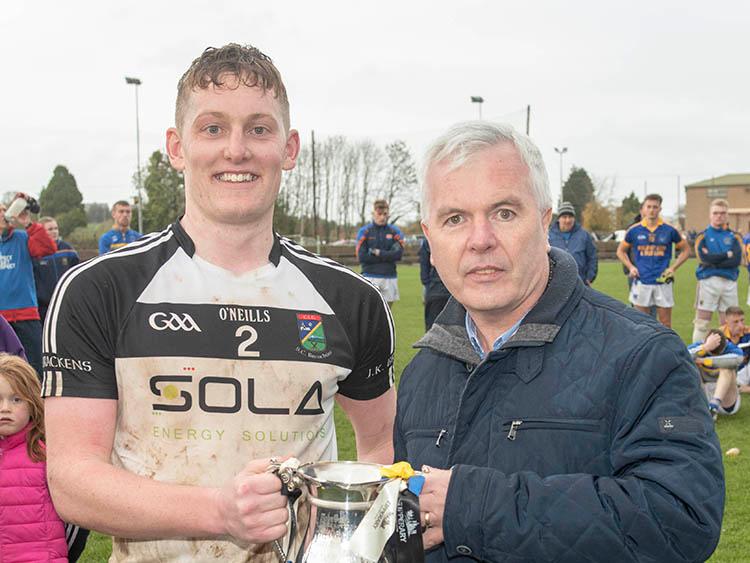 A series of missed chances proved very costly for Ballylooby-Castlegrace in Saturday's Tipperary Water County Junior A Football Championship final at Leahy Park in Cashel when they suffered a single-point defeat to JK Bracken’s.

The South team had enough chances and possession to have secured a reasonably comfortable victory, but, instead, their inability to convert all of that possession into scores let JK Bracken’s off the hook as the Mid Tipperary side held on for a narrow victory. JK Bracken’s rode their luck at times, but they made the most of their limited opportunities and, to their credit, refused to crumble in the face of intense Ballylooby pressure late in the game.

Ballylooby-Castlegrace will reflect on their twelve wides (compared to four for JK Bracken’s) and wonder how they let this game slip from their grasp. During the closing stages they pushed forward relentlessly, but couldn't find the scores that would either have sent the game to extra-time or sealed the win.

Ballylooby-Castlegrace set themselves up for a grandstand finish when Pierce Murphy, Danny Morgan and Conor Lonergan were involved in the move which ended with substitute Brian Fitzgerald scoring to leave them just a point in arrears with seven minutes of normal time remaining. And, it was all Ballylooby at stage - they were virtually camped in the JK Bracken’s half of the field during the closing stages which included four minutes of additional time. However hard they tried, though, they failed to score again despite forcing three late frees.

Credit is, of course, also due to JK Bracken’s who worked so hard to preserve their slender advantage with Jack Prout, Michael O'Meara, Michael Lynagh and captain James Bergin all immense in defense.

A Dean McEnroe free (awarded for a foul on Michael O'Meara) a quarter of an hour from the finish was JK Brackens’ final score and from there to the final whistle it was a case of all hands on deck as they successfully frustrated Ballylooby's attempts to score.

The scores were tied at 0-3 each at the mid-way stage and JK Bracken’s laid the foundation for victory with their strong start to the new half. A pair of Dean McEnroe frees had them ahead 0-5 to 0-3 by the 34th minute.

This was the first time that more than a point had separated the sides and JK Bracken’s fought hard to hold onto that advantage until the final whistle.

Another accurate Willie Dunne free gave Ballylooby supporters hope, but those two Dunne frees and Brian Fitzgerald's point from play were the only time that they disturbed the scoreboard in the second half.

Ballylooby made hard work of beating Portroe in the semi-final and leaving their shooting boots behind when they reached the county final meant there was only going to be one outcome. They were also out of luck when Willie Dunne's effort at a point from a free (awarded when Barry Cooney was fouled) struck a post with ten minutes remaining.

Ballylooby's approach play was always decent; the stumbling block was when they tried to apply the finishing touch.

Luke Murphy, who had a tremendous second half, Conor Lonergan and James Morgan orchestrated much of the play while Pierce Murphy, Danny Morgan, Willie Dunne and Michael Murphy were other willing workers.

Kieran O'Donnell was a rock in defence while Brian Fitzgerald gave them a real shot in the arm when he was introduced midway through the second half.

They applied plenty of pressure too in the opening half, but failed to make it count when kicking seven wides and five more on the turnover.

Ballylooby were on top from the throw-in, but missed a succession of chances early on. Those opportunities included a goal chance for Barry Cooney, who had a ground shot well saved by goalie James Farrelly after a mix-up in the defense.

A minute later Ballylooby 'keeper Seán Lonergan punched away an awkward delivery from Andrew Ormond and the opening score of the contest finally arrived from Dylan Moloney (JK Bracken’s) in the 14th minute after Nick Keane and Dean McEnroe had provided the assists.

Ballylooby had a deserved equalizer four minutes later when Danny Morgan and Michael Murphy created the opening for a David O'Halloran's point.

Less than a minute later Luke Murphy gave Ballylooby the lead for the only time in the game. However, they couldn't push on and build on the lead and JK Bracken’s were on level terms again when Andrew Ormond hit the target in the 26th minute.

JK Bracken’s were back in front a couple of minutes before the break when Brian Kennedy scored after he had accepted Dylan Moloney's pass and skipped past a challenge.

It was no surprise that a closely-fought contest was all square at the break when Willie Dunne kicked the final point of the half - that move had started with a great surge by Kieran O'Donnell from defense before being continued by Michael Murphy and Ger Beary.

For JK Bracken’s pacy Andrew Ormond was a constant thorn in Ballylooby-Castlegrace's side while Dylan Moloney and Dean McEnroe also made important contributions to their victory.

The JK Bracken’s panel of players pictured following their win over Ballylooby-Castlegrace in the final of the Tipperary Water County Junior A Football Championship.