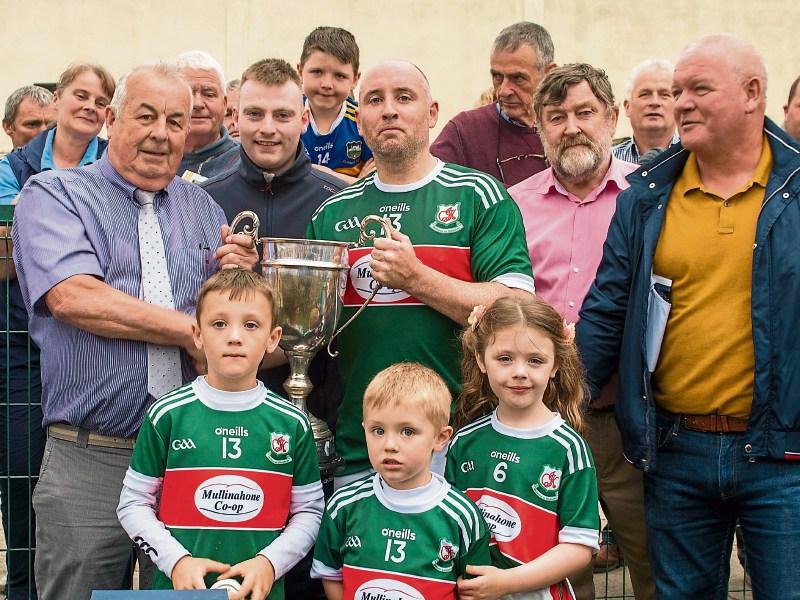 Mullinahone are  South Tipperary senior hurling champions for 2019 after a rip-roaring victory over Carrick Swans in the Clonmel Oil sponsored final played at Clonmel Sportsfield on Sunday evening.

Last champions in 2016, Mullinahone bridged that three-year with a performance full of pride and passion, finishing the stronger to deny favourites Carrick Swan who have now endured two consecutive final defeats having lost last year’s showpiece to Killenaule.

There was little to separate the sides throughout in a final played before a decent-sized crowd, but it was a spurt of six points without reply in a nine minute spell midway through the second half that pulled Mullinahone clear. Try as Swans did over the last few minutes to draw level, the determination of the Kickhams held them at bay and when the referee blew the final whistle victory deservedly belonged to Sean O’Meara’s side.

It was a sweet victory for the ‘Green above the Red’ who were captained and led on the day by a superb display of free-taking by Eoin Kelly, but perhaps it was the display of ‘Man of the Match’ Colin Shelly in defence who drove his side on the most. But make no mistake about it, with backs to the wall and a long injury list at the club, Kickhams dug deeper than ever to mine out this win and put their name back on the Ryan Cup for the 14th time.

And they did it the hard way also after softly conceding a goal inside two minutes to the Swans when Eric O’Halloran’s attempt at a point from out on the wing fell just under the crossbar and keeper Alan Walsh agonisingly let it cross the line in an attempt to touch it over. It was the kind of start no team would want in a championship decider.

However with the aid of the breeze Mullinahone responded well with an immediate point from young Martin Keogh and then three pointed frees by Eoin Kelly to lead 0-4 to 1-0 after a quarter of an hour.

As the tempo upped two fully committed sides then went point for point for the remainder of the half and indeed went to the break all-square at 1-7 to 0-10, having being level no less than eight times over the opening half-hour.

Swans had only their second score of the half in the 17th minute from a Danny O’Hanlon free, which was quickly answered by aKevin Walzer point for Mullinahone.

Another Swans free from ciotóg Gavin O’Halloran followed, cancelled by Martin Keogh’s second point before Gavin O’Halloran made it all square on 21 minutes, at 1-3 to 0-6, with a free after Eric O’Halloran was tackled late.

Eoin Kelly’s fourth free of the evening edged his side ahead but Swans were beginning to get to the pace of the game more and a brace of excellent points from Gavin and Eric O’Halloran gave them the lead temporarily only for Kelly to tie it up once more with another free after 28 minutes.

Danny O’Hanlon finished off a fine move with a point but continuing on the established pattern Sean Curran fed Martin Keogh who pointed to restore parity once more.

Swans corner-back Danny Walsh then  began a move from defence, linking with Dale O’Hanlon before Dean Waters hit a sweet point on the turn. But just when it looked like the Carrick side would take that minimum advantage to the break, Eoin Kelly sent over a monstrous free from his own 65m line.

This score came in the eighth minute of added time, after the game was held up by an injury to Kelly. A minute before that hold-up the Mullinahone captain had attempted to go low with a close-in free but the Swans goalline quintet did their job to deny him.

Inside three minutes of the resumption the Swans were two clear after another Gavin O’Halloran free and a nice point by corner forward Aaron Dunne. 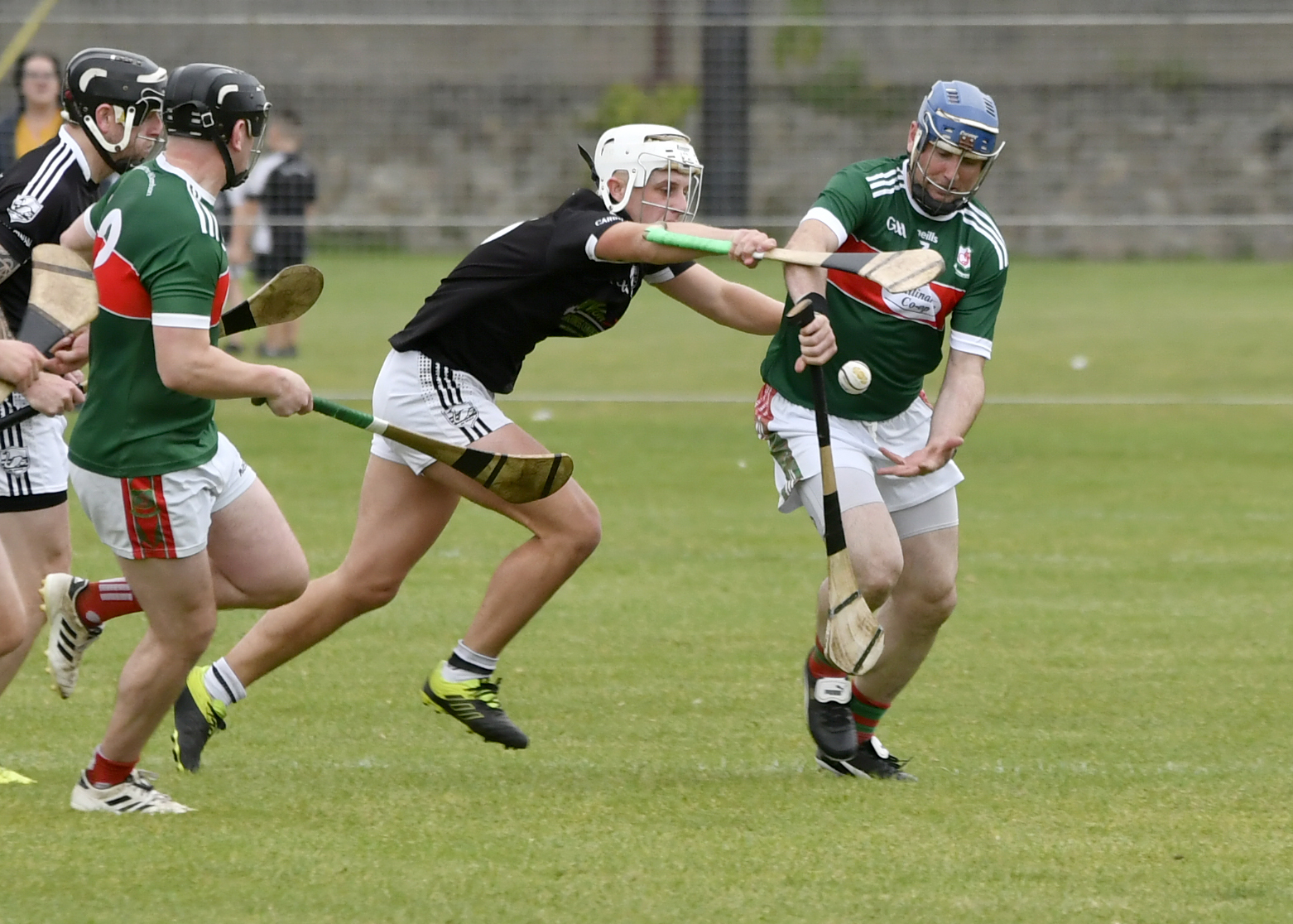 But Mullinahone then got a lucky break when a long range free sailed over the defence and allowed Graham Horan to run on, gather and compose himself before giving Kieran Lonergan no chance with his finish for a vital goal. Five minutes in Mullinahone were back in front by 1-10 to 1-9.

An Eoin Kelly ‘65’ doubled that lead a minute later but the Swans came back with a second point from Aaron Dunne after good work by Dale O’Hanlon.

It was a level game 12 minutes in, when Gavin O’Halloran pointed a ‘65’, and Swan took the lead into the fourth and final quarter after Danny O’Hanlon pointed a free he had won himself when charging through the middle of the Mullinahone defence.

Two further points in two minutes by Aaron Dunne put Swans three points clear and they seemed to be in the ascendency now. But Mullinahone had other ideas and hit a six-points purple patch in nine minutes to put themselves right back in the driving seat.

A rousing point from half-way by Enda Keane was followed by a pair of frees by Kelly to tie up the scores at 1-14 to 1-14 after 52 minutes. It was the 10th - and last time - the sides were level.

Graham Horan then had a long-range point for the lead, followed quickly by a superb point by Martin Keogh, who over his shoulder off the stick, almost on his last legs, put his side two to the good. It was his last piece of action before substitution.

Eoin Kelly then tapped over a free to put his side 1-17 to 1-14 with four minutes remaining.

But in typical style Swans kept coming and in quick succession Gavin O’Halloran with a free and Danny O’Hanlon with the best point of the match from the corner had it back to the minimum as the clocked ticked over into injury-time. But as if their lives were at stake it was Mullinahone who finished with the last score of the night, a sweet effort from Graham Horan before Michael Kennedy brought his first South Senior Final to a conclusion.

The game was a fine advertisement for South Tipperary hurling, played in a great spirt with two fully committed teams giving their all. Mullinahone just had that little edge in experience against a young Swans side whose average age is just 24 and it may well have been that experience - and Eoin Kelly's 10-points haul from placed balls -  that pushed them over the line in the end.

Colin Shelly’s performance all over the defence for the winners was magnificent as time and time again he defended superbly and initiated attacks. The evergreen Paul Curran was a pillar at full-back with Eoin Fennelly and Alan Curran also to the fore. Kevin Walzer and Sean Curran put in industrious stints around the middle while up front Eoin Kelly, Martin Keogh and Graham Horan were chief tormentors of the Swan.

A young Swans team were a credit to their club contributing immensely to a great final. They are in a re-building process and are making great progress this year. They will be disappointed with the result but can take heart from some great displays.

In defence Danny Walsh, Stephen Hahessy, Dale O’Hanlon and Colin Loughman up to the time of his injury went well. Gavin O’Halloran hurled a lot of ball around the middle, while in the forwards Eric O’Halloran, Danny O’Hanlon and Aaron Dunne did most.