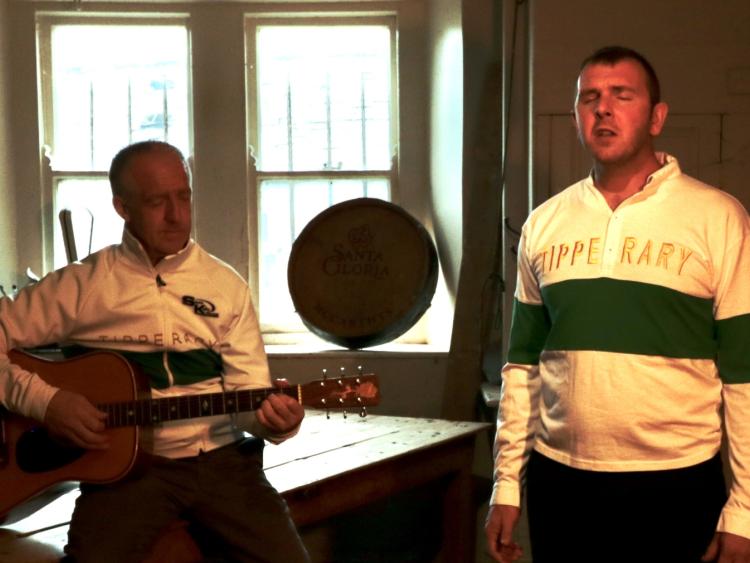 For the year of the centenary of bloody Sunday 1920 Roscrea songwriter Seamus Doran and singer Tadhg Maher had been exploring the possibility of marking the 100 year commemoration by putting a video together to accompany Seamus’s composition, ‘The Ballad of Michael Hogan”, which he composed in 2007.

Despite the difficulties and restrictions imposed by the current pandemic, the two great friends, along with the help and support of some dedicated colleagues and fellow Gael’s, coupled with some innovative thinking, have succeeded in bringing the project to fruition.

In 2019 Séamus had spoken to Barry O Brien, former Tipperary County Board Chairman, about the idea of the video for 2020. Barry thought it would be a fabulous addition to the commemoration calendar, so directed Séamus on to Chairman of The Tipperary GAA Bloody Sunday Commemoration Committee”, Séamus McCarthy who also enthusiastically endorsed the project.

However, as 2020 unfolded, the Covid pandemic played havoc with events that were planned for the Centenary, and cancellations and postponements became the norm. Nevertheless, Séamus and Tadhg remained undaunted, and resolved to complete their latest project in time for posting on Youtube and Facebook on November 21, the anniversary of Bloody Sunday.

As Séamus McCarthy is living in Kinsale, meetings were not possible because of travel restrictions, but the former Tipp Football Manager not to be outdone, asked two members of the committee, Enda O Sullivan (PRO) and John Flannery, both from Nenagh, to liaise with Séamus and Tadhg.

So when restrictions were relaxed, the four met at the Obama Plaza Moneygall to discuss what could be done to move the project forward.

What a productive meeting it turned out to be, with the four pooling their talents, ideas, and resources, and as the saying goes, “the rest is history”.

Tadhg smiles, as he recounts, “our first issue was that same, age old issue”,” MONEY”.

The subcommittee did not have funding available to them for the editing of the video, so after deliberating on the dilemma, they contacted Labhrás Ó Murchú, Director General of Comhaltas Ceoltoirí Éireann, who looked favorably on their submission, and kindly agreed to give funding for the project.

Their primary objective was to locate as many authentic images as possible to include in the video and appropriately accompany the lyrics of the song, with some top class creative editing, and in so doing, bring an educational element to the production.

Having secured funding, Thomas Moyles owner of Avalanche Multi-Media Studios Nenagh was engaged to be the man behind the camera, a filmmaker, whom Séamus and Tadhg had worked with before, and were very impressed by his professionalism and attention to detail.

Next on the agenda was a location for some footage of Séamus and Tadhg.

Séamus recalls the many options that were put forward, when, “out of the blue, John Flannery suggested Fethard, much to the bewilderment of the rest of us”. Then John informed us that the table that Michael Hogan sat at for his last meal before leaving for Dublin in 1920, was actually still in the pub, McCarthy’s of Fethard."

So contact was made with owner Vincent Murphy, a grand nephew of Gus McCarthy who was on the 1920 Tipperary team. Gus was extremely helpful and accommodating, and the footage was duly completed when restrictions allowed.

A worthy way to start the video was put in place when Séamus contacted his old friend, the ever approachable Fran Curry, of Tipp FM Radio, who was only too delighted to come on board and record the audio introduction that gives a little of the background to the project.

As well as having the distinctive and recognizable voice of Fran, the introduction also includes the corresponding subtitles “as Gaeilge”, in keeping with the promotion of our native language.

Proud Tipperary man Louis Fitzgerald, originally from Cappawhite provided photos of the match ball and an original ticket. “We were on a roll at this stage”, exclaimed Séamus.

“A suitable and appropriate ending was deemed essential for the recollection of such a poignant time in our history”, remarked Tadhg.

Step in, John Connors historian from Borrisoleigh, a mutual friend of Séamus and John Flannery, who is doing a huge amount of work in gathering material relevant to the War of Independence, which can be viewed online, and on the Facebook Page; “Soloheadbeg Centenary “.

John had photographs of all the headstones of the 1920 Tipperary team, bar three.

John had discovered two were in New York, (Jimmy Doran of Mullinahone, and Ned Shea of Fethard), and the other was in Deansgrange, (Lt Col Tommy Ryan of Castlegrace).

Once again travel restrictions proved an obstacle, so Séamus made contact with another GAA friend, Jim Kilty. Jim kindly obliged, and images from Deansgrange were duly secured.

Brendan enlisted the help of Nuala Purcell, originally from Gortnahoe, who left no stone unturned in locating the two headstones and getting photos to Séamus and Tadhg.

Unexpectedly , a couple of priceless images were acquired for the video, when Brendan Maher found a programme and team photo of the Roscrea Senior Hurling Team which played O’ Tooles of Dublin in a Hurling Challenge in Croke Park on November 23, 1969. On November 22, the Grangemockler Club intend to unveil a statue to honour Michael Hogan.

A photo of the statue was provided by Club Officer, JJ Crowley to be used as the final image, and brings a very apt and most fitting conclusion to this captivating video, that respectfully recounts that ill fated Sunday Afternoon, on November 21 1920.

Séamus Doran is a songwriter and musician, from Roscrea. An admirer of many genres, Séamus began writing as a teenager and has compiled three CD’s of original material.

His composition “The Mighty Blue & Gold” sung by Tadhg Maher and Carmel Minogue was featured on RTE’s “Up for the Match” in 2009, and he also penned “Sixty Years Ago”, which was a number one hit for country star Derek Ryan.

In 2007, Séamus composed a remembrance song entitled The Ballad of Michael Hogan, which featured on his album “Against the Grain”, powerfully sung by All-Ireland Champion singer Tadhg Maher.

The song was also included on The Tipperary County Boards’ CD; “The Mighty Blue & Gold, as part of their initiative to celebrate the 125th Anniversary of the GAA in 2009.

To mark the centenary of the event, Seamus and Tadhg, in association with the Tipperary GAA Bloody Sunday Commemoration Committee, and with kind sponsorship from Comhaltas Ceolteorí Éireann, have produced this video to honour the memory of Michael Hogan, and indeed all those who were killed and injured in the atrocity at Croke Park 100 years ago.

“It has been an honour and a privilege for us to be alive in 2020, to celebrate the centenary of 1920, and contribute in some small way, through this song and video, with pride, to the remembrance of our heritage, and pay tribute to the people who died.

To all who helped us in any way; Míle Buíochas,” the duo told the Tipperary Star.