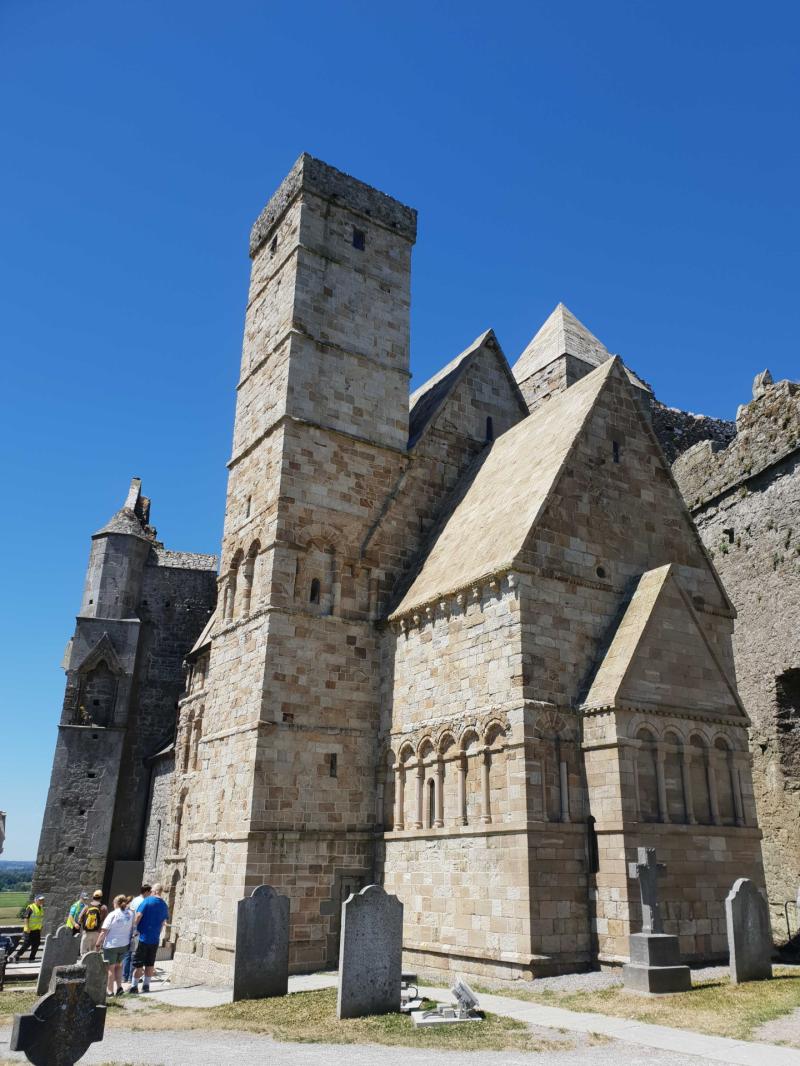 The Office of Public Works (OPW) has welcomed the official re-opening of Cormac’s Chapel, an Irish Romanesque style building which forms part of the Rock of Cashel complex, following an extensive conservation project.

The project involved extensive works over a period of time to replace the failing roof of the Chapel and address the issue of water penetrating into the building and causing damage to the historic interior.  The Chapel is now safe from the effects of rainwater which can no longer leak into the building and the walls have been allowed to progressively dry out, revealing the wonderful remnants of the medieval wall paintings inside.

“We in the OPW are delighted to present the completed Cormac’s Chapel to visitors again. This has been a really technically difficult and complex conservation project and we are delighted that it has turned out so well.  We are sure that visitors will agree with us when they see the magnificent wall paintings which have now been saved by the conservation action we’ve taken,”, said John McMahon, OPW commissioner.

The Rock of Cashel is a spectacular collection of buildings set on an outcrop of limestone and is one of Ireland’s most important early medieval monuments.  A fortress is said to have existed on the site from the 4th or 5th century and the name itself, Caiseal in modern Irish, is an early borrowing from the Latin, castellum, meaning fort.

Cormac’s Chapel is situated on the south-east side of the main cathedral and is not only one of the most significant early Romanesque style buildings in Ireland, but contains the fragments of an immensely important scheme of wall paintings. The paintings had suffered deterioration due to the poor environmental conditions in the Chapel; both liquid water and water vapour made the walls extremely wet and led to algal growth obliterating the paintings from view and gradually eroding them completely. The condition of the building, although structurally stable, was also identified to be extremely vulnerable to penetrating rainwater and this led to the decision to carry out this extremely challenging and complicated conservation project.

“In January 2010, to allow the building structure to dry, and to provide access to the roof and protection during the repair work, a roofed and enclosed scaffolding was erected over Cormac’s Chapel.

“This scaffold dominated the skyline over Cashel until early this year and I know it was a source of much comment locally, but thankfully, we can all be happy that it did its job,” Mr McMahon continued.

The commissioner also said eliminating a significant amount of water from the structure has ensured that the very precious wall paintings, which have now been professionally conserved, are preserved for future generations and can once again be viewed by visitors to the site. “The re-opening of Cormac’s Chapel offers the visitor a really special treat. Tours of the Chapel are now available daily on a first-come, first- served basis with an extra flat-rate charge of €3.

“In order to continue to preserve the humidity levels within the Chapel, we have had to restrict access so daily visitor numbers will be limited,” he added.