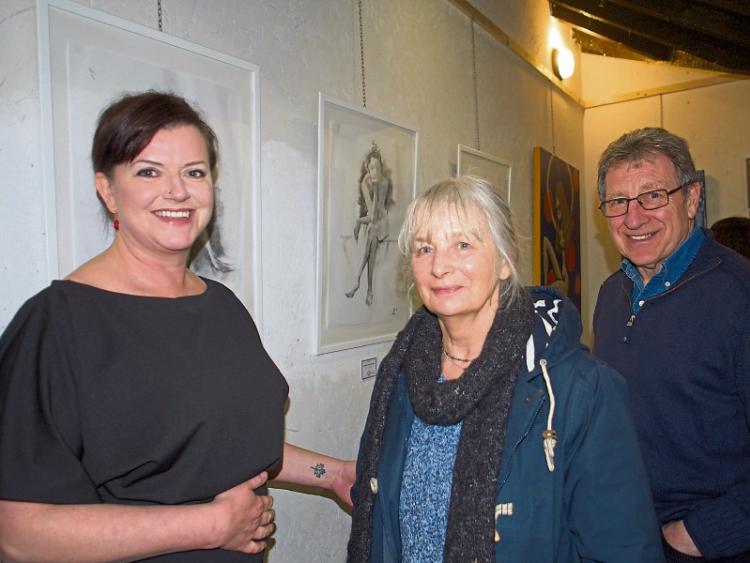 Artist Mia Carney, who curated the exhibition with artist Sheila Wood, whose work was featured in the exhibition and Ken Wood. Picture: Anne Marie Magorrian

The Through her Eyes concert and exhibition staged at Brewery Lane Theatre to celebrate International Women's Day was a sell out and raised more than €1200 for Carrick-on-Suir's Tudor Artisan Hub's planned facelift.

The show on Saturday, March 7 featured performances from 17 women from Carrick-on-Suir, the Suir Valley region and beyond and an eclectic exhibition of art by artists, whose work is on display and sale at the Tudor Artisan Hub on Carrick-on-Suir's Main Street. The exhibition was curated by Mia Carney.

The evening of entertainment was a mix of original and cover music and song, drama, interpretive ballet, recitations.

Linda Fahy described the concert and exhibition as a “liberating, impassioned and inspiring” celebration of women in the arts.

She said the concert and exhibition attracted a full-house at Brewery Lane Theatre and the funds the event raised will go towards funding the painting of the exterior of the Tudor Artisan Hub and new signage for the building.

Ms Fahy paid tribute to everyone who attended and contributed to the event by sharing their time and talent. She also thanked the  concert and exhibition organisers, the show's technical team, Brewery Lane Theatre volunteers and the artists who donated prizes for the raffle.

More of Anne Marie Magorrian's photos from the Through Your Eyes show and exhibition are published in the print edition of The Nationalist now in shops.