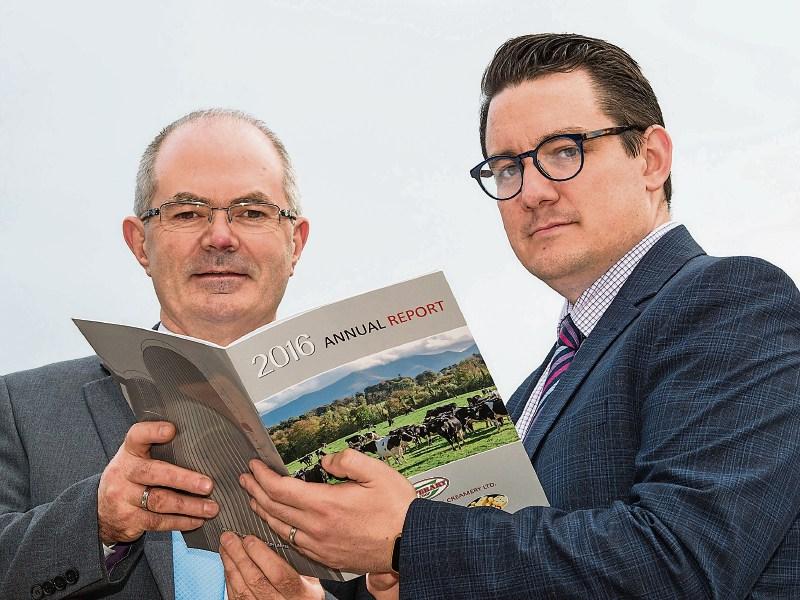 Tipperary Co-op has reported a turnover of €171.5m and a profit before tax of €2.3m for 2016, according to its annual report, which was released Friday, June 23.

Commenting on the 2016 performance, chairman Richard Donovan said: “I am pleased to report continued progress in 2016 by Tipperary Co-op, especially in the areas of product and market development where Tipperary as expanded its markets for cheese and whey.”

“The poor returns from international dairy markets in the first half of the year impacted significantly on the co-op’s Irish dairy processing business. However, this was balanced by a better than expected performance of our subsidiaries and the scale efficiencies achieved through processing the larger milk volumes.”

In relation to the co-op’s efforts to support farmer members the chairman added: “While the early part of 2016 was a difficult one for dairy farmers, Tipperary Co-op continued to support its milk suppliers with savings made through operating efficiencies and the premiums achieved from our ongoing product and market developments. As a co-operative the importance of returning a profit while supporting our members cannot be overestimated. Throughout the year the board of Tipperary maintained its twin focus of farmer support and business development by supporting farm gate milk price during the year and recording a prudent profit before taxation of €2.3m.”

The co-op has paid a strong competitive milk price, while also enhancing the value and strength of Tipperary co-op itself Mr Donovan said.

Providing an overview of the operational performance of the business, newly appointed CEO, John Daly, said: “Tipperary Co-op continues to see the benefit of the unprecedented level of investment in the business in recent years. This investment has been focused on new and upgraded processing facilities, business efficiency improvements as well as marketing and product portfolio development.”

He said that 2016 also saw the continued expansion of the co-op's successful overseas business, especially its French subsidiary Tippagral SA, which grew sales of its Emmental cheese to the European market.

Tipperary Co-op has a balanced market spread with dairy product sales across Europe and the US where Ornua helps support our marketing and sales development.

The year also saw Tipperary strengthen its position as a significant supplier to the infant formula and ingredients sectors.

“We continue to see potential for increased milk production in the Tipperary Co-op catchment area. A 7 per cent growth in 2016 followed a 16 per cent increase the previous year. It is interesting to note that Tipperary milk suppliers have exceeded the national trend in this regard,” saisd Mr Daly.

Tipperary Co-operative had effectively managed the transition to milk volume growth through a combination of upgraded processing facilities and strengthened commercial partnership.

“This brings great potential to our business and we feel confident of the benefits that should accrue to milk suppliers while providing an increased contribution to the local economy,” he said.

Financial controller Barry Hannon presented the financial statements for the year and emphasised: “Continued high volumes of milk have extended improvements in scale efficiencies and the savings achieved were passed on to milk suppliers where possible. The impact of the low market returns for our core products in the early part of 2016 was a factor in Tipperary Co-op’s performance but this was counteracted by a good performance in Tippagral, the French subsidiary company.”

Cash inflow from operating activities amounted to €5.4m while shareholders’ funds now stand at €34.3m. Overall Tipperary Co-op retains a strong balance sheet at year-end and a good relationship with its banking partners. The further strengthening of its balance sheet during the year combined with a very prudent level of net debt provides a solid foundation for the business as we plan for continued post quota growth, Mr Hannon said.