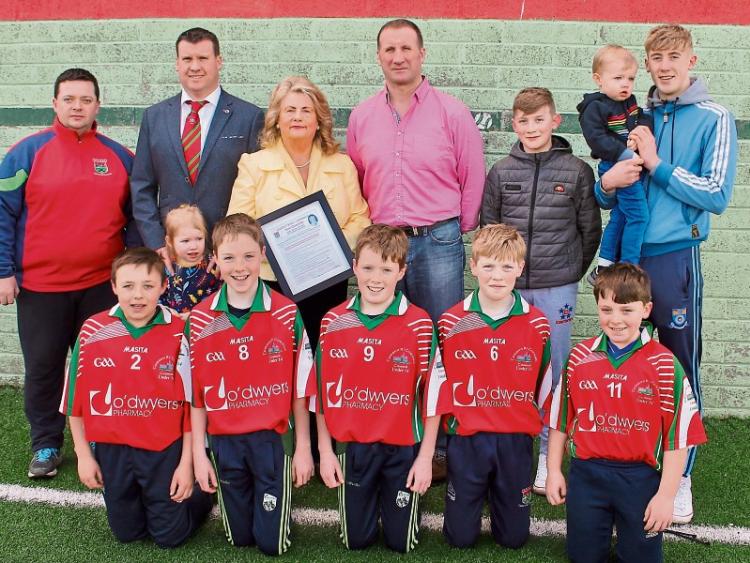 Preparations are well underway to hold our annual Easter camp.

This year the club has named the camp after the late Tom Connolly. Tom was always to the fore within the club for many years in various capacities and it is a fitting tribute and recognition of his sterling service.

A proud occasion also for Ann, Elizabeth, TJ, Jason and the extended families. So we are in for a busy week of fun and games - hopefully the weather is good and everyone has a great time. The camp is open to all our existing members and Camogie Club also. New members are welcome.

It will run from Tuesday April 3rd to Thursday the 5th, from 10am to 1pm each day. Once again Eileen will be on hand to co ordinate and ensure everything runs smoothly as always. A final registration opportunity takes place this Saturday in Leahy Park from 10.30 to 11.30.

Our Minors sealed a late victory over Cappa Gaels to secure a place in the West Minor A final on Saturday night last.

This was a tight game with very little separating the sides for the majority of the game. However Cashel saved the best for last, a flowing move with some lovely inter play setting up James O'Sullivan and he coolly slotted the ball to the Cappa net to seal victory 1-5 to 0-5. Cappa now play Galtee/Golden with the winners renewing rivalry with Cashel in the Final.

Our hurlers bounced back from an opening round defeat to Kickhams by edging out Lattin Gaels 1-21 to 1-17.

Had Cashel been more ruthless in front of goals the winning margin could have been more but the lads will take the win and continue to work on things during week. Next up is the West Championships quarter Final with Arravale Rovers providing the opposition. The game is fixed for Golden next Saturday throw in 4pm in Golden.

Our U14 Hurlers suffered a narrow defeat to Kickhams in the West Feile Semi Final on Monday 19th March in Leahy Park.

Despite losing, Cashel can take pride in a very hard working display. Luck deserted us on the day and the Boys showed they have the potential to do well in the Championship.

Our scorers were, Ronan Connolly 0-2, David McGrath & Fabian Ryan 0-1 each.

Well done to our Under 14 footballers who won the West Final in the Peil B Saturday evening, in Leahy Park. They now go on to the county semi final.

Cashel were well on top in the first half but they knew Galtee would come out fighting in the second half and they did but the Cashel backs kept their heads and showed great character to hold off most of the Galtee advances. Final score : King Cormacs 2-4 Galtee Rovers 0-3.