Plough and the Stars back for 'one night only' 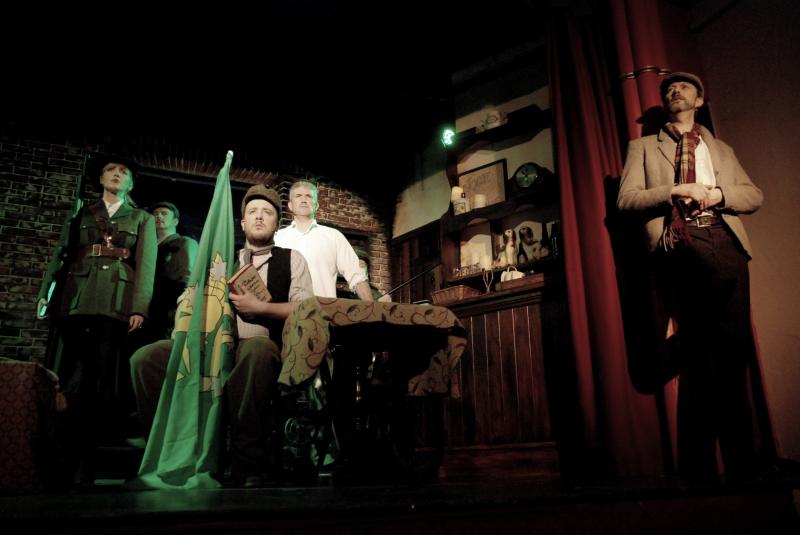 The opening score of The Fr Mathew Players production of The Plough and The Stars was enough to peak my interest, set in the midst of the Easter Rising of 1916 the curtain opened to a scene set so perfectly I couldn’t but sit up and take notice.

The opening song, The minstrel boy was performed by Camillus Croke in a gentle, natural tone accompanied Maria McGrath and a rousing chorus of the complete cast. Clodagh Ryan making her debut with the players danced so beautifully as she symbolised Ireland. You could hear a pin drop during these opening scenes finished off with her effortlessly sweet voice to rousing applause.

Over the next 2 hours we were tossed into the turbulence of these times past, The audience were paying such undivided attention to the fast moving script of O’ Casey, that at times I had to glance around to ensure I wasn’t alone in the wonderfully cosy hall in New Inn.

The players weaved seamlessly in and out of scene after scene, reeling us deeper into their story as they went. Nora, played so powerfully by Lena Hally her evident love for her husband Jack, played by Micheal Fitzgerald being her eventual downfall, had us close to tears on several occasions. As they giggled and played so naturally together on stage you couldn’t but believe their story. Micheal shone as Jack Clitheroe, confident in his role he was powerful and convincing as he portrayed both the part of the caring husband and the ruthless solider.

Mollser played by the beautiful Clodagh Ryan broke our hearts as she battled with consumption and we prayed she would make it. Sadly it wasn’t to be. Although we did not see him on stage until the curtain call, those of us familiar with the Fr Mathew Players could not miss the fact that it was the voice and action of Jimmy O’ Farrell proclaiming from the shadows as the Orator on the street.

As with all good dramas there is of course those characters who bring the comedy to break from the sadness and seriousness of what was unfolding before us, Bessie played by Maria O’ Shaughnessy did not disappoint, her flawless ability to crack a joke and natural turn of phrase had the audience in stitches, playing opposite her was Margo Fogarty as Mrs Gogan, who had the entire hall in uproar with her brilliant rants and raves.

Kieran Heaney played Uncle Peter in a way only he can, with class and style, Willie Flynn brought us The Young Covey a part made for him, he was perfectly rehearsed and didn’t miss a beat. Fluther played so remarkably by Karl Mchugh and Rosie Redmond, played effortlessly by Maria McGrath had wonderful on stage chemistry keeping us well entertained. The band of soldiers played by Eddie Golden, Richard O’ Loughnan, Camillus Croke and Tom Fitzgerald convincing in their portrayal added an air of fear and sadness among us, I was thrilled to see Tom Fitzgerald gracing us with his presence on stage this year, he Camillus and the recognisable voice of Jimmy O’ Farrell brought the audience to their feet as the curtain dropped closing off the final scenes.

A powerful performance from all involved, A fantastically talented cast and a play picked to perfection to suit the players- Just wonderful, a 5 night run with a taste for more has led the players to showcase one final performance on Thursday 16th March at 8pm, tickets available once again through Eileen Hally on 087 6334381 Purcell’s Shop New Inn 052 7462174 Friary Pharmacy Cashel 062 61318- Tickets €15. If you missed it, make sure to book your seat.