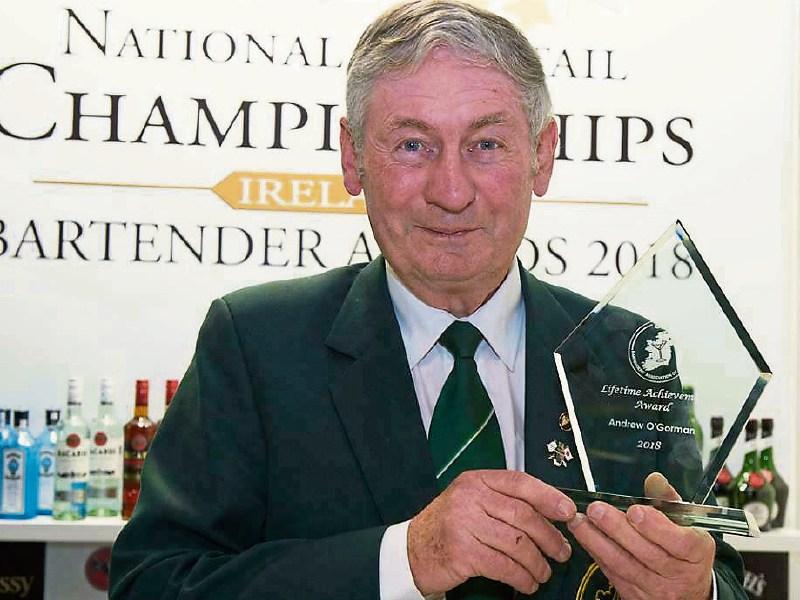 Newport barman Andrew O'Gorman has been honoured by his peers with a lifetimaew acheivement award.

He was presented with the award by Declan Byrne, president of the Bartenders Association of Ireland at the National Cocktail Championships and Bartender Awards in Dublin.

Accepting the honour, Andrew said that he was "humbled and proud to receive such an honour, particularly with such a great family of bartenders in attendance and particularly in the presence of guest judge Hidetsugu Ueno, International Bartender of the Year, from Bar High Five, Ginza, Tokyo. I visited Hidetsugu Ueno in his bar in Tokyo a few years ago and I will always remember him for his professionalism and welcome."

Andrew has been involved with the Bartenders Association of Ireland for many years and has held the positions of president, secretary, treasurer and education chairman, and is an honorary life member.

With the ending of pubs closing on Good Friday, Andrew pointed out the many religious connotations between religion and the bar trade.

Andrew, who was born in Newport and raised in Emly, has published a number of books on the licensed trade and has acted as a judge at various competitions nationally and internationally. He has attended the International Bartenders Association World Cocktail Competitions and Congress in various countries since 1979.

He received an International Journalist Award in 2013. This award is dedicated to the best journalistic or literary works that have as their theme the profession of the sommelier.

He is a committee member of the Tipperary Association Dublin, secretary of the Irish Guild of Sommeliers and treasurer of the Bartenders Association of Ireland.