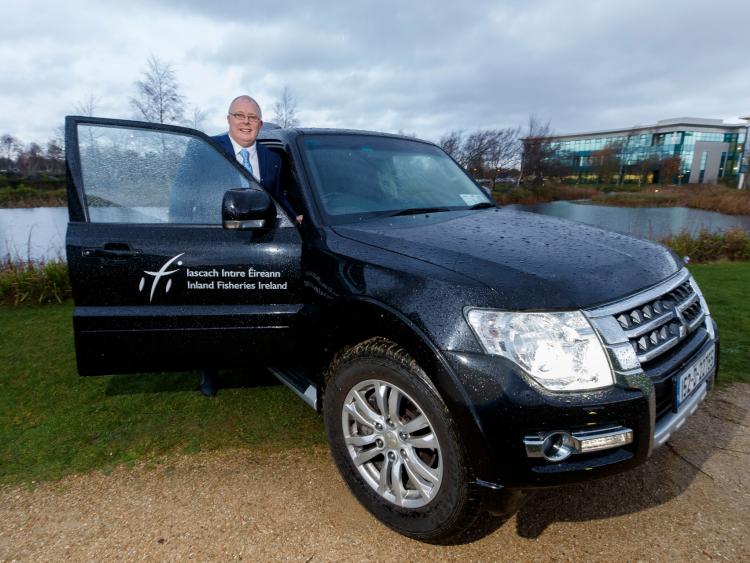 Michael Burke, from Thurles, Co.Tippeary who is Logistics Manager at Inland Fisheries Ireland

Michael Burke, from Thurles Co. Tipperary, is Logistics Manager with Inland Fisheries Ireland and in the past week, he has received two separate road safety and fleet awards. The Road Safety Authority of Ireland has awarded Burke with its ‘Leading Light Award’ for road safety in the public sector while the Freight Transport Association of Ireland has awarded Inland Fisheries Ireland with a ‘Van Safe’ Award.

The awards follow a significant review of the Inland Fisheries Ireland’s fleet and transport requirements, led by Burke, across the country over the past year. The organisation has over 300 staff with many using vehicles to allow them to carry out their protection, environmental and research duties, often in rural and peripheral locations.  Ireland has 5,600km of coastline, 70,000 kilometres or rivers and streams and 144,000 hectares of lakes and ponds, all of which fall under Inland Fisheries Ireland’s remit. Its fleet consists of 200 vehicles including cars, car-vans, SUVs, panelled vans, 4 x 4 jeeps and trucks in addition to on-water vehicles.

The Road Safety Authority of Ireland presented Michael Burke with a ‘Leading Light in Road Safety’ Award on Wednesday, December 12. The RSA received over 100 nominations from all over Ireland for individuals, schools, businesses, community groups, colleges and organisations who have worked tirelessly in 2018 to promote road safety and save lives. Michael Burke, who manages the organisation’s fleet, was recognised in the Public Sector Category.  The organisation also received a ‘Van Safe’ Award from Freight Transport Association which distinguishes those operating a van fleet at the highest level of industry best practice, compliance and safety.

Over the past year, Burke has made a number of improvements in how Inland Fisheries Ireland manages its fleet from a safety and efficiency perspective. The organisation has introduced a Driver Manual for staff, rolled out driver safety training, implemented a Fleet Management System, retired vehicles from operational use which were not fit for purpose and is currently providing new vehicles which are energy efficient.

As a result of recent improvements, Inland Fisheries Ireland is seeing to achieve a 24 per cent reduction in the Co2 emissions from its fleet, contributing towards its target of reducing emissions by 33 per cent by 2020. The organisation plans to introduce four new energy efficient electric vehicles in 2019 on a pilot basis with a view to continuing the progress made in decreasing its carbon footprint. It will also look to further manage vehicle utilisation to ensure the fleet is being used in the most efficient and appropriate manner and that driver safety remains a priority.

In his roll out of a number of fleet management activities, Burke was able to draw on his 30 years transport and fleet experience with previous positions held in An Post, Howley Plant, DAF Trucks, Air Lingus and the Liam Carroll Group in Thurles. He was appointed Logistics Manager at Inland Fisheries Ireland in January 2017, overseeing warehousing and fleet management. Burke is a member of the Chartered Institute of Logistics and Transport (CILT) and the Institute of Road Transport Engineers.

Michael Burke, Logistics Manager at Inland Fisheries Ireland said: “We want our staff to come into work safely, to drive around safely, and then go home safely. That is our priority. As an environmental agency, we also want to operate in a manner which is energy efficient and we are keen to reduce our carbon emissions as soon as possible.

With the recent improvements made in our fleet and ongoing compliance of our staff, we hope to improve our performance in this regard over the next 12 months. These awards recognise the work which has been done by the organisation to date and I also hope they also act as a catalyst to ensure continued success on the safety and efficiency fronts.”

Dr Ciaran Byrne said: “Our staff work day and night in the field protecting and managing our fisheries resource. Driving is naturally a key component which allows them to reach the river or shore, wherever they need to be for a patrol, a covert operation, an environmental inspection or research activities.  It is vital that we support them and ensure the right measures are in place to allow them travel in a safe manner.

“Our staff have engaged on safety training, adapted to our new fleet management system and are working with us in ensuring our fleet us up to a professional standard. I would like to congratulate our Logistics Manager Michael Burke and the team who have managed this process and also recognise the efforts of our staff nationwide who are utilising the fleet in the most efficient manner, which allows them to carry out their duties as custodians of the fisheries resource.”