PARTY HAS UNFINISHED BUSINESS IN TIPPERARY 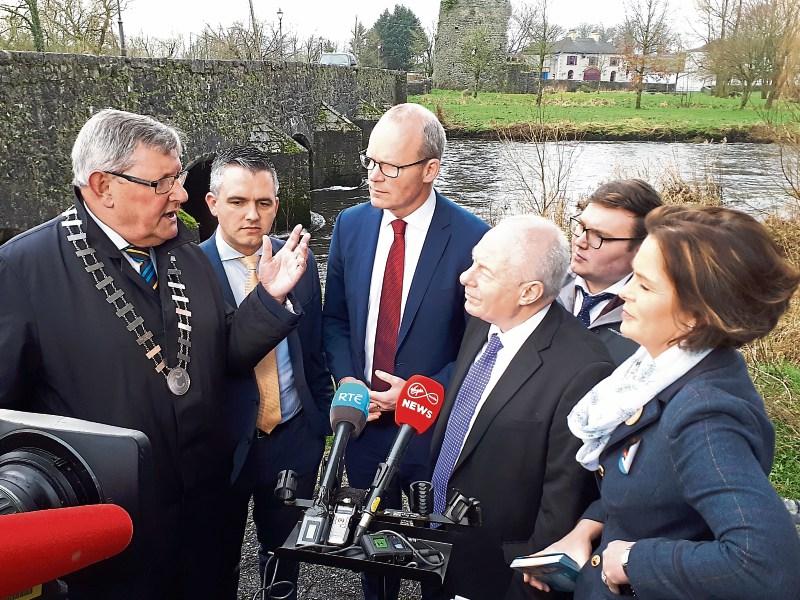 Four days after Taoiseach Leo Varadkar visited Clonmel, another government heavyweight was in Tipperary today when Tanaiste Simon Coveney went on a canvas in Golden, Cashel and Tipperary.

And the Tanaiste, who was joined by cabinet colleague Michael Ring, stressed that Tipperary is a priority for Fine Gael and is very much a target constituency for a seat gain

“Tipperary is a Fine Gael county and Tipperary without a Fine Gael TD is unfinished business and we intend to correct that.

“We have two excellent candidates in Garret Ahearn and Mary Newman Julian and we intend to make sure that we have one TD in the next Dail, and hopefully two”, he told journalists in Golden.

The Tanaiste used the occasion to attack Fianna Fail, and in particular party leader Miceal Martin, on their stance on the National Broadband Scheme.

“There are 1.1m people in the country, and thirty thousand businesses across Tipperary, without access to high speed broadband that suffer from all the disadvantages that lack of access bring. Micheal Martin said he doesn't support our scheme and won't sign up to it so what does he say to all these people and businesses. We will be investing €118m in Tipperary to provide high speed broadband. What will Micheal Martin's answer be to that? He doesn't have one”, the Tanaiste said.

At the press briefing in the shadow of the famed Golden bridge, Minister Ring outlined the extent of the government investment in rural Tipperary and across the country.

Welcoming the two cabinet ministers to his home village, local councillor and chairman of Tipperary-Cashel-Cahir municipal council, Michael Fitzgerald, presented both with Tipperary ties that he hoped would bring them luck in the future.

Mayo man Michael Ring said that Tipperary is well used to All Ireland hurling success but his home county could do with some luck in its bid for All Ireland football success.