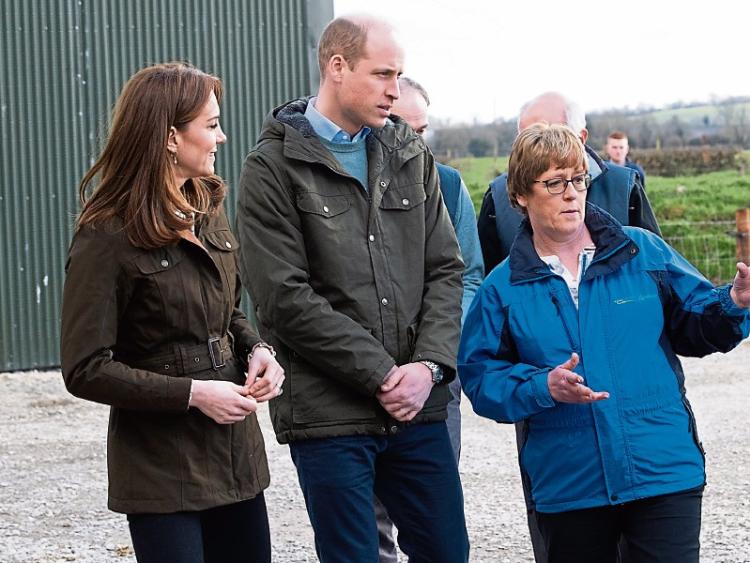 Countryside management specialist Catherine Keena, who lives near Carrick-on-Suir, was among the  Teagasc staff who met Prince William and Princess Kate during their visit to Ireland last week.

Catherine, who lives on a farm at Kilballyquilty, Carrick-on-Suir, Co. Waterford, was one of the agricultural experts who spoke to the Duke and Duchess of Cambridge about her work during   their visit to the Teagasc farm at Grange, Co. Meath last Wednesday, March 4.

She talked to the royal couple about the initiatives on the Teagasc Grange farm and on other farms around the country to promote biodiversity and develop hedgerows so they are fit for both birds and bees’, providing suitable nesting sites and berries for the birds, and plenty of flowers for pollinators.

As part of her presentation, the Kildalton Agricultural College based expert showed the Duke and Duchess samples of native hedgerow shrubs such as whitethorn, blackthorn, hawthorn, hazel and willow she gathered from hedgerows in her locality. She also featured native flowers such as primrose and celandine that are valuable food sources for pollinating insects.

“Prince William said it brought back memories of when he laid hedging  with his father on their own land,” said Catherine referring to  Prince  Charles, who is a passionate advocate for the environment.

The blackthorn in her display boasted its first flower of spring. Catherine says these flowers are popular foods for bees at a time of the year when there are not yet many flowers growing. She also told the royal couple how catkins on  willow and hazel were also very important food for bees at this time of the year, which many people don't realise.

Prince William and Kate were officially welcomed to the Teagasc Grange farm by Minister of Agriculture, Food and the Marine Michael Creed, Teagasc chairman Liam Herlihy and other senior Teagasc figures. They also met with a number of farmers who spoke to them about what they are doing to farm with nature on their respective farms.

Beef researchers showed the Duke and Duchess three cows, each with twin calves, from the Derrypatrick demonstation suckler herd at the Teagasc Animal and Grassland Research and Innovation Centre at Grange and highlighted the steps being taken on Irish cattle farms to ensure beef is produced in an environmentally sustainable way.