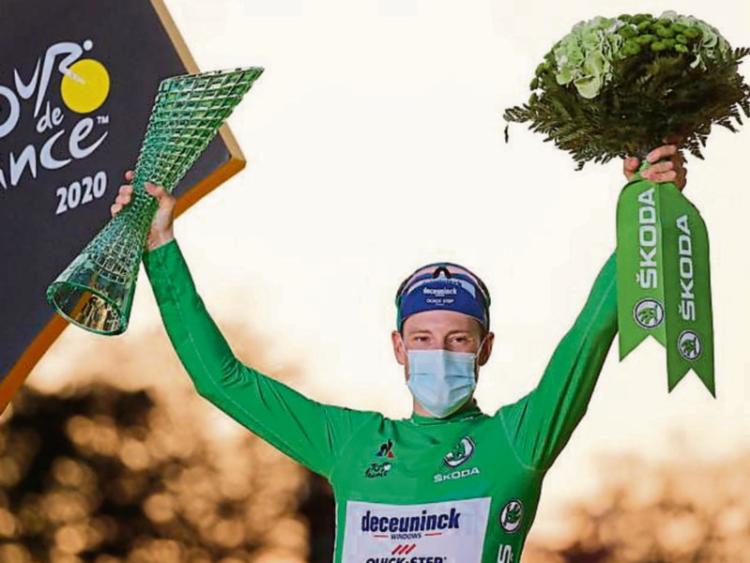 The council’s Corporate Policy Group unanimously decided at its meeting on September 11 to recommend to the local authority’s councillors that a civic reception be accorded Mr Bennett, who three days earlier won the 10th stage of the world’s most famous cycling race.

The Carrickbeg man went on to also win the Tour’s final stage that finished on the Champs Élysées and the coveted green jersey. The last Irish cyclist to win the green jersey was fellow Carrick-on-Suir man Sean Kelly.

Ger Walsh of Tipperary County Council’s corporate services department said Sam Bennett’s family will be contacted to check if he is agreeable to a civic reception being accorded before the recommendation is put to a council meeting.

Mr Walsh doesn’t expect a reception will take place this side of Christmas due to the fact Mr Bennett is living abroad and the Covid-19 restrictions.

A civic reception is the highest honour the county council can bestow and the council’s plans to honour Mr Bennett were mentioned at Carrick-on-Suir Municipal District’s monthly meeting last Thursday where a vote of congratulations was passed  by the District’s councillors.

Leading the tributes was Carrick-on-Suir MD chairman Cllr Kevin O’Meara, who said he wished to congratulate Mr Bennett on his great win  and brilliant performance in the Tour.

Carrick Cllr Kieran Bourke also congratulated Mr Bennett. He said  an opportunity for the council to honour him was a work in progress and pointed out the cyclist was not likely to be back in the country until at least Christmas.

Fellow Carrick Cllr David Dunne said Sam Bennett’s “massive achievement” in the Tour de France gave Ireland a welcome lift.    Mr Bennett and former Tipperary hurling star Eoin Kelly, who captained Mullinahone hurlers to win the Seamus O’Riain Cup, were great role models for young people in Tipperary. Cllr Dunne added that Sam Bennett missed out on his youth because he was so dedicated to cycling. “He wasn’t out partying like others,” he noted