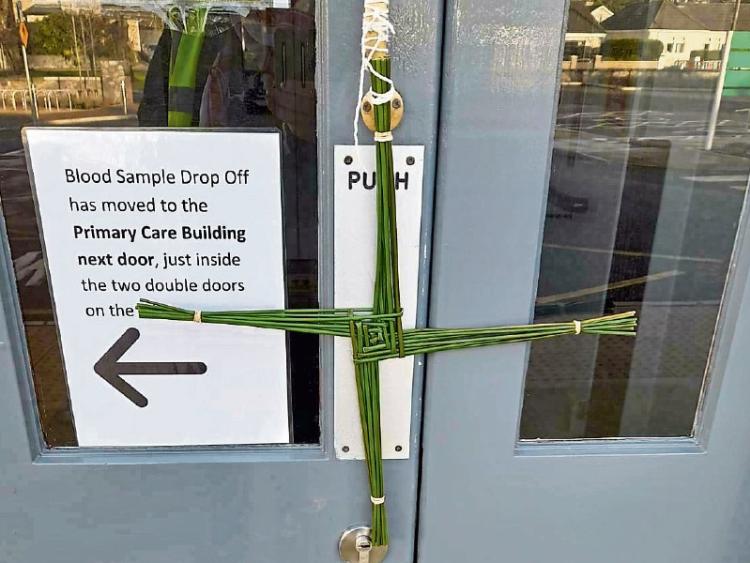 Carrick-on-Suir people angry over the closure of St Brigid’s Hospital have been decorating the building with St Brigid’s Crosses over the past week as part of their campaign of protest.

Traditional St Brigid’s Crosses made from reeds have been hung on windows, doors, drain pipes and walls around the hospital in the lead up to the saint’s annual feast day next Monday, February 1.

He reported that last Saturday’s Save St Brigid’s “drive-by” protest around Carrick-on-Suir attracted an even bigger convoy of vehicles than the previous week when an estimated 160 vehicles took part.

The drive-by protests, which start and finish at St Brigid's Hospital, have replaced walking march protests during the Covid-19 Level-5 restrictions.

Mr Reade said they plan to continue the drive-by protests every Saturday afternoon for the forseeable future.

Meanwhile,  Cashel based Sinn Féin TD Martin Browne was the latest Tipperary Oireachtas member to raise the closure of St Brigid’s Hospital with Taoiseach Micheál Martin in the Dáil.

He told the Taoiseach last week that St Brigid’s Hospital’s campaigners  deserve a meeting with Minister of State for Older People Mary Butler to make their case for the reopening of the district hospital.

He complained that Minister Butler had refused to meet the local campaign group and accused her of “effectively dismissing” the concerns of local people.

He called for the  meeting between Minister’Butler and a Save St Brigid’s Hospital campaign group delegation  to be arranged.

Deputy Browne said he asked if the HSE looked into how much it would cost to bring St Brigid’s up to the standards the HSE maintains it currently doesn’t meet before it decided to close the district hospital and repurpose   as community healthcare centre.

He pledged  to  follow up with the Government to get  answers to this and his other queries in relation to St Brigid’s Hospital.