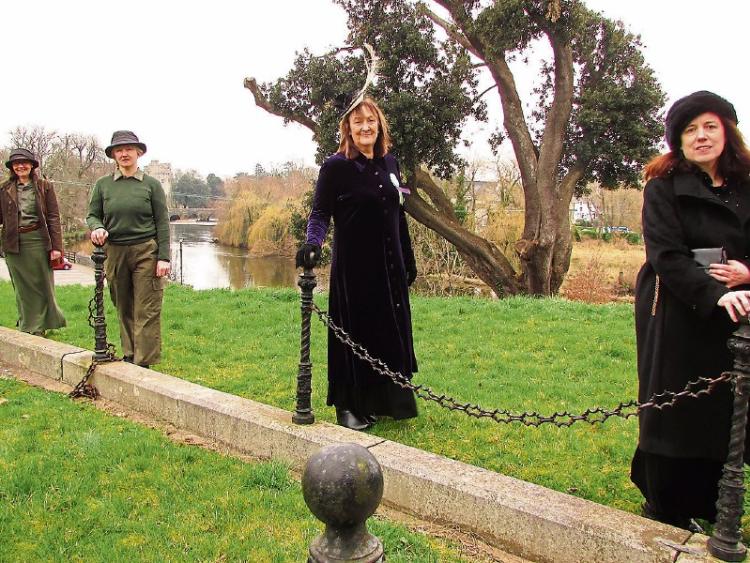 International Women’s Day was celebrated  in Cahir with the surprise erection of 24 plaques honouring local women that are now the focal points for a new walking tour of the town.

Under cover of darkness on  Sunday night, the Daughters of Dún Iascaigh, a small team of local women dressed in Cumann na mBan uniforms and other costumes of the Irish Revolution period, secretly erected the temporary plaques at key locations in Cahir to acknowledge the contribution women have made to the town and surrounding area over the centuries.

The plaques are now the focal points of a new walking tour of Cahir that local residents living within 5km of the town are being encouraged to do.

Daughters of Dún Iascaigh group member Josephine Casey was interviewed on the show about the project, which is supported by Tipperary County Council and Cahir Social & Historical Society.

Josephine told The Nationalist their efforts were designed to celebrate local women, surprise the people of the town, generate a sense of fun in the community and provide a new walking loop. “All very important in these Covid times,” she quipped.

The plaques feature the work of celebrated Cahir born artist, Alice Maher. They commemorate a diverse group of trailblazing women, ranging from county Tipperary’s first female councillor to a rebel nun, a socialist, a war time nurse, a suffragette, a war victim, a single mother, an actress and an artist.

Badamair, the first lady of Cahir; the women of the Famine; ordinary mothers, who struggled to bring up their children; the unwed, pregnant women sent to Mother and Baby Homes, and those who participated in the Land League, Cumann na mBan and the Anti-Conscription Movement are also remembered.

The project follows the success of the 2018 Tipperary Book of the Year, Daughters of Dún Iascaigh: A Light on the History of Cahir Women published to mark the centenary of the first election some women were allowed to vote in.

It has been funded as part of the Tipperary Commemorations Programme with funding from Tipperary County Council and the Department of Tourism, Culture, Arts, Gaeltacht, Sport and Media.

Cllr Marie Murphy erected the plaque to Marian Tobin, the first woman councillor in Tipperary and one of just 43 from across Ireland, who succeeded in being elected in 1920, just two years after women were granted the right to vote.

“To be truly representative, we need to encourage more women to follow in the steps of Marian Tobin and take public office at both local and national level.

“Ireland still has the 10th lowest representation of women in parliament in Europe and are under represented in the Dáil. I am honoured to represent the people of this community and commend the women behind this important initiative.”

Jo O’Neill of the Daughters of Dún Iascaigh,  said it was important to remember and celebrate the extraordinary women who shaped Cahir.

“For too long, they have been forgotten. We are now reclaiming and rewriting the history of our town, plaque by plaque. The centuries may divide us but we have much in common. These women also knew pandemics, wars, love, pain and loss and yet they prevailed. This is an important message of hope during these current times.”

Fellow Daughters of Dún Iascaigh member Annette Condon, grandniece of Marian Tobin said the walking tour route will be prominently displayed in a number of key locations in the town for people living within the 5km limit.

She pointed out that people living outside the 5km limit as well as Cahir people living abroad can access the tour virtually via an online map, read more information about each plaque and in many cases, listen to audio.

“While the plaques are temporary, we hope the county council will consider erecting permanent memorials in due course. Apart from encouraging healthy exercise, we believe that post-Covid; this could provide a new attraction in the town for local people and tourists alike.”

Another member of the group, Mary Caulfield, said it has been a tough year and they wanted, through the project, to provide some cheer to the local community.  “We loved the idea that the people of the town would wake up to something new to see and talk about. We wore costumes to add a sense of fun to the occasion and also to remember the brave women of the past. We gratefully acknowledge the support of Tipperary County Council, Cllr Marie Murphy and Cahir Social and Historical Society.

“A very special word of thanks to the local gardaí, particularly Sgt Ray Moloney and Garda Jenny Gough, who were hugely supportive of this community initiative and who have asked that people continue to adhere to the 5km until such time as restrictions are eased.

“We were also fortunate to have the support of local historians.”

Olivia Lynch, who co-ordinated the socially distanced installation of the plaques, added:  “We want to acknowledge all the people, who  run businesses or live in the locations where the plaques have been erected.

“We are grateful for their co-operation in granting us permission and keeping our secret. Thanks also go to our installation crew and all who helped us with costumes and audio recordings. Everyone was thrilled to be involved.”

The Daughters of Dún Iascaigh remind the public not to congregate at the site of the maps and plaques and to follow physical social distancing and all other Covid-19 related precautions at all times.

You can view the online tour on https://tinyurl.com/