Cabragh Wetlands - Yellow is the “in” colour in nature 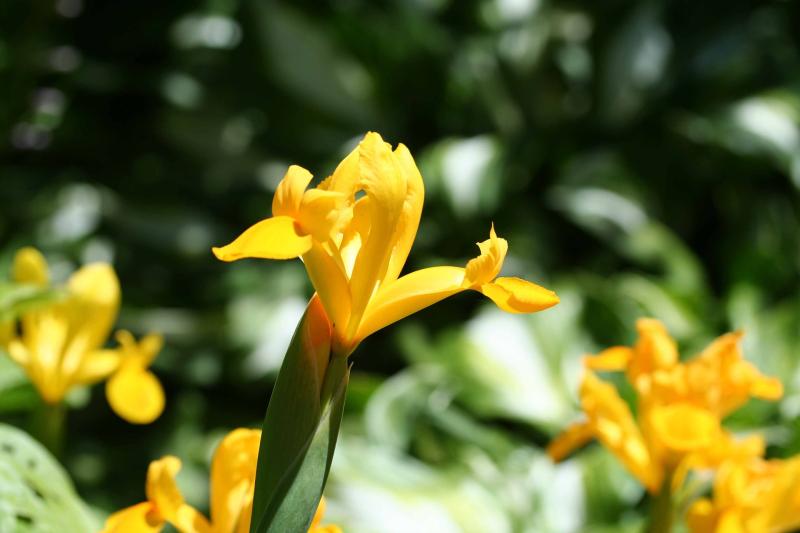 Yellow is certainly becoming the “in” colour in nature at the moment. Travelling to Kilkenny recently, the golden hillside above Minister’s Cross was a sight to behold. Furze dominated the hillside although one enterprising farmer had carved out a very fine hill farm from the predatory shrub. This plant is very difficult to eradicate even by burning and its explosive fruit technique is very difficult to counter. Strange to imagine now that it was once used as fodder and a number of placenames around Thurles such as the Furze or Bawnanaitinn reflect its popularity. Known in different localities as furze, gorse or whin, it is in bloom almost all year round. Furze has a warm smell and grows on acid sandy soils often in exposed windy situations. It is a very resilient plant with thick leaves that reduce the rate at which moisture is lost. The sharp foliage protects the nests of linnets and stonechats.

Yellow also predominates the wet meadow at this time of year although in this very late spring it is yet only the light green spear emerging from the mud. In Cabragh, yellow flag is one of the most widespread and attractive species. As long as the plant receives plenty of sun it produces numerous flowers but in shady places, all you will see are the stiff sword like leaves. It grows to a height of 1.5 metres and spreads by means of thick rhizomes to form large colonies. The flowers are pollinated by bumble bees. The bee lands on one of the three large petals and crawls right into the flower following dark brown lines that radiate from the nectar source. As it does so, the pollen grains collected from the other irises are rubbed onto the female stigma. Further down the tube as the bee drinks from the nectar, pollen is brushed onto its back. When the bee crawls out, the stigma curls up out of the way to avoid receiving its own pollen.

For me, the most beautiful tint of yellow in spring is that of the marsh marigold which appears in clusters attracting large numbers of insects. Made into garlands or placed on thresholds for protection against superstition around May Eve, Shakespeare refers to them as “Winking Marybuds begin to open their golden eyes”. They thrive on wet nutrient rich ground and especially near drains. They cannot cope with grazing and at the same time need plenty of water and are usually mixed with ragged robin, lesser spearwort and other colourful inhabitants of the marsh.

Wet meadows played a very important part in early Irish farming as reflected in the place name “buaile”. Very often the buaile, the place where the women and girls took the herds of cattle for summer grazing, was on the hillsides but placenames round Thurles like Bouladuff and Galboola indicate that transhumance was practised in low lying floodplains and wet meadows. The nutrient laden silt deposited by the winter floods provides a natural fertilizer. The irrigation skills that made Cabragh Wetlands an ideal place for seasonal grazing are now lost although here and there the traces of the old irrigation channels, ridges and furrows may still be seen. Water flowing from Killough Hill was constant in temperature and so stimulated the growth of grass. Today widespread drainage has led to the demise of many water loving species and Cabragh Wetlands is one of the few places where plants may be seen. The interface between water and plants is shallowly sloping, constantly wet and ideal for marshland plants with different sections of the wetland dominated by different plants.

These weeks too see the emergence of Our Lady’s Smock named like Marsh Marigold in the religious fervour of the middle ages. A delicate purple pink flower, it grows in a range of habitats and has a widespread distribution. What makes it most interesting is that it is the host of the orange tip butterfly, although only the male possesses the orange tip. The egg stage lasts about seven days and on hatching, the larva eats the the egg shell or other recently emerged larvae! The eggs are deposited singly, most often one on each plant and egg laying females generally avoid a plant on which an egg has already been laid. It is one of the first butterflies to look out for in spring but numbers decline rapidly as June progresses. Now scarce on intense farmland, there is no shortage in Cabragh.

As decision time for summer activities draws close, might we suggest “Detective in the Wild”, the Cabragh Wetlands summer camp for primary school children running from July 16th-20th from 9am to 2pm each day. Brochures available from libraries, schools, Cabragh Wetlands Centre, etc. or by phoning 0504 43879.
Slán go fóill.