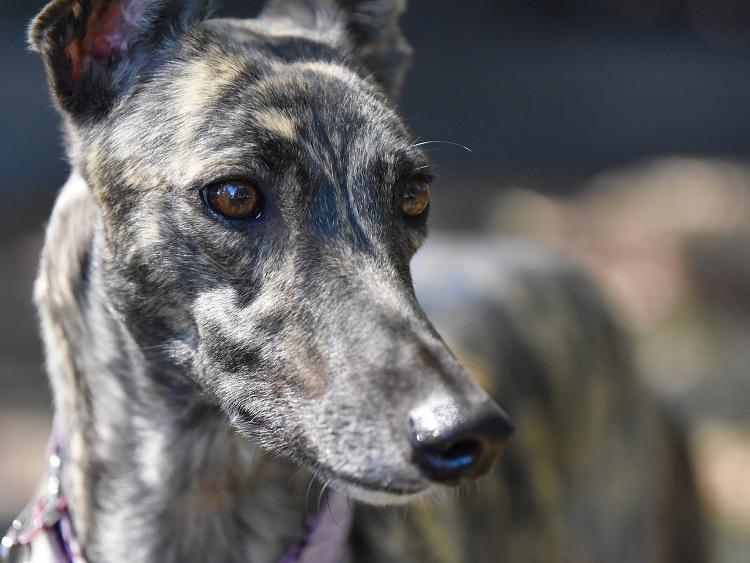 Following a wonderful passage to the 2020 Kasko Unraced 525 Yard Stake Final, John & David O'Herlihy’s unbeaten Knockboy Flight (Skywalker Puma-Knockboy Kathy) completed his stunning career start at Thurles Greyhound Stadium with another brave performance to land the prestigious prize in a thrilling Saturday showdown.
Renewing rivalry with Pierno following their brilliant semi buckle, it was that Thomas O’Donovan speedster who again set the early pace when swift to stride from trap 2. It was the inside traps who dominated on the run to the corner and from his rails pitch, the Kevin McClean trained Knockboy Flight never afforded Pierno sufficient leeway to turn independently and crucially reached the bend within a half-length of the leader.
That same margin separated the pair to the top of the backstraight as Chasing Turkey gave keen pursuit at a two-length deficit while occupying third. Still with command of the rails position to halfway, the most significant move of the final came on the approach to the third turn as Knockboy Flight drew alongside Pierno.
Benefit of the inside duly saw the champion elect edge to his three-quarter length winning margin approaching the home straight before ably repelling a most gallant runner-up on the run to the line in a brilliant 28.93 (-40), with Chasing Turkey three lengths back in third.
Another fantastic duel between two exceptional pups, Pierno loses little in defeat here and only enhances his profile yet further as a hugely exciting prospect within a brilliant renewal of the Kasko.
To the winner the spoils however, and Knockboy Flight displayed everything that trainer Kevin McClean could have wished to see in his career start. He will be obliged to tackle exalted company as he exits the Kasko but the December 2018 whelp is a pup with a big future on the evidence of his Thurles performances. Pace at all points of the circuit, brave battling qualities when put to the test and most importantly, a real stamp of class. A most deserving winner, Knockboy Flight will carry the Kasko crown with distinction!

Blue icing on McClean cake
Topping off the McClean kennel celebrations when sparking a high-class double on the Saturday card was The Greyhound Bar Clonmel Syndicate’s Thunder Blue (Droopys Sydney-Eleanors Moment) when fastest of the remainder over 525 yards in his A0 contest.
Back to his best breaking form, the March 2018 whelp dictated the early pace from trap 5 and swept the opening bend with a length in hand over Faithful Rory. An impressive negotiation of the second turn saw the strong runner extend his advantage when three to the good by halfway. Faithful Rory would normally prove a big threat in such scenarios but himself a strong runner at the standard distance, Thunder Blue impressively contained the Richardson charge when staying stoutly to the line in 29.04 (-40) with four lengths to spare in his fifth career win.

Redemption for Warrior
Denise Ryan’s Oriental Warrior (Superior Product-Laughil Lucy) would much prefer to have scored victory on Kasko final night of 2018 than on Saturday last, for a finalist in the main event then, a luckless outing left him side-lined for an extended period. Returning from a second twelve-month absence to score victory in August, there was something of a fateful overture when he claimed the A2 525 contest on the Kasko undercard this year.
Missing his break last time out, the Ryan veteran remedied that when swift to stride from trap 5 and turning with daylight to spare, settled the race as a contest when streaking clear to the backstraight. Pursued by Cooladerry Jazz to halfway, it was Star Blake who eventually filled second when impressively staying stoutly after early crowding, but Oriental Warrior was never seriously threatened in his four-length victory while posting a slick 29.26 (-40).
There were many smart performances over 525 yards on Saturday and concluding proceedings with a career best in the A3 contest was Sue O’Neill’s San Deni (Head Bound-Heavens Lilly) as the sharp early pacer dominated throughout a facile second career win.
Going close at 330 last time, he put that early pace to good use when securing a one length first bend lead and settled the race when stretching clear to the backstraight. Well in command when pursued by Skirk Grace to halfway, San Deni saw out the trip well for a seven and a half length verdict in 29.22 (-40).
Held in her first race outing following an attractive qualification at Thurles, the preceding A3 event revealed a smart prospect in the shape of Liam McGrath’s Rackethall Zoe (Tyrur Big Mike-Leamaneigh Breda) who left her bumpy debut well behind in a sharp maiden win.
Level away from trap 3, the January 2019 pup displayed impressive early dash and took a two-length lead to the corner before nudging further clear to halfway. In command to the closing bends, she was forced to repel the strong late attentions of Cabra Beauty in the home straight but was a most deserved one length winner in 29.33 (-40).
There was just a sole novice contest on the night but the ON3 525 returned a hugely impressive winner and Liam Egan’s Ferryforth (Rockybay Foley-Lemon Jane) looks a runner to follow having scored an eight-length victory despite being led to well beyond halfway.
It was Tetra Amy who set the early pace as the Egan pup duelled for second position with Taylor Kate to the backstraight. Reducing a two-length deficit, Ferryforth struck the front nearing the third bend and settling the race at the closing bends, powered to the line in strong running fashion thereafter. A January 2019 whelp, he left a very pleasing impression when posting 29.47 (-40) over Taylor Kate.
Opening the action, Liam Peacock’s Bogger Charlie (Skywalker Farloe-Alien Gem) backed-up his Kilkenny debut victory when ably coping with A6 on his graded bow. Breaking well from trap 4, the strapping 84 lb May pup paced up well and turning on the outside of a tightly packed field, streaked clear to the backstraight. Chased to halfway by Cagey Maggie, Bogger Charlie would cede some late ground to that rival but was full value for a two-length verdict in 29.67 (-40).
Also extending a pleasing career start in the night’s S4 330-yard event was Karen Murphy’s Wing Mirror (Droopys Jet-Mt Heaton Daisy) when reverting to sprinting after his early paced victory over 525 last time.
A second win from three starts looked unlikely however when the September 2018 youngster made a tardy start before surrounded by rivals when two lengths off the lead in the early exchanges. Recovering ground when in full stride, he bravely secured the rails position when joining Outside The Ring at the bend and Wing Mirror settled the contest while streaking clear to a three and a half length verdict over the running-on Outcast Dreamer in 18.22 (-10).
The remaining A5 525 contest saw Cathy Slattery’s Shevry Cross (Droopys Jet-Flomur Jodi) shed his maiden tag at the fourth attempt when just about leading throughout in 30.02 (-40). A narrow first bend lead became four lengths at the top of the backstraight, but the March 2019 pup was made to pull out all the stops close home when repelling Bob The Lad for a game half-length verdict