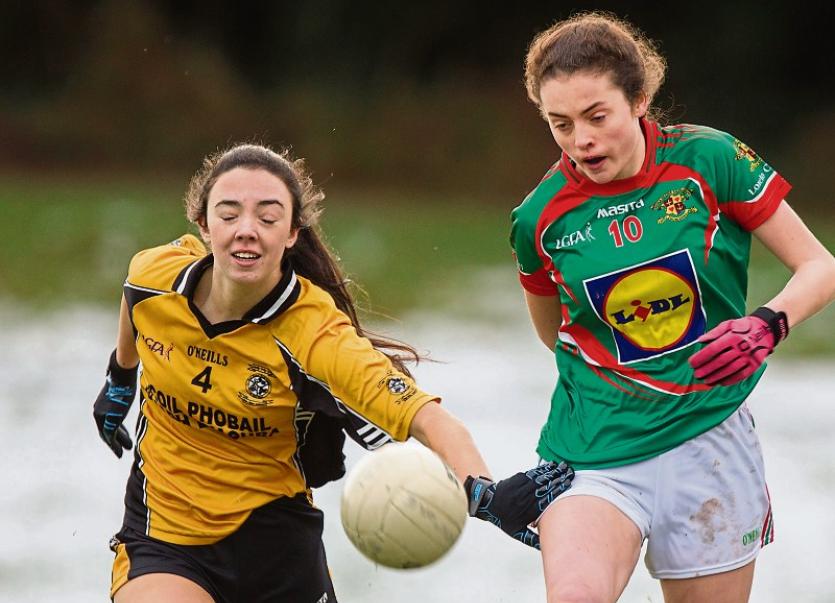 Loreto's Aine Fitzgerald gets in her clearance under pressure from Scoil Phobail's Brid O'Connor.

It was a case of third time lucky for Loreto Clonmel as they overcame Scoil Phobal Rathmore, 1-12 to 2-4, in a brilliant game of Ladies Football in Ballygiblin on Saturday afternoon.

Having been beaten in the previous two finals, Loreto were in no mood to return home without the cup on this occasion and they can be extremely proud of their great win, especially the great character they showed throughout the game.

Indeed the game was in doubt right up to the throw in.

Snow and ice had covered part of the pitch and thanks to the great efforts of volunteers from both sets of supporters who helped clear the snow and ice to make the pitch playable so the game could go ahead.

The heavy ground was energy sapping for both sides but they are to be commended for the great game they served up. 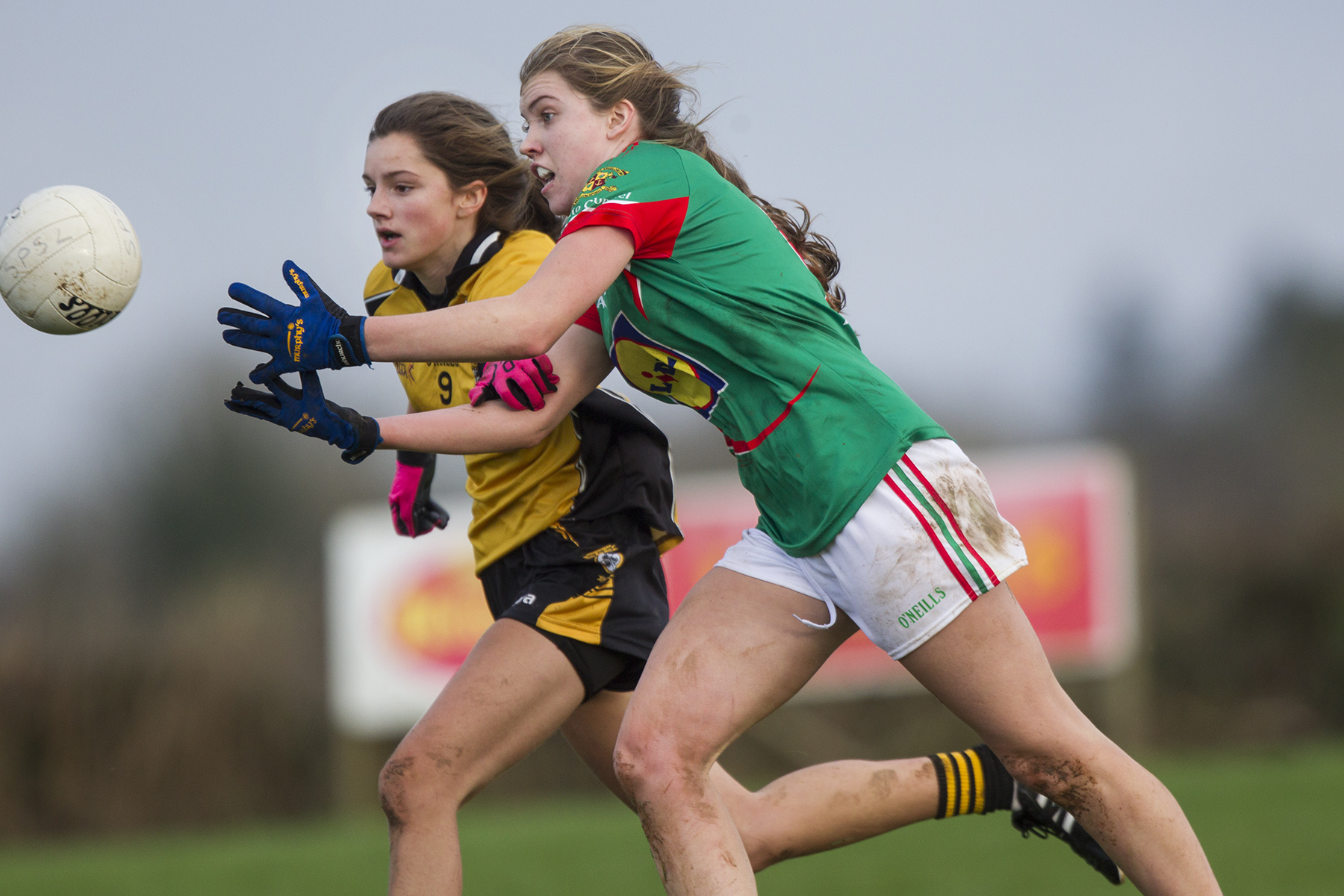 Loreto's Cora Maher gets her pass away under pressure from Scoil Phobail's Katie Buckley.

Loreto got a great start when a rebounded crossbar shot was kicked to the net by Ava Fennessy.

Rathmore were getting plenty of possession but the tenacious Loreto backline did not concede any scores.

Loreto were creating very good scoring chances but a number of spurned goal chances and wides gave an uncomfortable feeling to the Clonmel support that this could be one of those days.

On twenty minutes Rathmore were awarded a penalty which they converted. This was their opening score and they built momentum from this to narrow the gap to two points.

Loreto then steadied themselves with further points and went to the break leading by 1-8 to 1-2.

The second half started at the same fast pace where we left off.

Again Loreto had some good scoring chances which were fluffed. 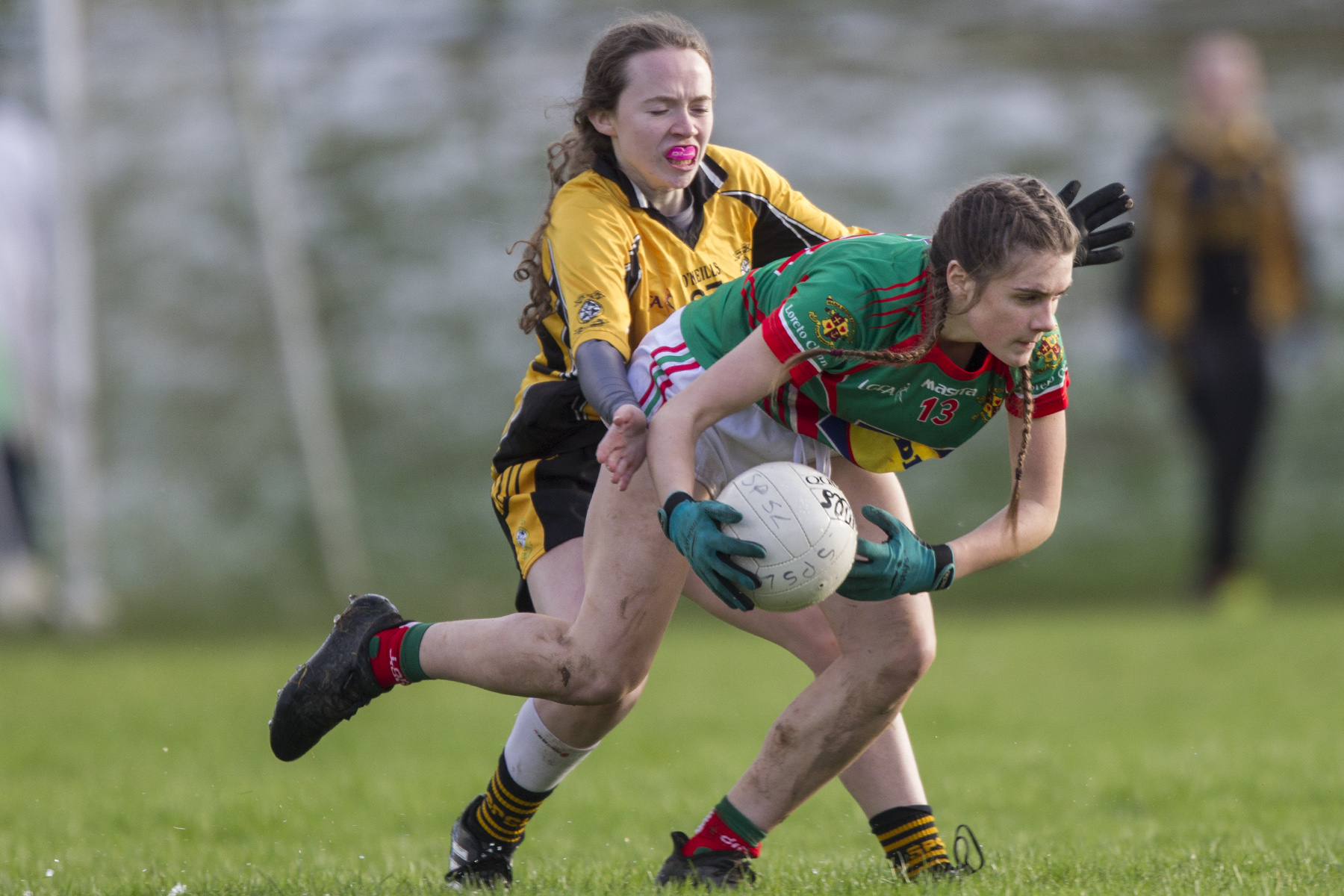 Rathmore then had a very good ten minute spell but the Loreto backs played very well and denied certain scores. Rathmore scored a very good goal to bring them right back into the game and two points was the margin once again. Loreto dug deep and finished well with further points to secure a famous victory.

Captain Aisling Deely accepted the cup on behalf of her team and thanked the management team of Niamh Barry and Brian White and all who supported and helped along the way.

This was a very good game of football with some great passages of play and full commitment by both sides.

Loreto were well served by Claire Moore in goal.

The six backs were outstanding and were well marshalled by Maeve Ryan at full back and Player of the Game Kelly Ann Hogan at centre back.

They played from the front and consistently denied Rathmore certain scores with great block downs and tenacious tackling.

Centerfield pairing of Cora Maher and Brigita Valuaintaite ran themselves to a standstill and relieved may dangerous situations especially in the second half when the need was greatest and the pressure was on from Rathmore as they tried with all their might to break down the Loreto resistance.

Up front the forwards made and got the scores to win the game.

They played very well as a unit and while Loreto had plenty of near misses and some wrong options taken at times, there was no denying their fierce commitment and hunger for victory.

However the scores were well taken and the chances and frees were the result of hard work and great efforts.

Loreto were clearly the better team and played really good football. However they could never pull away comfortably from Rathmore and had to fight all the way to hold onto their lead.