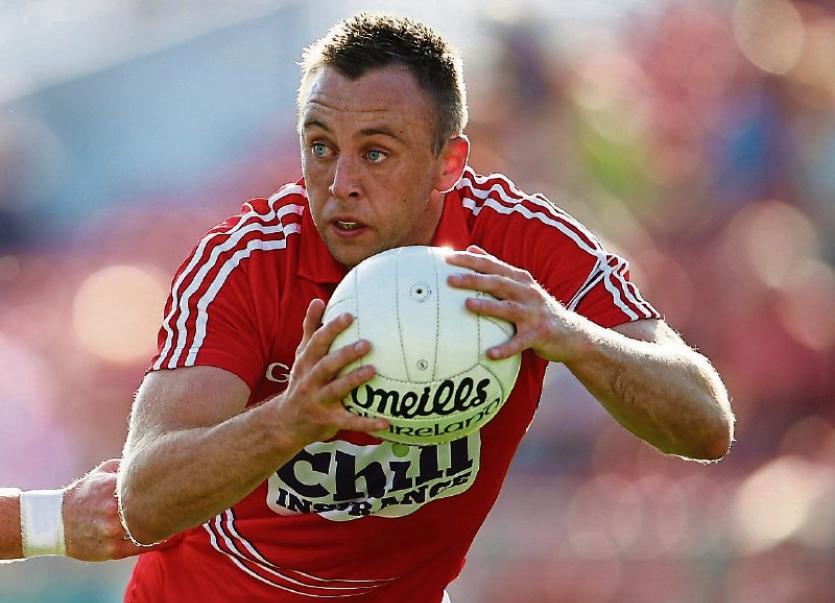 Experience Cork forward Paul Kerrigan will be a danger man on Saturday against Tipperary.

‘Forewarned is forearmed’ might just about sum  it up for Cork footballers as they prepare to face Tipperary at Páirc Uí Rinn on this coming Saturday evening in the Munster Senior Football Champiosnhip semi-final.

For any Tipperary football team facing   Cork  in the  Championship is  a daunting task but this year, like never before, ‘The Rebels’  will come totally focused on the job in hand.

Of course, there is the still-raw memory, if you are a Leesider, of last year’s Munster semi-final in Semple Stadium when a Cork team surrendered a 72-year record of not having lost to Tipperary in the senior championship. And as if that in itself wasn’t enough to focus the minds of Peadar Healy’s side for the visit of Tipp, Cork’s first round game against Waterford will for sure.

In Fraher Field in Dungarvan last Saturday night week Cork just about fell over the line against their opponents. A late rally saw them edge out Waterford by a single point thus preserving an unbeaten championship record against The Deise stretching all the way back to 1960.

It was perhaps the one result that Tipperary manager Liam Kearns could have done without. If Cork ever needed extra motivation - and they don’t after last year - any iota of complacency or of taking Tipp as just another stepping stone on their way to the almost annual Munster final with Kerry completely dissipated that evening.

Waterford, who hadn’t won a game since they beat Wicklow in a Division 4 game in February, led with under ten minutes to play.

However, Cork veteran Paul Kerrigan kicked a huge point to level and substitute Donncha O’Connor,  edged the Rebels back in front. Another sub Alan O’Connor was shown a straight red card late on (which rules him out for Saturday) and the sides were still level in the fourth minute of injury-time before Colm O’Neill kicked a  free and Kerrigan landed another fine point.

A nail-biting finish saw Waterford cut the gap to the minimum but there was no time for an equaliser as Cork escaped from jail in what would have been the shock of the year had it happened.

Even allowing for the fact that Cork football isn’t at its usual high pitch at present, no one would have envisaged Waterford being within a mile of them at the final whistle in the first round of the Munster championship

Cork’s  Division 2 National Football League form this year was mixed. In their seven game campaign they  won twice (Fermanagh and Derry), drew three  (Galway, Meath and Down) and lost  to Kildare and Clare. But considering they were taking on minnows Waterford, whose only wins in 2017 were against fellow Division 4 sides London and Wicklow, it was a  very disappointing display for the 2010 All-Ireland winners.

However, credit also to Waterford, managed by former Tipp boss Tom McGlinchey, whose team were very well structured and well drilled for the game.

At times Waterford parked 15 men behind the ball and made it ultra difficult for Cork attacks to penetrate and for Cork’s very capable forwards to score. The game plan Waterford brought with them was defensive but understandable. It necessitated the vastly experienced and top class forwards Colm O’Neill and Paul Kerrigan to ultimately break them down.

The likes of older players Donncha O’Connor, Alan O’Connor, James Loughrey, Mark Collins, Paul Kerrigan needed to draw on all their experience against Waterford for Cork to eke out that  win.

Cork  will have learned from the Waterford game and will also be anxious to avenge last year’s shock against Tipperary at the same stage. Forewarned and forearmed with home advantage they will be expected to prevail.