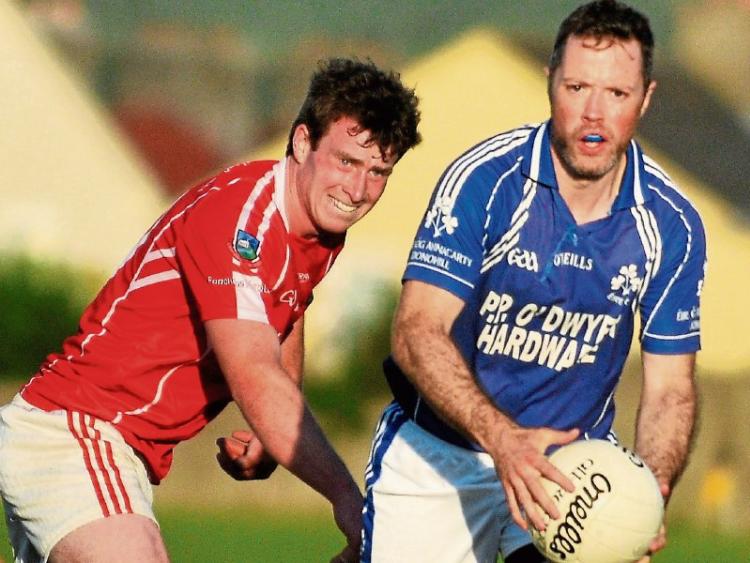 Éire Óg Annacarty secured their place in the knock-out stages of the Tipperary Water County Senior Football Championship on Sunday evening at Seán Treacy Park in Tipperary town when Liam O’Dwyer’s side earned a six-point win over Galtee Rovers, 0-14 to 0-8.

Éire Óg led 0-6 to 0-5 at the break against a determined Galtee Rovers side, but the Annacarty men played the more composed football in the second half and out-scored their opponents by an impressive 0-8 to 0-3.

Brian Fox looked a class act and was a most obvious candidate for the man of the match award, but the overall performance of the Éire Óg Annacarty team would suggest that defending champions Loughmore-Castleiney need to be on their guard when the sides meet in their re-played first round fixture with a place in the quarter-finals up for grabs.

This Éire Óg team appear to have something about them and in the 35th minute Ronan O’Brien punched over an eye-catching score - Annacarty turned over an attacker at the opposite end of the field and moved the ball smartly forward before corner-back O’Brien applied the finish having made a lung-busting supporting run; better still there was midfielder Tom Fox covering for his teammate at the back.

Paul Downey opened the scoring for Éire Óg before Tony Egan responded with a brace (one free) to present Galtee Rovers with a 0-2 to 0-1 advantage in the 11th minute.

Annacarty brought a period, which featured some wild shots at goal, to a close in the 18th minute when Paul Downey added his second before Brian Fox fired Éire Óg into a 0-3 to 0-2 lead in the 21st.

Galtee Rovers hit back with a Shane Egan free, but Éire Óg were moving well now and added scores through Seánie Ryan and Kevin Fox to scoot two clear (0-5 to 0-3). Strangely, Fox’s long-range shot was allowed to bounce over the bar.

A superb Shane Egan effort cut the deficit faced by Galtee Rovers to one before Kevin Fox (free) scored his side’s sixth point of the half. Then, two minutes into first half injury time, a Shane Egan free left one between them at the break (0-6 to 0-5).

Galtee Rovers threatened a goal in the third minute of the second half which could have altered the trajectory of this contest, but Éire Óg ‘keeper Patrick Aherne bravely saved Dara Egan’s blistering effort.

Points from Ronan O’Brien and Brian Fox left three between them (0-8 to 0-5) with thirty-seven minutes played before Shane Egan opened Galtee Rovers’ second half account in the 38th minute.

Some of the Annacarty shooting left a little bit to be desired (eleven wides and six efforts dropped short), but Éire Óg stretched their lead to five thanks to points from Paul Downey (free), Seánie Ryan and Kevin Fox before a Tony Egan free in the 48th minute left four between them (0-11 to 0-7).

A Paul Downey effort opened a five-point gap before Galtee Rovers conjured another goal-scoring opportunity in the 53rd minute - Tony Egan played in Colin Morrissey, but the full-forward was denied by a superb tackle from Éire Óg’s Conor O’Brien.

Shane Power brought the scoring to a conclusion from a Galtee Rovers point of view in the 55th minute while Éire Óg closed out this contest with efforts from Paul Downey (free) and Tom Fox - Fox’s effort was deflected over by Callum Fanning.