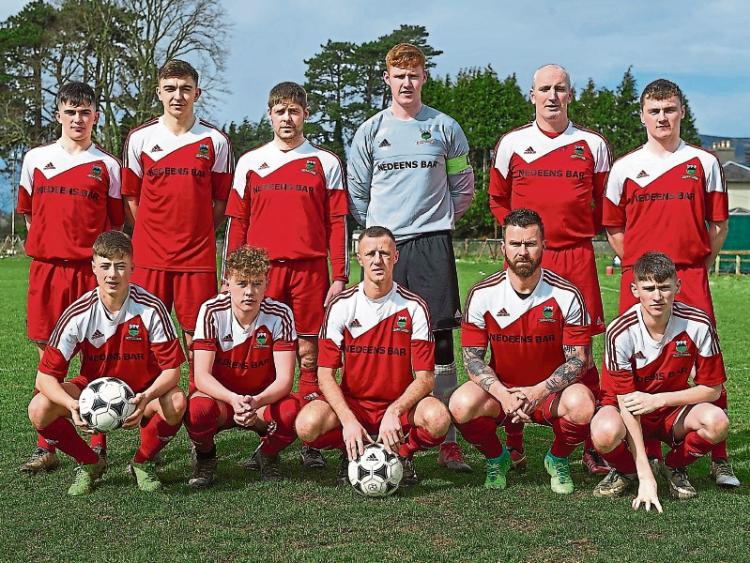 Such is the nature of the closeness of the Division 1 table that Vee Rovers went into the game knowing that they could finish it either in the promotion places to the Premier League, or getting pulled back into a battle for relegation back to Division 2.

By the end of the 90 minutes however, it was the visitors who are now tethering on the brink of a second relegation year in a row, while the home side close in on potentially a title winning season, as the Rovers had an emphatic victory against a foundering Cashel Town side.

Like almost every game in this division, this tie was an uncompromising battle with neither side asking or giving an inch.

The home side had the benefit of a gusting wind in the first half and controlled the most of the play, but were unable to make any of this count in the first 45 minutes.

Cashel then looked to make advantage from the elements in the second period, but as the game ground on they too fell to a kind of trench warfare that looked like producing nothing of note.

Sixteen minutes from time however, the home side finally managed to turn the screw and opened the scoring when Dave Hyland found the net after some good work by his midfield partners.

Cashel visibly wilted after going a goal down and six minutes later Tomás Vaughan scored a second for Rovers as they played with an assured confidence in knowing that the points were theirs.

And they applied a coup de grace four minutes from the end when Shane McGrath got a third to completely demoralise the opposition and send his side closer to the Premier League.

St Michael’s second turned the form book on its head last Sunday morning at a very wet and windy Nijinsky Park, as they routed an under strength Rosegreen side who had been hoping to put a stranglehold on one of the promotion spots at the top of the First Division.

It was obvious right from the very start that this was going to be a different Saints team to the one that capitulated to the same opposition four weeks ago, and the young side popped the ball around their more experienced opponents with ease.

They also took advantage of an almost gale force wind behind them and opened the scoring after only five minutes with a goal from Brian O’Dea. This settled the visitors and they continued to press, getting a second goal in the 15th minute, this time through an excellent shot from distance by Alan O’Donnell.

The same player made it three at the break, this time when he was on hand to finish off a scramble in the area, five minutes before half time.

The table toppers came out with intent in the second half and knew that they would need to get something early on if they were to get back into the game. This looked like happening when Dara Browne got the goal of the game, stepping back three Michael’s player before unleashing a rasping shot from all of 25 yards out to the net.

But they couldn’t build on this, as within minutes the Saints had re-established their three goal lead when Rodrigo Goncalves scored from close in.

Another scrambled effort 20 minutes from the end made it five for the Saints who needed this win give themselves some hope of salvation in the division, but this will also put a serious dent in the home side’s hopes of going up to the Premier League as champions.