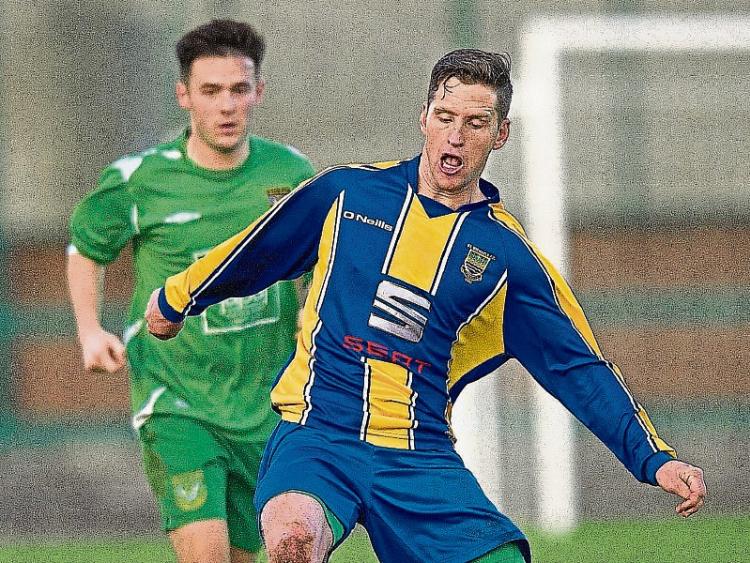 Tipperary Town side St. Michael’s maintained their 100% record in the Premier League and stayed on course to regain that title with a narrow but well deserved victory over Clonmel Celtic at Cooke Park on Wednesday night last.

After some good early first half pressure St. Michael’s eventually took the lead. A good one-two movement between Jimmy Carr and Rodrigo Goncalves saw Carr cross eventually for Colin Bargary to score with a far post header. Both sides had their chances before half-time but there was no further scoring before the break.

The second half was for the most past a case of Celtic sitting deep and defending in numbers as Saints beat a path towards their goal. However, like in recent cup games the Tipperary boys were unable to turn that dominance into scores on the board.

Fortunately for the visitors, unlike those games Clonmel Celtic hadn’t the firepower to punish the Saints who were glad of three more vital points as they creep back towards the summit of the TSDL.

As things stand right now, St Michael’s are in third position, unbeaten, with 27 points from nine games. They are just five points behind leaders Peake Villa (32 points from 15 games) but have a half dozen games in hand to make up those five points.

Bansha Celtic are currently in second place on the league table with 29 points from 13 games. They will be hoping to at least grab the runners-up spot which would be a tremendous achievement for them in this their first year back in the top flight.

TOP OF THE PREMIER LEAGUE