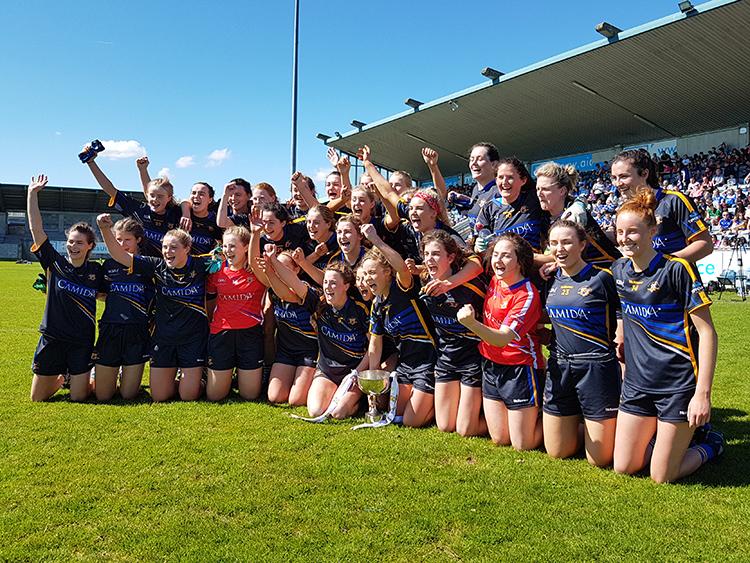 Tipperary were crowned Lidl National Ladies Football League Division Two champions on a blisteringly hot day at Parnell Park, Dublin on Sunday, but only after a decider which was absolutely packed full of excruciating drama.

The Tipperary team overcame a massive Cavan challenge and the concession of a controversial goal in the opening half to place league titles back-to-back. The Premier County led 0-7 to 0-4 when Aisling Sheridan scooted in for the controversial three-pointer; that strike helped the Ulster side into a strong interval position and when Róisín O’Keeffe buried another goal in the opening minute of the second half Shane Ronayne’s side trailed by three.

Tipperary, however, responded brilliantly to the challenge posed and proceeded to dominate the second half. Indeed, Tipp took a five-point lead, but following a careless period the Premier County allowed Cavan to battle their way back into this one. Tipperary seized the initiative once more, but were almost denied at the death when referee Stephen McNulty appeared to award Cavan a penalty, but then changed his mind.

Aishling Moloney was the stand-out candidate for the player of the match award following this final with five points from play while Anna Rose Kennedy, Bríd Condon, Jennifer Grant and Mairéad Morrissey were also terrific.

Please note too that Orla O’Dwyer captained Tipperary to an eleven-point (1-24 to 1-13) victory over Limerick in a Munster senior Camogie semi-final on Saturday before also making a towering contribution to Sunday’s league final success.

Shane Ronayne’s outstanding team will now turn their attention to the up-coming Munster senior championship semi-final clash with Cork on June 2nd - Waterford take on Kerry on the opposite side of the draw with a place in the provincial final up for grabs.

Following this latest victory you would have to wonder where the ceiling is for this Tipperary ladies football team - the outfit managed by Shane Ronayne have now won successive leagues titles (division three and division two), find themselves amongst the elite in division one and also thundered to last season’s All-Ireland intermediate championship title.

Two Aisling McCarthy points (one free), a Gillian O’Brien strike and another effort from Róisín Howard helped Tipperary into a 0-4 to no-score lead inside the opening eight minutes.

Róisín O’Keeffe opened the Cavan account in the ninth and although Aisling McCarthy set up Mairéad Morrissey for a point in reply Tipperary were more than thankful to an alert Lauren Fitzpatrick who did especially well to deflect a Bronagh Sheridan shot over the bar in the tenth minute.

Cavan were pushing right up on the Tipperary sweeper and thanks to some powerful running from the middle third the Ulster side added points, which arrived courtesy of Bronagh Sheridan (free) and Donna English, to close the gap to one (0-5 to 0-4) by the 13th minute.

Cavan, who were playing with a slight breeze, had amassed six wides (Tipperary two) by the 19th minute. The Premier County needed a score to settle them and conjured one when Aisling McCarthy picked out Aishling Moloney (now re-located to full-forward) and the Cahir star delivered off her right. McCarthy converted a free soon after and Tipperary led 0-7 to 0-4 with twenty-one minutes played.

This final reached a controversial juncture in the 24th minute: Orla O’Dwyer collided with her marker approaching the stand side of the field and the lineswoman flagged for a Tipperary ball. Bríd Condon advanced to take responsibility for the kick, but just as the Aherlow wing-back arrived the lineswoman changed her mind and flagged in Cavan’s direction; the sideline ball was taken swiftly and kicked into the arms of a delighted Aisling Sheridan who raced through to bury an equalising goal (0-7 to 1-4). Tipperary manager Shane Ronayne was beside himself with anger following the incident and it was hard to blame him.

Tipperary responded with an Aishling Moloney point to re-claim the lead in the 25th minute and although Bronagh Sheridan equalised further points from Aisling McCarthy (free) and Aishling Moloney (a brilliant long-range effort, her third from play) helped the Premier County into a 0-10 to 1-5 lead.

Cavan hit back with a brace of scores to tie the game thanks to efforts from Róisín O’Keeffe and Sinéad Greene (0-10 to 1-7) and Tipperary were especially thankful to Lauren Fitzpatrick in the 29th minute when the ‘keeper conjured a superb point blank save to deny the raiding Bronagh Sheridan.

There was little Lauren Fitzpatrick could do, however, during the opening seconds of the second half when Róisín O’Keeffe palmed home Ciara Finnegan’s clever cross (0-10 to 2-7).

As we have come to expect Tipperary responded superbly to the challenge posed. Indeed, between the 32nd and 45th minutes Tipp hit 0-6 without reply to take a 0-16 to 2-7 lead - Mairéad Morrissey, Aisling McCarthy (three, two frees), Aishling Moloney and Jennifer Grant were responsible for this series of rousing scores.

And, Tipperary appeared to have created a game-breaking goal-scoring opportunity in the 44th minute when some smart inter-play sent Orla O’Dwyer through on goal, but Cavan ‘keeper Evelyn Baugh pulled off a magnificent save.

With Cavan reduced to fourteen players you expected Tipperary to push on, but it was the Ulster side who thundered back into this contest with points from Bronagh Sheridan and Aisling Maguire (free) before Aisling Sheridan buried her second goal to tie the game in the 51st minute (0-18 to 3-9).

Aishling Moloney landed a cracking point to edge Tipperary back into the lead in the 53rd and just seconds later picked out Niamh Lonergan who steered over a beauty from the outside of her right boot - the Premier County now led by a significant two.

Bronagh Sheridan and Aisling McCarthy traded points before an Aisling Maguire free left a point in it with two minutes to play.

Then we were treated to some excruciating drama when Cavan mounted one final attack - Bronagh Sheridan tumbled in the goalmouth in the 60th minute and referee Stephen McNulty indicated that he intended to award a penalty to the Ulster side. McNulty, however, changed his mind once he had consulted with his umpires and elected to throw the ball up; Jennifer Grant won possession and Tipperary duly landed the division two league title.