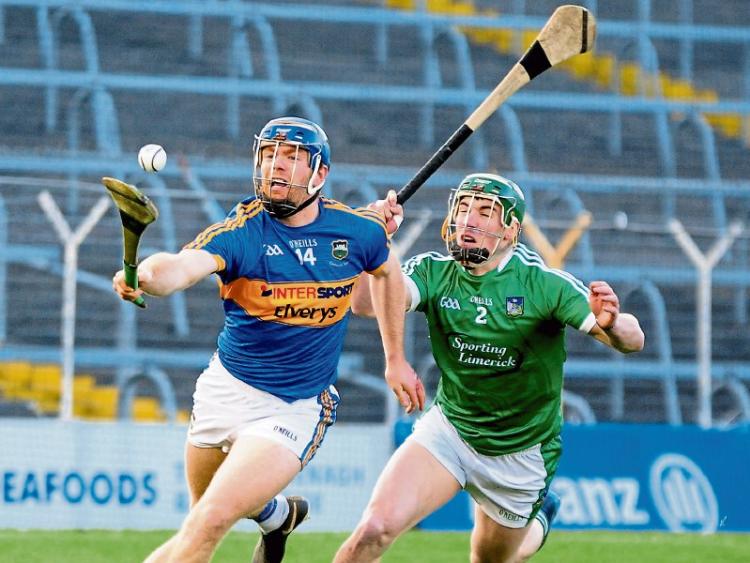 Tipperary's Jason Forde in action against Limerick's Sean Finn during the National League semi-final. The players will be in opposition again on Sunday in the first round of the Munster Championship.

A new Hurling Championship season in Munster is about to dawn and with it comes a new structure for those teams that will set out on their campaigns with the ultimate ambition of being crowned All-Ireland champions on August 19th, the new date for the final in a breakaway from the traditional first Sunday of September.

Teams in Munster and Leinster are competing in the newly-introduced provincial group stages, which will transform the ultra-competitive Munster Championship in particular into something that resembles a sporting snakepit.

After they have all played each other, the  two top teams will progress to the Munster Final on July 1st, the same date as the Leinster Final.

The provincial winners will advance to the All-Ireland semi-finals, with the beaten provincial finalists heading to the quarter-finals.

The third-placed team in Munster and Leinster will enter the preliminary quarter-finals, where they will have away games against the Joe McDonagh Cup finalists.

This all means that two teams from Tipperary, Limerick, Waterford, Cork and Clare will exit the championship on June 17th.

It's a precarious system in many respects and one that leaves little margin for error, something that Tipperary and Limerick will be acutely aware of when they begin their campaign at the Gaelic Grounds at 2pm this Sunday, May 20th.

Westmeath referee James McGrath will be in charge of a game that will be shown live on RTE.

On the same day Cork will entertain Clare at Pairc Ui Chaoimh at 4pm, which will also be shown live on RTE, with Kilkenny referee Sean Cleere the man in the middle.

After Sunday the games will be coming thick and fast.

As they prepare for this intensive schedule, Tipp will attempt to avoid the early season pitfalls of twelve months ago.

Then they opened their championship campaign against Cork on the back of a heavy defeat by Galway in the League Final, and slumped to a second successive defeat when The Rebels defeated them by four points in the quarter-final in Thurles.

They were much more competitive in this year's League Final but defeat was once again their lot when they were beaten by Kilkenny.

There was a sense of deflation around the county when Tipp lost that game in Nowlan Park.

As well as missing the opportunity to bridge a ten-year gap since the county's last success in the competition, the defeat extended Tipp's poor run against The Cats, who have re-emerged as All-Ireland contenders, having lost their opening two league games, and being pushed all the way before they saw off Dublin last Sunday.

While it would have been a welcome boost ahead of the championship, winning the National League is never the be-all and end-all of any team's season.

Tipp travelled to Nowlan Park as favourites to win that final but their lineout still bore an experimental appearance, including newcomers Billy McCarthy and Willie Connors.

While they'll hopefully enjoy successful careers in the blue and gold in the years to come, is either player likely to start a crunch championship game in the next few months?

Even more telling could have been the National League third round tie at Nowlan Park at the end of February.

In a close game in which his side were eventually pipped by a point, Tipp manager Michael Ryan resisted the temptation to summon captain Padraic Maher and Noel McGrath from the bench, despite being without the services of Jason Forde and John McGrath, who were on Fitzgibbon Cup duty the previous day; as well as being deprived a host of injured players including Seamus Callanan, 'Bubbles' O'Dwyer, Dan McCormack, Michael Cahill, Joe O'Dwyer and Cathal Barrett. "We've got to learn, and we've got to let our guys experience what it's like to come to top opposition like Kilkenny on their home patch and experience it", the Tipp boss said afterwards. “That's what hurling is all about".

Tipp will be hoping that the recovery of their injured players will coincide with the busy schedule that now faces them.

Seamus Callanan, the most high-profile of the walking wounded, underwent a back operation in January and wasn't seen during the league but returned to competitive club action recently when he played the whole game for Drom/Inch in their county championship clash against Loughmore/Castleiney.

'Bubbles' O'Dwyer looked rusty on his appearances in the latter stages of the National League, but his outstanding display for Killenaule in the South Championship semi-final against St. Mary's suggested a return to form.

Michael Cahill suffered a hamstring injury in Thurles Sarsfields' game against Upperchurch at a stage when he was re-establishing himself in the starting fifteen.

Even if Callanan and Cahill are unavailable there are plenty of options at Michael Ryan's disposal.

This spring Jason Forde has reaped the rewards of an extended run in the starting fifteen and has thrived in the extra responsibility thrust upon him as a consequence of Seamus Callanan's injury-enforced absence.

Assuming the mantle of freetaker has also boosted his confidence and swelled his personal scoring tally. He emerged from the spring as the best player of the National League, as voted by his intercounty peers, and with a haul of 7-72 from seven games.

Kildangan's Alan Flynn has also been  a real find during the league and seems sure to hold onto his place at corner-back, while Daragh Mooney appears to have secured the number one jersey.

However choosing the starting fifteen will be no easy task.

After the experimentation witnessed during the league, can anyone predict with certainty the positions that Cathal Barrett, Michael Breen (pictured above, right), Ronan Maher, Noel McGrath, 'Bonner' Maher and even captain Padraic Maher will occupy?

James Barry's suitability for full back has also come under scrutiny but the Upperchurch player has never let the side down when it mattered.

Michael Ryan and company have some hard decisions to make and it will be important to get the balance of the side just right, while the selection of those players who'll be sprung from the bench will also be crucial.

A win on Sunday won't be too easily achieved against an improving Limerick side that pushed Tipp all the way in the league semi-final, before eventually losing out in extra time.

Whichever team loses will be under pressure immediately, and that's a scenario that both will be desperate to avoid.

Tipp's hurling ability is as good as any team in the country.

However they'll need to back all the talent up with the necessary passion, spirit, intensity and desire if they're to go all the way this year in this changed hurling landscape.