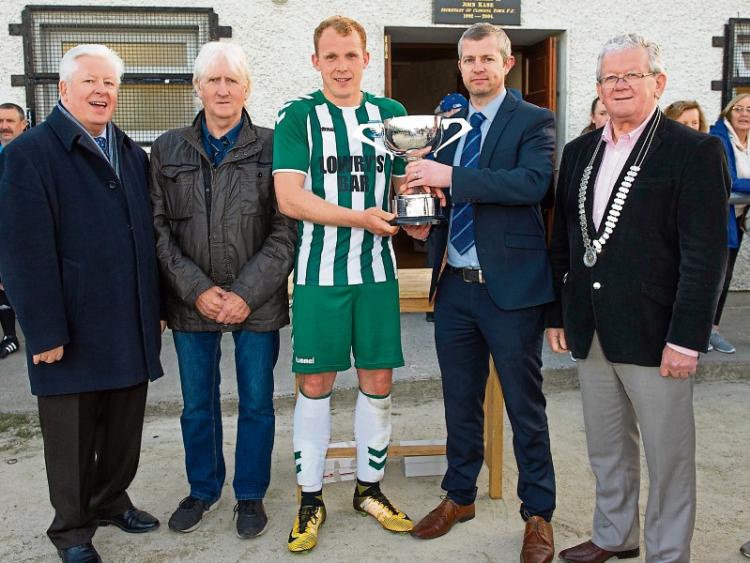 As the two teams met for a second time in two weeks, it was the current Cup champions St Michael’s that went through the gears in the second half  to retain their title and complete back to back doubles in the TSDL.

The tie itself was played on a beautiful summer’s evening, on an immaculate pitch in front of a large crowd, with supporters of many of the clubs across the league turning up to watch what had the promises of a great cup final. A stiff breeze blowing away from the Town end was the only thing stopping this from being the perfect evening for football.

That said, the holders took control of the game from early on, and had the majority of the possession of the ball. For all that though, the first half was tense affair with the ball spending too much time in the air for it to be regarded as a classic game between two good teams.

The best chance of the half came right on the stroke of half-time when Joey Mulcahy’s header from a David Slattery cross was brilliantly saved by the young Town keeper Eoin Power and went over for a corner.

Perhaps the seminal moment of the game came right before the start of the second period when substitute Sean Guerins came in for David Slattery. Within a minute and with almost his first touch, the returning Guerins put Saints ahead with an absolute bullet of a shot on the half volley from all of 30 yards out.

Three minutes later Keith Cashman fired wide  when well placed in front of goal, and there was a feeling around the ground that Town needed to get back into the game quickly if they were going to claw back a very strong St. Michael’s side.

This proved to be true two minutes after the hour mark when a rampaging Joey Mulcahy was upended after a good run and he dusted himself down to slam home from 12 yards at the resultant spot kick.

The Saints were in cruise control now and attacked constantly without ever having to hit top gear. They had a goal disallowed for an offside infringement before wrapping the game up three minutes from time when substitute Danny O’Brien was left unmarked at the far post and easily slotted Shane Ryan’s in-swinging free kick to make it 3-0.

Overall Town played too many long balls against the highly experienced St. Michel’s back four, and their best attacking ploy was often Conor O’Sullivan’s long throws.

Clonmel’s net custodian Eoin Power received the Man of the match award which was some indication of the pressure he faced consistently from the Tipperary towns attack.

In the end, form held and St Michael’s look once again to be on a different plane to the rest in the TSDL, who will have to make a big step up if they are going to challenge the champions anytime in the near future.