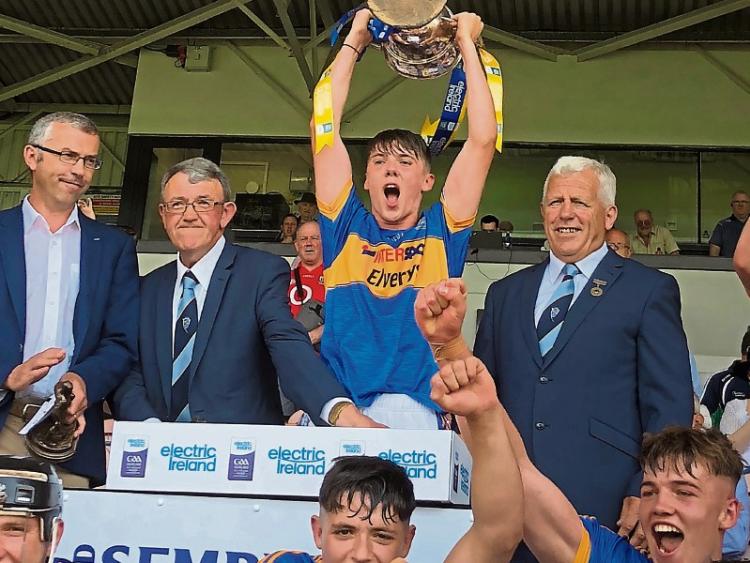 Tipperary minor hurlers produced their best display of the year to date at Semple Stadium on Sunday to capture the county’s 40th provincial crown at this grade.

Just six weeks on from a Round 1 defeat to Limerick at the Gaelic Grounds, this time round the Tipp minors comprehensively turned the tables on the Shannonsiders winning comfortably in the end.

It took Tommy Dunne’s charges a few minutes to find their feet on a glorious summer’s day before hitting the lead in the eighth minute, but thereafter they led all the way leaving no doubt in anyone’s minds that they were deserving provincial winners.

Following a topsy-turvy four-game campaign of two wins and two losses, Tipperary clearly learned more and improved more than the Shannonsiders from the first day. On that occasion Tipp led by five points before slumping in the last ten minutes to a two points defeat. But in the high noon shootout in today’s game which began at 11.30, there was to be no let up as Tipp enacted sweet revenge.

The victory puts Tipperary minors directly into an All-Ireland semi-final in Croke Park; whilst Limerick will now go into a round robin with Galway and Kilkenny to determine which two earn semi-final slots. Dublin, having beaten Kilkenny in the Leinster final on Saturday evening last at Portlaoise, are also directly into the last four.

Having trailed by 0-2 to 0-0 after four minutes, Tipp got on the scoreboard with a James Devaney free in the eighth minute, followed quickly by a brace of nice points from Sean Hayes to edge ahead.

By the end of the first quarter, a tenacious and hard-working Tipp were 0-5 to 0-3 ahead, following two difficult frees expertly converted by Devaney.

A run of four unanswered points for the Tipp under under 17s in a four minute spell between 18 and 21 minutes from the excellent Sean Phelan, Ryan Renehan and Devaney (2, one from a 65) gave Tipp a six points advantage and room to breathe in the stifling heat of the Stadium.

After a break of 12 minutes without a score Limerick responded with points from Cormac Ryan and Patrick Kirby, separated by a lovely effort off his left side by Sean Hayes, his third of the opening period.

In dying minutes of the half James Devaney and Cian O’Farrell added points for Tipp, O’Farrell’s effort  particularly well executed in full flight, while Cathal O’Neill kept Limerick ticking over with frees, scoring four over the opening half hour.

Five down at the break (0-12 to 0-7), Limerick came out with guns blazing for the second half but three wides inside the opening four minutes didn’t help their cause. Indeed it was Tipp who had the half’s opening score, again from O’Farrell from 45 metres after five minutes.

The third quarter overall was low-scoring and at the three-quarters mark Tipp still had their cushion, leading 0-15 to 0-9, with Cormac Ryan (2) for Limerick and Ryan Renahan for Tipp (after a nice flow of passes) raising white flags.

Sean Phelan’s second point of the game from wing back was answered by two in a row from the Treaty side as they desperately tried to gain traction but Tipp were not in the mood for repeating the mistakes of the Gaelic Grounds on 20th May.

As space began to open up Tipp began to express themselves more, James Devaney finishing off another fine move with a point in the 51st minute.

A minute later the game was virtually put to bed with Tipperary’s goal. A move involving Jack Morrissey and James Devaney was excellently finished to the net by Mullinahone’s Mikey O’Shea, not long on the field, for a 1-18 to 0-12 lead.

And if O’Shea’s goal was the game’s most decisive score, the following point, again from another Mullinahone man, full back Conor Whelan, was the point of the game. In swashbuckling style, a la Padraic Maher, Whelan broke from defence on a long solo run through the centre of the field before flicking the sliothar over for a rousing score in the 55th minute.

In the 60th minute Sean Hayes added his fourth of the day for Tipp, before Limerick scored a consolation goal four minutes into time added-on when substitute Bryan Nix, eventually got one past Aaron Browne. It was rough justice for Browne who throughout the game had magnificently denied the Limerick side on at least three occasions with excellent saves.

In light of the disappointing run of the senior hurlers this season, this victory for the minors is a shot in the arm for Tipperary hurling. Hopefully there will be a shot in the other arm on Wednesday night when the under 21 hurlers take on Cork in their Munster final at Páirc Uí Chaoimh.

Tommy Dunne can take great encouragement from today's performance also, and with the fact that these youngsters (under 17 this year) seem to have learned a lot from a few hard lessons in defeats to Limerick and Waterford in which good leads were let slip late on.

This much improved display gives momentum now to the side with an All-Ireland semi-final ahead. The work rate, with and without possession, was commendable all through, and a strike rate of 1-20 was pleasing afterwards to manager Tommy Dunne. The wides were kept to single figures also.

Aaron Browne put in an excellent hour in goal behind a strong full-back in Conor Whelan while Conor O'Dwyer, Sean Phelan and captain Johnny Ryan also had their moments in a tight defence.

In the forward division James Devaney was top scorer with eight points but Sean Hayes, Cian O'Farrell and Ryan Rehehan took some nice points also. First sub on, Mikey O'Shea caused a few problems for the Limerick defence and was deserving of a well-finished goal to seal the game for Tipp.

More in this week's edition of 'The Nationalist' on Wednesday.