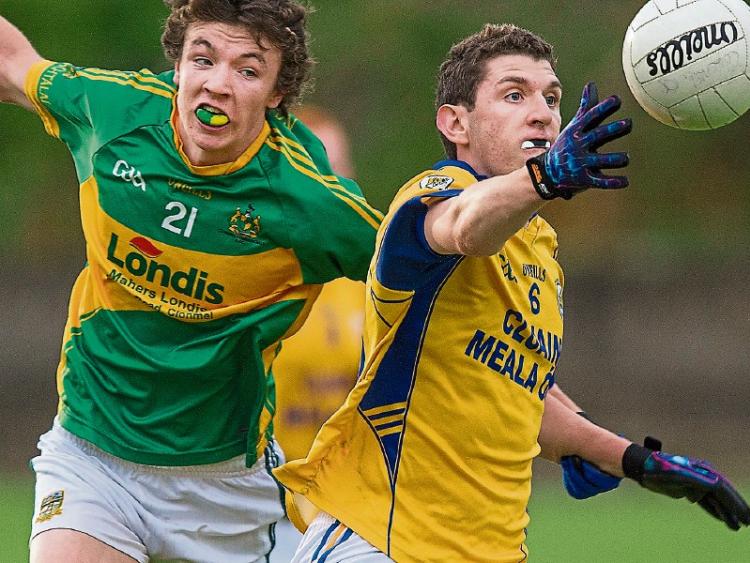 Darragh Kearney seen here in opposition to Jack Kennedy, will captain Clonmel Og in the South IFC Final against Fr. Sheehy's at Monroe on Bank Holiday Monday at 7 pm.

The South Tipperary Intermediate Football Championship Final between Clonmel Og and Fr. Sheehy’s of Clogheen goes ahead at Monroe  on Bank Holiday Monday next, 6th August,  with a throw-in at 7 pm.

That scoreline was a reversal of a result in the group stages earlier last year when Fr. Sheehy’s gave ‘The Og’  “a bit of a trimming” according to Clonmel Og captain, Darragh Kearney, who generously took time last weekend to look ahead to the Bank Holiday final.

“This time round again it will depend on who turns up the better on the day” said Darragh, who will once again have the honour of leading his club out in this year’s divisional decider.

A former county under 21 footballer,  Darragh is the youngest of three Kearney brothers who have given great service to the Ned Hall Park club since they were toddlers. Eldest brother Karl will also line out against Fr Sheehy’s, but middle brother Shane sadly has had to hang up his boots after undergoing three cruciate ligaments procedures over the years. The Kearneys don’t give up easily.

All three brothers are dyed-in-the-wool Clonmel Og club men, and ‘tis no wonder as their dad Eddie has been a pillar of the club since its foundation back in 1984. As clubmen go, anywhere the length and breadth of the country, few are as passionate and hard-working at club level than Eddie Kearney. He wears a gold and blue heart on his sleeve always, sauntering up and down sidelines, encouraging players to give of their best. Always honest, always passionate.

GONE AGAINST THE TIDE

Living within a stone’s throw of Moyle Rovers’ Monroe grounds, over the years the Kearneys have literally gone against the tide in support of their beloved club and in nailing their colours to the gold and blue mast of ‘The Og.’ While the masses from Clonmel have been driving past Clonmel Og for years and heading north to train and play with Moyle Rovers at Monroe, the Kearneys have always taken the Fethard Road into town in the opposite direction.

“There was never a question of us ever playing with Moyle Rovers, ever,” Darragh emphatically clears up - with a loyalty in which  apples don’t fall far from the tree.

“My father has been a Clonmel Og man always and since we were toddlers, seven or eight year-olds, we were Clonmel Og too. It never ever crossed any of our minds to be anything other than Clonmel Og players. The club means everything to us, my Dad, the brothers, and even my sister (Aisling) lined out for Clonmel Og when we had a girls team,” said Darragh who also gave a stint on an extended Tipp senior panel in the past.

The club recorded their only county intermediate success back in 2008 when they beat Kilsheelan/Kilcash in the final, a victory that sent them up to senior grade, where they soldiered until their relegation after five seasons in the top tier.

‘The Og’ were relegated from senior grade in 2014, and they have been knocking on the door almost year-in year-out since to get back to the top flight, losing two county finals in the past three years.

Indeed in 2016 when they didn’t get to the county final they were beaten by Fethard who went on to win the county championship the same year. So in each of the three years since they have dropped down Clonmel Og have made a great stab at promotion.

“We lost the final in 2015 against Upperchurch/Drombane in New Inn and it’s one we all look back on with a certain amount of regret. It was one that definitely got away from us that day. We led by five points to no score early on and then they scored a penalty awarded immediately after another penalty was saved,” added Darragh.

In that final Clonmel Og were still 0-8 to 1-1 up at half-time but a second goal for the Midmen in the second period brought them right back into it. In the last six minutes Upperchurch tagged on a couple of points to deny Clonmel a rare county success.

“But maybe we weren’t really ready for an immediate return to senior grade then and if we had gone up we might have have come back down as quickly. We needed a stronger panel then than we had to compete with the better senior clubs and we simply didn’t have the numbers then,” continued Darragh, who teaches locally in Ss. Peter & Paul’s in Clonmel.

“We lost out to Fethard in the South Championship in 2016 and last year we got back to the county final ourselves. We came up against Kildangan in Dundrum but were beaten in the end. We were down by four at half-time, got back into it with a Graham Quinn goal, but we were caught with a sucker punch at the very end when they got a goal themselves,” regretted Darragh who was also captain that day.

THINGS ARE LOOKING UP FOR CLONMEL OG

“But I think things are looking up a bit for Clonmel Og again. We have a panel of about 25 or so and we’re putting in a good effort, busy at training, both hurling and football. The new structures in the GAA are giving us a few more games and as a result, a lot more training. Games have been coming thick and fast for us and we are still involved  in Intermediate Football and Junior A hurling,” he added.

“But what is most pleasing is that we have a few good lads coming through from minor and they are challenging for places on our starting team. Players like Shane O’Connor, Cian O’Sullivan, Kevin Hawkins, who all played in the South Minor final against Cahir last week, they are all pushing for places. And Jack Dillon is another youngster coming through too. We also have Alan Brannigan and John Tierney to add to last year’s panel, but we will be missing Colin O’Mahoney who is now in Australia and Colin is a big loss for us,” added the team captain.

Darragh pointed out that this year’s format is changed completely from previous years. What’s on offer against Fr. Sheehy’s in the South Final is silverware, nothing else. There is no longer a ticket to the county stages to be won.

This year’s stand-alone South competition saw Clonmel Og enjoy knock-out wins over some neighbours children in Moyle Rovers (quarter-final) and Clonmel Commercials (semi-final). While Fr Sheehy’s were impressive in their semi-final win over Fethard, who were at senior grade last season.

“Yes, it’s different this year from that point of view. We are in a County group with Rockwell Rovers, Golden/Kilfeacle and Carrick Swans and it is how we fare in that that will determine where we go in the county. We’ve only played the one game, a draw against Rockwell Rovers, so there is plenty of football to be played yet before any county titles are given out,” added Darragh.

OUR FOCUS IS ONLY ON FR. SHEEHY'S

“For now we won’t concern ourselves with the county. Our focus is only on Fr. Sheehy’s and a South title. We haven’t won too much silverware so we would love to win this one. (Clonmel Og also lost a South Intermediate final in 2015 when losing to Mullinahone). But Fr Sheehy’s are a good team and we beat each other on different days last year. This one too could go either way. They have some nice players, English, Hyland, Flynn, O’Connor and we know exactly what we are facing into,” added the 25 year-old Clonmel Og captain.

“Clonmel Og want nothing more than to get back up to senior and there is a great spirit in the club right now. We were all there at the minor final the other night supporting each other and that’s good for a club. Brian Gentles is the manager of the intermediates and Brian knows what will be needed to try and get us over the line. Our selectors this year are Micheál McNamara, Joe Barrett and Pakie Walsh,” added Darragh.

“It’s a cliche we all use all the time, but it’s whatever team can get the best performance out on the day will come out on top. We could do with a win for the club, and hopefully it will work out for us on the day,” concluded Darragh.