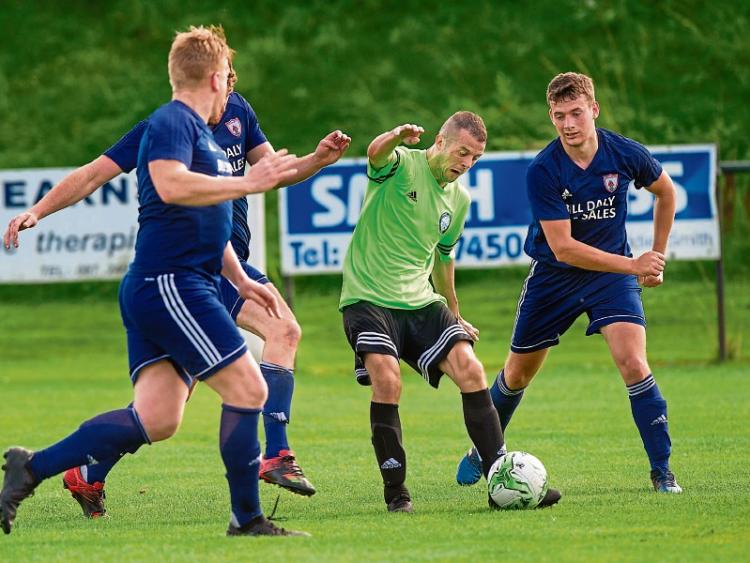 Despite being surrounded by a sea of blue Bansha Celtic players Kyle Ryan (Clonmel Celtic) still curls his shot on goal away in Sunday's Premier League game at the By-Pass in Clonmel.

Clonmel Celtic still await their first points of the season after going down by 4-2 to a rapidly improving Bansha side, and must now begin to start worrying about the dreaded relegation trap door that could start to loom in the New Year.

The last thing a team low in confidence needed was a poor start and unfortunately after just a minute a ball over the top caught the home side cold and Bernard Fitzgerald finished to put the visitors a goal up.

Celtic looked for an early response with Paul Kennedy and Kyle Ryan both going close before they equalised in the 1thminute. This time the Bansha defence looked vulnerable and Ryan bundled the ball home from close range after good work by Kennedy. However the hosts shot themselves in the foot again two minutes later when they allowed a cross through their six yard box and Steven O'Dwyer finished at the far post to see the visitors regain their lead. It got worse again for the home side when once again a route one ball over the top was their undoing and Tony Egan scored to put Bansha two goals to the good on the half hour mark.

The visitors were on top for the reminder of the half with Raymie Boyle in the home goal getting down well to push a free around the post to deny Bansha a fourth. The home side made a couple of substitutions at the break and improved a little in the second period. However chasing the game they were always vulnerable to the counter and ten minutes in Bansha effectively put the game to bed when Bernard Fitzgerald broke clear to make it four goals to one.

Shortly after that the hosts lost stand in keeper Raymie Boyle to a hamstring injury with Paul Kennedy deputising in goal. In fairness to Celtic they didn't throw in the towel and Kyle Ryan scored at the second attempt to make it four to two just after the hour mark.

They continued to push forward but it was too big a mountain to climb and Bansha always threatened on the break but poor finishing, last ditch tackles and a couple of timely interventions meant they didn't add any more.