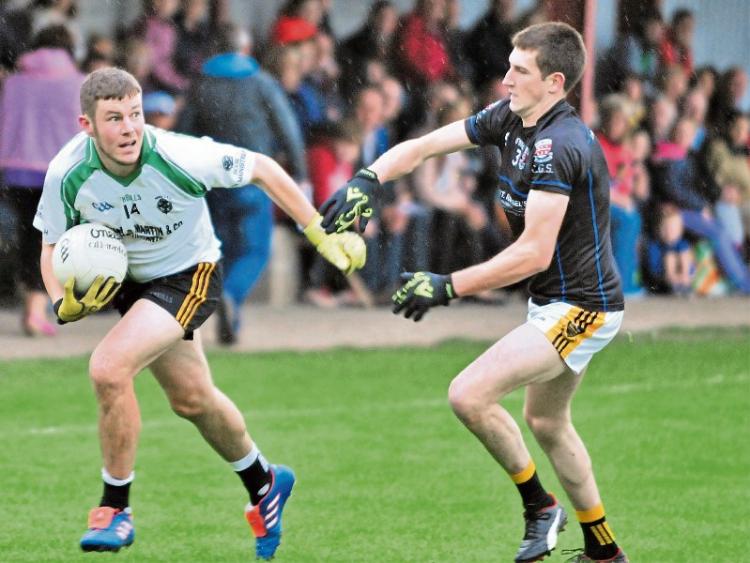 Darren Lowry Arravale Rovers getting past Matt Ryan the Upperchurch Drombane full back in the County SFC game in Dundrum recently. Arravale face Loughmore/Castleiney in Clonoulty this Friday night.

The spotlights - or probably more correctly the floodlights - are on the County Senior Football Championship this weekend with two quarter-finals down for decision on Friday night.

With both Killenaule and Loughmore/Castleiney still involved in the county championship in both codes, Friday’s two game have been brought forward by a week to allow both teams some breathing space in an already congested fixture list.

In New Inn on Friday night (7.45) Killenaule take on Moyle Rovers in a repeat of last year’s semi-final in which ‘The Robins’ prevailed by a single point, 2-16 to 1-18 after extra-time. It was the third meeting of the sides within a matter of weeks, which included a draw which also went to extra-time, a point win for Rovers (South semi-final) and the county championship win for Killenaule.

This year  Rovers topped their group with three wins against Aherlow Gaels, Upperchurch/Drombane and Galtee Rovers; their opponents Killenaule had to settle for runners-up spot when (fielding an understrength side) they lost their final group game to Ballyporeen. They had previously defeated Cahir and Kildangan to book their place in the last eight.

Nothing separated these sides last year and little is expected to be between them once again this time round. The fact that Killenaule are nursing a few injury worries -  as well as being involved in both a preliminary hurling county quarter-final and indeed a Roinn I relegation play-off - must hand the Monroe side a slight  edge in preparation at least.

Up the road in Clonoulty at 8 pm on Friday, the second of the quarter-finals is down for decision. Here dual club Loughmore/Castleiney take on Arravale Rovers with the Mid champions hotly tipped to advance to the semi-finals. Three times winners of the county title in the last five years, Loughmore went unbeaten through Group 1 with wins over JK Brackens, Drom/Inch and Kilsheelan/ Kilcash. The West side finished runners-up in their group to Moyle Rovers, recording wins over Galtee Rovers and Upperchurch to secure a quarter-final berth.

It will be a huge challenge for the Conor Counihan coached Rovers but they regularly raise their performances against Loughmore and will do so once again under the Clonoulty lights. Last year, Arravale pushed county champions Commercials to a point in Dr. Morris Park in the quarter-finals. At full-strength Arravale will test Loughmore but whether it will be enough is hard to see.

Elsewhere the County Intermediate Football Championship also gathers pace with a couple of interesting quarter-final games scheduled over the weekend.

On Saturday, Clonoulty and Grangemocker meet in Cahir, while on Sunday, in Boherlahan, Clonmel Commercials will play Borrisokane.

A very interesting County Minor ‘A’ football semi-final is fixed for New Inn at midday on Sunday when Galtee/ Golden and Cahir clash for a place in the county final.

As the hurling and football seasons progress towards their concluding stages there are some divisional finals down for decision in West and South this weekend.

Both South minor hurling finals go ahead with the ‘A’ decider between Moyle Rovers and Skeheenarinka/Clonmel Og fixed for Cahir at 3.30 pm on Sunday. It promises to be a cracker with reigning champions Moyle Rovers - with up to   a dozen of last year’s panel still involved-favourites to win through for another attempt  at the county title.

While Moyle Rovers defeated Sunday’s opposition  a few weeks back, the combination  side were very understrength that day. On Sunday last the combo came through narrowly against St. Mary’s and will relish another crack at the South champions.

The South Minor ‘B’ final is a repeat of the ‘B’ football final between Mullinahone and Kilsheelan/Kilcash.  Mullinahone, following a big win over Killenaule last weekend, will be fancied to complete their South double.

Over in the West the Junior B football final will go ahead on Sunday in Golden at 1.15. Clonoulty/Rossmore, appearing  in their first final in this grade,  with challenge the more experienced  Sologhead.