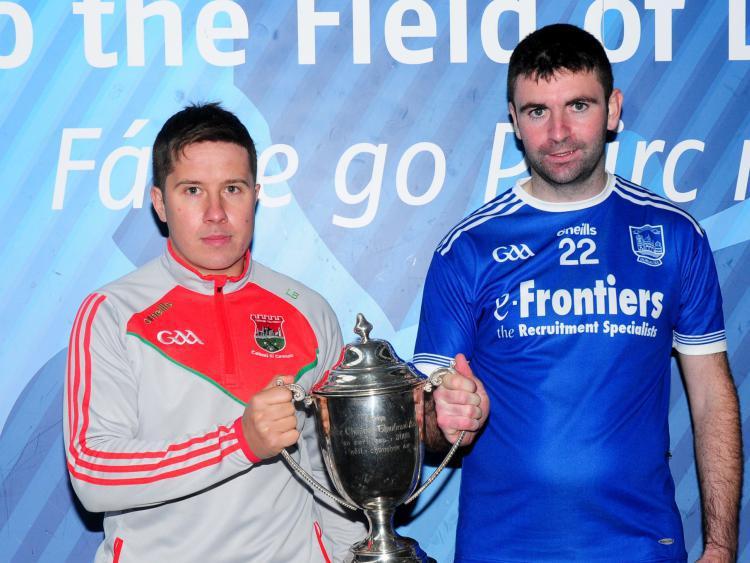 A sensational Thurles Sarsfields comeback stunned Cashel King Cormacs in a dramatic Tipperary Water County Intermediate Hurling Championship final played at Holycross on Sunday afternoon - favourites Cashel led 0-11 to 0-5 at the break, but the Blues roused themselves in spectacular fashion and thanks to a Kevin Dunne goal tied the game before surging toward a three-point win (1-16 to 0-16).

Thurles Sarsfields, who are guided by manager Andy Ryan, proved too strong for Shannon Rovers (1-17 to 0-12) in the semi-finals. The Blues beat Cappawhite (1-24 to 1-13) and Carrick Davins (2-23 to 0-14) during the group stage of the competition before losing out to Cashel King Cormacs (1-15 to 0-14). In the preliminary quarter-finals Sars proved marginally too good for Moyne-Templetuohy (1-18 to 1-16) while they enjoyed a thirteen-point win over Golden-Kilfeacle in the last eight (2-19 to 0-12).

Both Cashel King Cormacs and Thurles Sarsfields were promoted to Roinn II of the Tipperary Water County Senior Hurling Championship prior to Sunday’s final.

The Séamus Ó Riain Cup semi-finals (Roinn II of the Tipperary Water County Senior Hurling Championship) took place on Saturday, October 6th when Burgess and Moycarkey-Borris earned themselves promotion to Roinn I of the county senior hurling championship courtesy of respective their victories over the Templederry Kenyons (2-17 to 2-14) at Dolla and JK Bracken’s (1-18 to 0-18) at The Ragg. Burgess will now face Moycarkey-Borris in the decider at Semple Stadium, Thurles prior to the county senior hurling final on Sunday, October 21st (1.15pm).

Carrick Swans were relegated to Roinn II of the Tipperary Water County Senior Hurling Championship on Sunday, October 14th when the 2017 South champions lost out to Killenaule (2018 South champions) in a relegation play-off (2-20 to 3-6).

Portroe will take on Mullinahone (the fixture details remain to be confirmed for this contest) to determine which other side faces the drop alongside Carrick Swans.

In group two Moyle Rovers had already beaten Carrick Davins (3-18 to 0-12) so their most recent victory has secured their status.

Skeheenarinky booked their place in the Tipperary Water County Junior A Hurling Championship final thanks to a narrow win over Toomevara (2-13 to 1-14) at Dundrum on Sunday. Meanwhile not even extra-time could separate Boherlahan-Dualla and Clonoulty-Rossmore in their respective semi-final clash (4-17 to 3-20).

Extra-time was required to separate Mullinahone and Cashel King Cormacs in the semi-finals of the Tipperary Water County Junior B Hurling Championship with Mullinahone prevailing by three points in the end (4-14 to 2-17) on Saturday. The first of the semi-finals took place on Sunday, October 7th when Boherlahan-Dualla got the better of Templederry (2-12 to 2-8).

On Saturday, October 13th at Leahy Park, Cashel Moycarkey-Borris proved marginally too good for Cappawhite Gaels (2-12 to 1-12) to claim the Tipperary Water County Minor A Hurling Championship crown - Moycarkey-Borris surged into the final thanks to a 3-17 to 3-10 victory over Kiladangan.

Drom & Inch claimed the Tipperary Water County Minor B Hurling Championship crown at Clonoulty on Saturday, October 13th when the Mid men enjoyed a single-point win over Knockavilla Kickhams (1-15 to 2-11). In the semi-finals Drom & Inch proved far too strong for Kilruane (3-13 to 0-8).