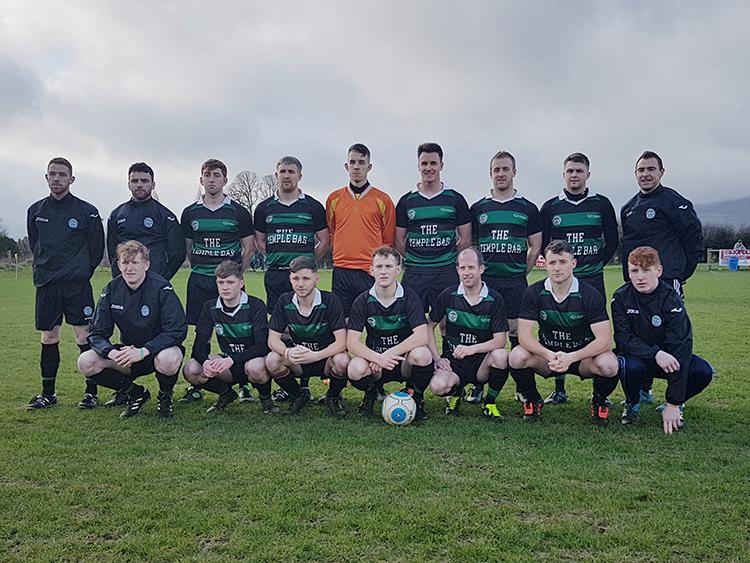 The Blackcastle Templemore Harps squad of players which narrowly lost out to Ballymun United in the sixth round of the New Balance FAI Junior Cup in Templemore on Sunday afternoon.

The Blackcastle Templemore Harps lads gave it everything they had, but narrowly missed out on a place in the last sixteen of the New Balance FAI Junior Cup when losing 1-2 against Ballymun United of the Leinster Senior League on Sunday afternoon. On the balance of play Ballymun probably deserved to progress on this occasion, but BT Harps asserted themselves and with a bit of luck they could well have upset the visitors to Templemore. Cruelly, Harps were denied a late equaliser when Johnny Coleman’s rasping penalty was saved brilliantly by Ballymun ‘keeper Graham Bedford with just seven minutes to play. Elsewhere, however, there was encouraging news as Peake Villa, Clonmel Town and St Michael's progressed to the last sixteen of this prestigious competition.

BT Harps attracted a bumper crowd to Priory Place in Templemore on Sunday afternoon and rewarded their passionate supporters with a determined performance.

Ballymun United, however, started much the better and Harps ‘keeper Stephen Byrne was asked to save a stinging effort from Karl O’Reilly in the first minute. Five minutes later Ballymun took the lead; following some neat combination play down the right Keith Hanney attempted to pick out Owen Humphries with a right-footed cross and although Hanney failed to find his centre-forward the prevailing wind carried the ball into the top corner leaving Stephen Byrne with no chance (0-1).

BT Harps improved thereafter and Ben Stapleton came agonisingly close to stabbing home Dean McEnroe’s cross in the tenth minute. Six minutes later, however, Blackcastle Templemore Harps were back on terms. BT Harps were pressing superbly in the opposition half of the field and their aggression earned a terrific reward for the home side in the 16th minute when Ballymun ‘keeper Stephen Robinson failed to deal with Dean Hayden’s back pass and Jamie Bergin scrambled home a rousing goal (1-1).

Ballymun United, it must be said, responded very well to the challenge posed and created three notable chances during the remaining twenty-nine minutes of the opening half. In the 25th minute BT Harps ‘keeper Stephen Byrne did well to smother a Sam Dodd opportunity, Ross Purdy lifted a great chance over the bar in the 31st and then four minutes later Byrne was on hand to save two efforts in quick succession from Karl O’Reilly and Owen Humphries.

Three minutes into the second half Stephen Byrne was called on to conjure an fingertip save which denied United’s Owen Humphries a cracking goal, but BT Harps went agonisingly close to taking the lead in the 50th minute when Johnny Coleman was ruled offside after he headed home Cathal Scully’s delivery from a free kick.

Stevie Nolan, a most obvious candidate for the man of the match award, was excellent throughout this contest and almost scored a memorable goal in the 52nd minute when the midfielder beat three men during a jinking run, but subsequently fired over from a tight angle.

Harps appeared to be getting the upper hand on their opponents, but Ballymun counter-attacked to devastating effect in the 62nd minute, found Nicolas O’Brien on the right and Keith Hanney buried O’Brien’s cross with a first-time finish (1-2).

Two minutes later Dean Hayden did especially well to block an Éanna McBride effort while Harps ‘keeper Stephen Byrne was called into action once more in the 69th minute when Keith Hanney demanded an excellent stop from the Templemore custodian.

Finally, in the 82nd minute it appeared as if BT Harps would be rewarded for their endeavour. Dean McEnroe played Éanna McBridge through on goal and although sub ‘keeper Graham Bedford saved superbly BT Harps’ Craig Byrne gathered the rebound and was unceremoniously fouled for a penalty. Johnny Coleman took responsibility for the spot kick and although the centre-half thundered in a mighty effort Bedford got down brilliantly to his right to save.

In second half injury time Cathal Scully found the head of Johnny Coleman with a well-flighted delivery from the right, but Coleman’s header flew over and with that went BT Harps’ chances of forcing extra-time.

The sixth round of the New Balance FAI Junior Cup featured five Tipperary clubs in all. And, one of the most eye-catching ties saw Thurles outfit Peake Villa embark on a daunting 417-kilometre journey to take on Greencastle Celtic (Inishowen District League) in Donegal on Sunday. And, Peake Villa famously forced their way into the last sixteen of the competition following a penalty shoot-out. Villa fell behind in the game, but earned a draw thanks to a Mikey Wade strike (1-1). Then, in the shoot-out, Darren McGuire proved the hero when he fired home the winning spot kick (4-2).

Clonmel Town kicked off the weekend’s FAI Junior Cup action with a home victory over Wayside Celtic of Dublin on Saturday when winning 3-1. Newport Town travelled to face their Limerick District League counterparts Aisling Annacotty in Annacotty on Sunday and lost 1-2.

Meanwhile an outstanding St Michael’s team, who won the competition outright as recently as 2014, faced last season’s semi-finalists Newmarket Celtic (Clare & District League) in Tipperary on Sunday and won 2-0. A superb win for the Saints.

St Michael’s, Peake Villa and Clonmel Town are in the draw for the last sixteen.