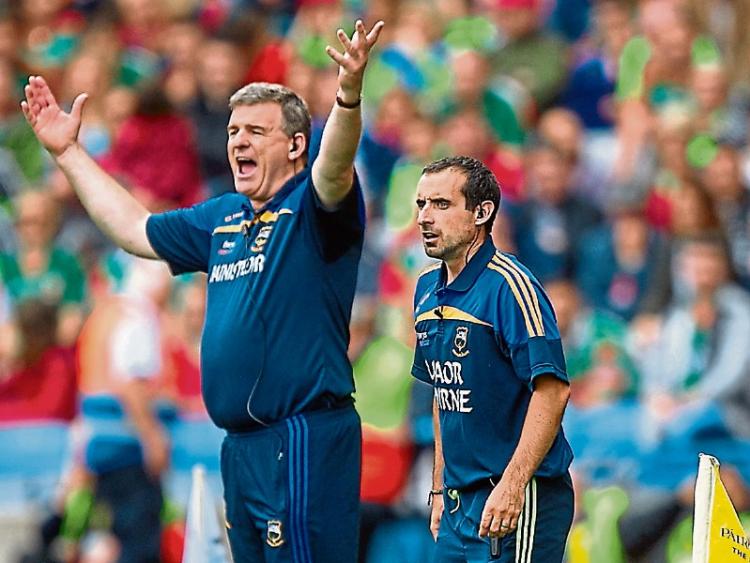 Liam Kearns and Shane Stapleton will have a lot to say after a comprehensive defeat for Tipperary against Limerick at Semple Stadium this evening (Saturda).

Hopes that Tipperary senior footballers could put the disappointment of league relegation behind them were truly dashed with a comprehensive championship defeat at Semple Stadium, Thurles, on Saturday evening.

Against Division 4 outfit Limerick, Liam Kearns’ side suffered a seven points defeat in what must surely be the poorest performance in his four-year reign as Tipperary manager. But there can be no complaints, the Shannonsiders were fully deserving of their victory for a display that was full of commitment and hunger right from the start.

Indeed, the visitors might have felt somewhat disappointed going in at half-time only on level terms at 0-8 apiece, which in fairness didn’t reflect their efforts over the opening 35 minutes. However, in the second period, the Billy Lee managed side put a somewhat sluggish and rudderless looking Tipperary to the sword with three goals that quite simply Tipperary had no answer for.

Operating in Division 4 of the National Football League this year, where they recorded just two wins (against London and Waterford), not many expected football minnows Limerick to bother the home side. Expectations were that a Tipperary side with most of their absent players now back and available would be too strong for them. However, the rank outsiders took the game to Tipp from the outset and had the first two points of the game (Jamie Lee free and Adrian Enright) before Tipp eventually got on the scoreboard in the ninth minute with a Michael Quinlivan fisted point.

Two further Tipperary points from Conor Sweeney (free) and a Hawkeye-adjudged effort from Steven O’Brien put the hosts 0-3 to 0-2 ahead by the 13th minute and one felt Tipp’s slow start was now behind them. However, Limerick gave as good as they got and four times the sides were level in the first half before going to the break all square.

Centre-back Iain Corbett, who was the game’s outstanding player, levelled matters for Limerick when soloing through for an excellent point on the quarter hour, before Conor Sweeney and Adrian Enright swopped further points to make it 0-4 each after 17 minutes.

Two points by Limerick corner-forward Jamie Lee, one from an acute angle free off the ground, put the boys in green two to the good after 23 minutes. Liam Casey then finished a good move for Tipp with a point only to be answered almost immediately by another fine point from Jamie Lee after superb fielding by Limerick midfielder Tommie Childs.

A pair of Tipp frees from Conor Sweeney and Liam McGrath made it 0-7 each as half-time approached, and both sides raised another white flag each in time-added on via Cillian Fahy (L) and Michael Quinlivan scoring to make the score 0-8 to 0-8 at the break.

Tipp could consider themselves somewhat fortunate to be going to the break on par as Limerick certainly showed the more passion and commitment in the opening 35 minutes. With a bit of regrouping in the Tipperary dressingroom at the interval most expected the home team to kick on after the resumption.

Liam Kearns introduced Liam Boland and Bill Maher at half-time but it was Limerick who took the lead again just 18 seconds in when Iain Corbett pointed superbly with the outside of his boot.

A significant 10 minute then period followed in which Tipp with plenty of possession failed to score, kicking three wides and punting another two efforts harmlessly into the arms of the Limerick keeper. And they paid dearly for this profligacy in the 46th minute when Limerick midfielder Darragh Treacy put Iain Corbett through on goal and the Newcastle West clubman finished with a rocket to the back of Evan Comerford’s net.

Another 10 minutes would pass without a further score and when it did come it was another goal for Limerick. A speculative crossfield punt into the Tipperary goalmouth wasn’t dealt with and when the ball broke to Cillian Fahy he blasted to the net to put the 9/1 outsiders into a seven points lead with a quarter of an hour remaining.

Just short of 24 minutes into the second half, Tipperary eventually got their first score, a Conor Sweeney free. But hopes that it might rally the troops never materialised as the next two scores were both Limerick’s, points from Jamie Lee and Cillian Fahy again.

Seven minutes from time Tipperary got their goal, an individual effort from Michael Quinlivan, when he recycled a ball played to him by Liam Casey, and buried it into the bottom corner of Donal O’Sullivan’s net.

A free four minutes from time by Liam McGrath reduced the margin to four points, Tipperary's last score of the game which delivered a paltry 1-2 for the entire second 35 minutes.

The Tipperary comeback that never really looked on was finally put to bed two minutes from time when Seamus O’Carroll and Sean McSweeney opened up the Tipp defence once more and after an initial effort was saved substitute Peter Nash finished to the net for a 3-11 to 1-10 win. That third goal was the final nail in the coffin that dumped the 1/20 red hot favourites out of the Munster Championship at the first hurdle.

The hangover from the League in which Tipp won just a single game (at home to Donegal) had continued into the championship, and now only the lottery of the Qualifiers remains for Liam Kearns' side. If Tipperary, more or less back to full strength, couldn’t, with the aid of home advantage, turn around the disappointment of relegation in eight weeks against Division 4 team, it is hard to see where the hunger and determination that was clearly missing on this occasion is going to come from now. We can only wait and hope now for a decent draw.