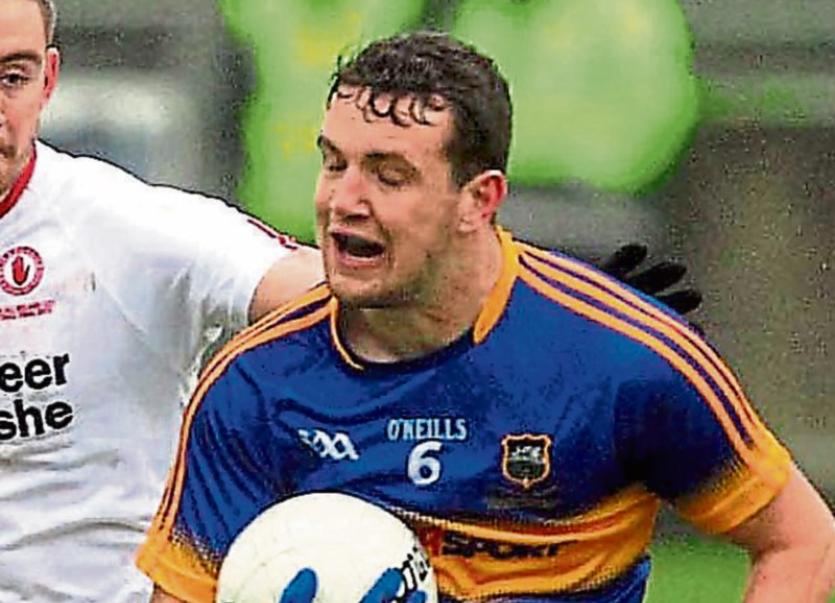 Reigning county senior football champions Moyle Rovers booked their place in this year’s quarter-finals with a workmanlike 10-points win over Eire Og Annacarty/Donohill in a game played in glorious sunshine at New Inn this afternoon.

The West Tipperary side, first round victors over Killenaule, took the game to the champions from the start and led after 10 minutes by 0-3 to 0-2. However, thereafter the Powerstown/Lisronagh side got into their stride and, for the most part, bossed the remainder of the game on their terms.

Once they could impose their fast counter-attacking game on their opponents the Niall Fitzgerald team were able to express themselves better and by half-time led by 0-8 to 0-3, having held Eire Og scoreless for the last 20 minutes of that opening period.

After just 38 seconds Richie Power had Rovers on the scoreboard with a fine left legged point from 30 metres after a great run down the wing by Luke Boland. A Dinny Crosse free, won by himself, levelled it up after three minutes.

Diarmuid Foley then finished off a Luke Boland-Cillian Crowe move to edge Rovers ahead again before Dinny Crosse and Paul Devlin kicked excellent points for Eire Og to put them ahead for the only time in the game after 10 minutes.

A Stephen Quirke free on the quarter-hour brought the sides level for the third time before Rovers kicked on with five in a row from play in the second quarter from Luke Boland, David McGrath, Luke Boland, Stephen Quirke and Richie Power. At this juncture the Rovers were pressurising the Eire Og kick outs, particularly Quirke at centre-forward, and their pacey forwards were finding the space to do damage.

Outstanding throughout that opening period for Rovers was Luke Boland who besides kicking two superb points ran at the Eire Og defence when opportunity arose. Long-serving Richie Power also chipped in with two excellent points.

Eire Og re-emerged for the second half determined to have another cut at the champions and had the margin back to three points after two points from Dinny Crosse, the first a superb effort from play, the second a free won after Tom Fox attacked the centre of the Rovers defence at pace.

But that momentum was halted in the 38th minute with a superbly finished goal by Diarmuid Foley after referee John Butler had allowed the advantage rule after a late challenge on young Diarmuid Mulcahy that forced him off injured.

Eire Og goalkeeper Daragh Mooney kicked a free from 44 metres to bring the score to 1-8 to 0-6 at the three-quarters stage before Diarmuid Foley goaled for the Monroe side to put them eight points clear.

A move involving Shane Lonergan (just on for the injured Mulcahy), Diarmuid Foley and Ben Owens, saw Owens deliver the final pass across the goalmouth for Foley to tap home.

Credit to the Westerners they refused to throw in the towel and in a mini rally they had the next four points from Paul Devlin, Paul Downey, Connie Bradshaw and a Paul Downey (free) following an off the ball incident.

With just four points between them and six minutes remaining the possibility of a shock result briefly re-surfaced but clinically Rovers responded with an extra gear and two points in a minute from Aidan McGrath and Shane Lonergan to ease the pressure. ( That 57th minute point from McGrath was their first point of the second half). Rovers will still have plenty to work on for the remainder of this championship.

A minute from time Shane Lonergan capped a great day when he finished off a move involving Shane Foley and David McGrath to flash a rocket past Daragh Mooney.

Shane Foley wrapped up the scoring in the final minute when finishing a polished inter-changing move initiated in defence by Paddy Morrissey.

Moyle Rovers will be well pleased to be through to the last eight and are under no pressure now in their final encounter to come against Killenaule.

Today the likes of Paddy Morrissey, Luke Boland, Jack Harney, David McGrath, Richie Power and Diarmuid Foley were most prominent. And with the likes of Liam Boland, Rian Quigley and Danny Owens absent today, Rovers should be a force to contend with in the latter stages.

For Eire Og, it is now down to a winner-takes-all showdown for a quarter-final place with Upperchurch/Drombane who defeated Killenaule on Friday night. With a win apiece, the victor the next day will advance.

Today Eire Og took the game to the champions and without the injured Brian Fox to call on did reasonably well in stages. They stuck to their task before a late 1-3 to Rovers in the dying minutes gave the scoreboard a lop-sided look.

Best on the day were the likes of Eoin Kennedy and Eoin Bradshaw, Tom Fox, Paul Devlin, Diarmuid Ryan and Donal O'Dwyer.