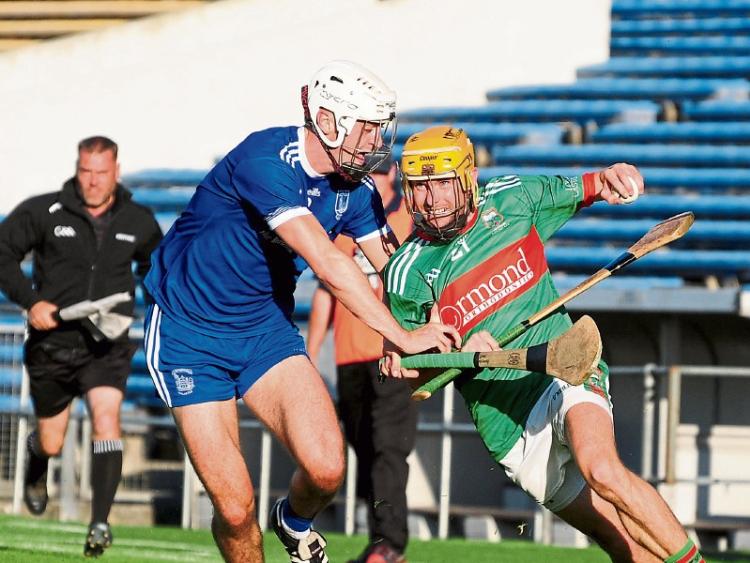 Sun-soaked pitches at the weekend produced some notable and noteworthy results in the county hurling championships but nothing, I’d suggest, of the shock variety.

This weekend the sorting and sifting in the various groups will be completed ahead of the knock-outs in this shortened and sharply-focused championship season.

Headline features at the weekend were Sarsfields’ thumping win over Loughmore and Clonoulty’s equally resounding outcome against Nenagh. The results may not have been a surprise but the emphatic nature of both scorelines will have caused people to sit up and take note.

Borris-Ileigh too drove on in their mission to retain honours while Kilruane and Kildangan got back to winning ways. So, the big guns are lining up as we head down the home straight of a novel championship in a year shadowed by a novel virus.

Sarsfields are back. The Blues hammered out a warning note on Friday evening at the Stadium in a high-scoring spectacle. Underwhelming Loughmore simply couldn’t live with it and will need a major rebound in their crunch tie with Kilruane MacDonaghs this weekend if they’re to survive in the series.

A glorious sun-washed Friday evening and a baize-like surface provided the perfect setting at the Stadium for this local derby clash of Sarsfields and their country neighbours from Loughmore and Castleiney.  Voices of players and others easily echo in the hollow stadium, lending a strange atmosphere to these fixtures.

It was a strange outcome too, not in the result but in the nature of the contest. There’s enough history between these sides to expect a riveting, close-up and personal collision with the outcome in doubt for some time.

Not on this occasion. This was a free-flowing exhibition of top-of-the-ground hurling, the type of game Sarsfields revel in. Just look at the stats of the match: 55 scores in total with just a handful of wides. It was crisp, it was snappy, light-touch hurling, an absolute scorefest. And Loughmore were on the receiving end.

The advantage was, perhaps, marginal enough for the first half, but in the second spell Sarsfields gradually slipped away and Loughmore were struggling for respectability.

In all my years watching Noel McGrath I’ve never seen him so ineffective. Normally he’s the commander-in-chief, pulling the puppet strings, but this time he was anonymous. Without his influence Loughmore were rudderless. John McGrath alone took the battle to Sarsfields but the job was just too much for one player.

Sarsfields indulged their flashier instincts. Every one of the starting forwards scored: Conor Lanigan hit six from play; Pa Bourke 2-1 from play; Aidan McCormack landed four as well as another four from frees; Eoin Purcell hit three. The Mahers were again outstanding. It was like old times for Sarsfields.

The only caveat is that this was untypical Loughmore. Maybe the week-on-week dual mandate took its toll. Whatever the cause their star player didn’t shine and all over they struggled to match Sarsfields’ fluency. A really big one awaits this weekend when surely there’ll be a kickback.

After 20  minutes of the Clonoulty/Nenagh game on Sunday evening Eire Og led 0-8 to 0-6. Then their dam burst. In the next ten minutes, plus injury time, Clonoulty rammed home an unanswered 1-7. It was tour-de-force stuff, an absolute tsunami of energy and running and score hitting that dazzled Nenagh.

The goal was an ensemble affair, with Cathal Bourke and Dillon Quirke featuring before Conor Hammersley nailed the finish. Timmy Hammersley led the point-potting from play and frees. Nenagh were nowhere.

A Nenagh comeback in the second half, perhaps? Not with Clonoulty in this mood. The West side was full of energy and running and combativeness in a game that was at times tetchy. Jake Morris alone threatened to spoil the party. He did eventually find the target for his side’s goal but on other efforts Declan O’Dwyer stood defiant, once again underlining his credentials as the finest club goalie around.

All of this happened on a day when Clonoulty had to start without the O’Keeffe brothers in defence. It’s a measure of the side that they could absorb the losses, with Tommy Ryan and Jimmy Maher stepping into the breach.

In this form nobody will underrate Clonoulty. There’s a compactness about the side, a side with a strong spine and buckets of attitude.

For Nenagh it’s more of the same failings we’ve become familiar with. They did have to start without Barry Heffernan, who came on at half-time, but when this game was winnable Clonoulty simply had their measure.

Those were the two games I attended. Elsewhere I thought most games went according to expectation. Drom/Inch consolidated their position in group 1 with a win over JK Brackens, despite losing Johnny Ryan to a red card in the opening minutes. They’re through to the knock-outs, with the second position resting between Brackens and Kiladangan.

Group 2 I think is pretty clear-cut unless there are some sensational outcomes this weekend when Clonoulty play Holycross and Nenagh face Annacarty.

Group 3 I’d suggest has potentially the game of the round at the weekend with the clash of Kilruane MacDonaghs and Loughmore/Castleiney . It’s a case of winner-takes-all, which should inject major intensity to this collision. Sarsfields are already through, irrespective of the result of their game with Moycarkey.

With a few draws in group 4 the placings all hinge on the final games, where Borris-Ileigh face Upperchurch and Toomevara tackle Burgess. Borris and the ‘Church are on three points, with Toome on two and Burgess pointless.

An extraordinary situation arises in the Seamus O’Riain Cup where you have 16 teams competing and Newport is the only one guaranteed a quarter-final place heading into the final round of fixtures. It’s an amazing level of tightness between the teams and indeed a tribute to the grading system which has sorted teams between the various levels.

The intermediate grade too is tight and competitive. I saw the West Tipp Kickhams score an impressive victory over Carrick Davins at the weekend. It was tight enough up to half-time, with Kickhams holding a 1-11 to 0-9 lead thanks mainly to a Devon Ryan goal from a 20  metre free. Thereafter the West side took control, helped by some indiscipline from Davins who had Lee Mackey and Ger Robinson red-carded.

It was one of the steadiest displays I’ve seen from the West team for some time. In the past they’ve tended to be a bit flighty, mixing some impressive hurling with some wayward stuff but this was a much more solid, even performance where they stayed on task throughout. It sets them up nicely now for their final group game against Borrisokane, with both sides already through to the knock-outs. The Davins v. Galtee Rvs. match will be a relegation affair. It’s disappointing for Davins after their great junior win last year to be struggling immediately at the higher level.

In group 3 of the intermediate Ballybacon/Grange had a controversial win over Boherlahan at Cahir on Sunday. With the South side three up in injury time Boherlahan had a Colm O’Dwyer goal disallowed for a square infringement. Like most others I wasn’t close enough to make a judgement on the call but the lack of clear line markings on the pitch was no help.

In follow-up play Colm O’Dwyer had another chance but this time his shot from close-in flashed over the bar to the relief of Ballybacon who are now through to the quarter-finals. Brendan Cummins hit five points in a faultless display of long-range free-taking. Boherlahan’s game with Cappawhite this weekend will now be a crucial fixture, with Shannon Rovers also in with a shout if they can beat Ballybacon.

Finally, for the past 15  weeks on the local Tipp FM radio station we’ve been involved in nominating players for a Tipperary All Star team drawn from the past 30 years. Each week we nominate three players for a position and then a public vote on Twitter decides the winner.  It ends this week, with Nicky English way ahead in the voting for the number 15 spot.

It’s all harmless fun, I suppose, and there have been many of these selections during the lockdown period when live activity was missing and media space had to be filled. For the record the voters in this instance selected the following: Brendan Cummins; Cathal Barrett, Paul Curran, Michael Cahill; Brendan Maher, Ronan Maher, Conal Bonnar; Tommy Dunne and Noel McGrath; Lar Corbett, Declan Ryan, John Leahy; Eoin Kelly, Seamus Callanan, Nicky English.

No Paudie Maher then? He was nominated for number 7 but lost out to Conal Bonnar after an unusual voting pattern emerged. In any objective analysis it simply doesn’t stack up. Conal was a classy player but not in the same league as Paudie Maher, who would be automatic on any all-time Tipperary team.

My personal selection for the past 30  years would differ from the above in a couple of instances. Goalie and full back line stays the same. At half back I’d opt for Brendan Maher, Conor O’Mahony and Paudie Maher. No Ronan? On the basis that Ronan is still but young in deed and, hopefully, has a long career still ahead of him, I’d give O’Mahony the nod. In time I think Ronan has the potential to even surpass the brother but for the moment I’d go for the completed career of Newport’s best.

My forward line-up would read: Michael Cleary, Declan Ryan, John Leahy; Eoin Kelly, Seamus Callanan, Lar Corbett. No English? I apply a simple logic here. It’s a team of the past 30 years so you have to ignore what happened pre-1990. Judge English on his contribution as a player in the 90s  and he doesn’t deserve inclusion. If it was a team of the past 40 years, or 50 years, or even all-time then English would be automatic. It all depends on your criteria I suppose, not to mention your subjective judgement on these matters.

Doctors will differ but thankfully in this case no patients die.