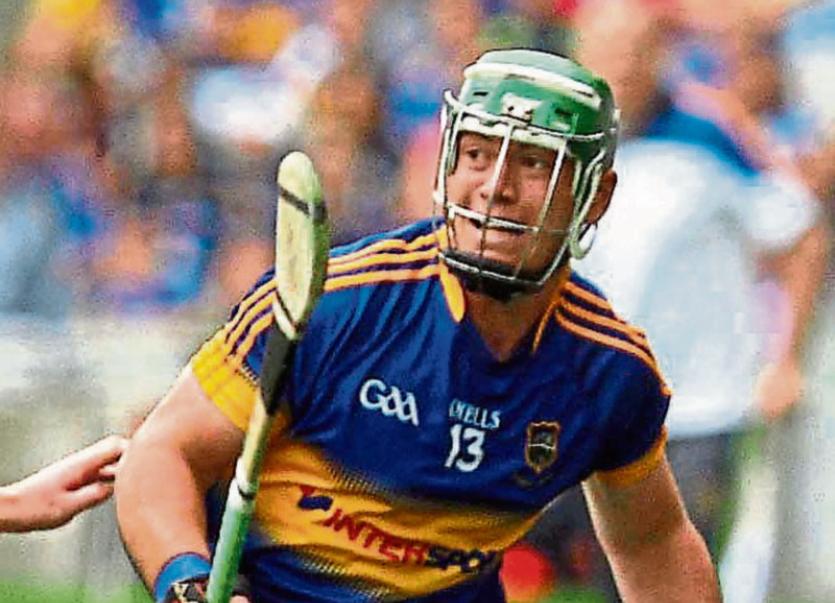 The hurlers play Cork while the footballers take on Limerick

The Tipperary Senior Football and Hurling teams for this weekends Allianz League games have been named with John 'Bubbles' O'Dwyer making a return to the hurling side at corner forward..

First out of the blocks tomorrow afternoon though will be the Tipperary Senior Footballers, who like their hurling counterparts last weekend, make the trip to The LIT Gaelic Grounds to play Limerick in the opening round of their Allianz Football League Division 3 Campaign at 5pm. WE all remember the excitement surrounding both teams last meeting that took a last minute Conor Sweeney wonder point and extra time to separate the sides, so we look forward to another exciting game again tomorrow.

Tipperary Senior Football Manager David Power along with his management Team have chosen a side that includes 3 League debutants, Goalkeeper Michael O’Reilly, Defenders Paudie Feehan and Jack Harney, in what is a relatively experienced side. A number of players are currently unavailable for selection due to injury, Michael Quinlivan (Groin), Bill Maher (Hamstring), Kevin Fahey (Calf) & Robbie Kiely (Hamstring).

There are also a number of new members of the football panel; Conor Bowe, Paddy Creedon, Stephen Quirke, Liam Ryan and Philip Ryan all getting the call up to the Senior panel. 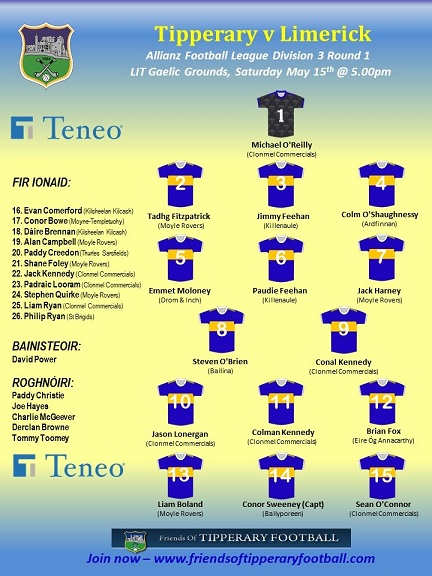 Following the game in Limerick, the attention will quickly switch to Semple Stadium as Liam Sheedy’s charges play host to Cork at 7.30pm in what should be a most entertaining encounter.

The team that will take to the field tomorrow shows several changes from what started last weekend in Limerick with four new faces along with a number of positional changes.

In to the starting 15 come Padraic Maher and John O’Dwyer, While Noel and John McGrath also come into the team to join their brother Brian.

There have been 64 previous League meetings between Tipperary and Cork. The Rebels lead the way with 31 wins to the Premier county's 28 and there were  5 draws, The most recent year that the counties did not meet  in the competition was 2008. 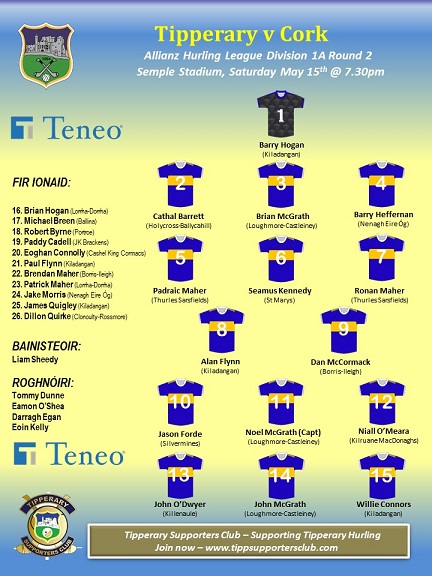