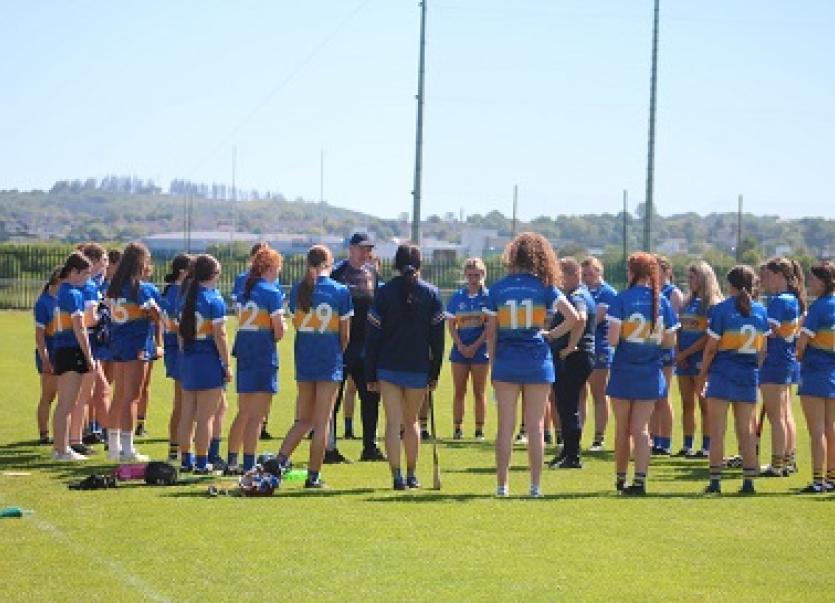 Tipperary battled hard but came a cropper against the Cork girls

Goals proved the difference as Cork cruised past Tipperary in the opening group game in the Tesco All-Ireland U16A championship at a sun-drenched Castle Road on Sunday.

Tipperary started very promisingly and led by 0-5 to 1-2 after 15 minutes and went in only 1 point down at the water break, playing against a stiff breeze. A controversial goal from a penalty granted to Cork after a collision between our goalie and the Cork full forward seemed to turn this game. Cork hit four goals in the opening half playing with the aid of the breeze. Aoife Fitzgerald sliced through for a Tipperary first half goal with Danielle Ryan (A) adding 2 points from play. Danielle Ryan (B) was taking on the Cork defence with Celine Guinan accurate from 4 frees.

In the second half, Cork kept the scoreboard ticking over as they continuously troubled the Tipperary defence.

Fiona Twohig was impressive as she notched 1-8 - including eight points from play - while full-forward Emily O’Donoghue and Grainne O’Mahony hit two goals each as the young Rebels got the best possible start to a campaign that will see Waterford provide their next opposition.

A close opening quarter saw the sides level on two occasions. A goal from Gráinne Finn came after a Tipperary defender deflected the ball to the net.

The third dispatched to the net from the penalty spot by Twohig and with Emily O'Donoghue also finding the net it was 4-6 to 1-7 in Cork's favour at the break.

Tipperary battled hard through the second half.

A Celine Guinan goal from the penalty spot gave them a glimmer of hope but with Fiona Twohig leading the way up front ably assisted by Emily O'Donoghue who grabbed their fifth goal and one from substitute Ellen Crowley, the result was never in doubt.