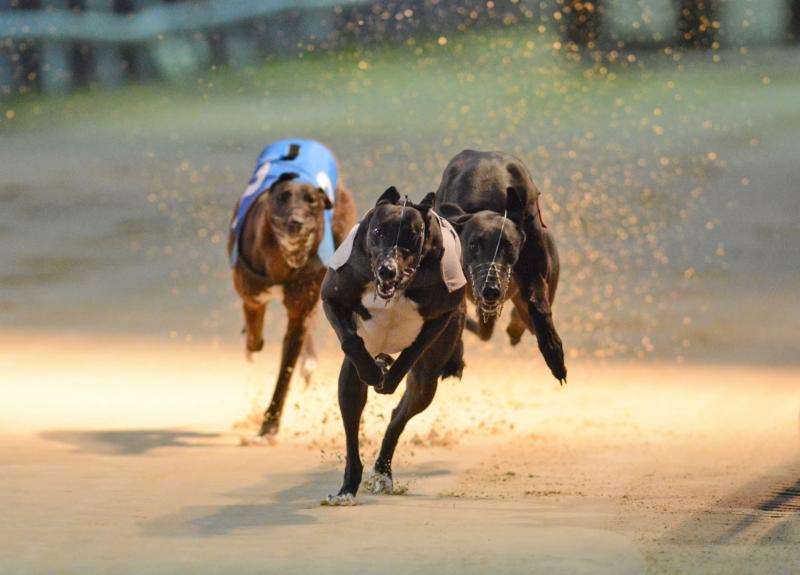 Improving to his fastest time of the competition, the Murt Leahy trained September 2018 whelp was made to battle for an early lead this time when breaking just off the pace from trap 5. Reaching the opening bend on the outside of Edencurra Brae when displaying slick dash however, Dark Devil rounded that rival before taking a two-length advantage to the top of the back-straight.

In behind the leading duo, Borna Aoife produced her best beyond the halfway mark, and she would again catch the eye to fill third but rounding the closing bends, Dark Devil still retained his two-length advantage.
Certain to stay strongly, a gallant Edencurra Brae produced a renewed challenge on the run for the line and lost little in his half-length defeat as Dark Devil stopped the clock in a slick 28.90 (-20) for the 525-yards, with Borna Aoife three lengths further back in third.

Level away from trap 2, Freedom Epic firstly secured command of the inside when leading rails-drawn Neon Alex and edging clear of the field, took a one-length lead to the opening turn. Bumping for many in behind saw Knockalton King bravely manoeuvre his way to second at the crown of the bends while Meduza performed with huge credit, maintaining forward momentum through bumps when emerging in fourth place at the top of the back-straight, just in behind the wide drawn Auxerre.

Bounding clear out front, Freedom Epic had victory secured when six lengths to the good over Knockalton King at halfway and with Meduza advancing to fill third, that order remained unchanged to the line. Completing his dominant three-length victory in 29.25 (-20), Freedom Epic led home the John Byrne trained duo of Knockalton King and Meduza, the latter closing to within a length of her kennelmate close home.

Invader lights up A3 semis
A number of 12-runner stakes under the sponsorship of the Track Supporters Club complemented the main event on Sunday and emerging as clear favourite from the semi-finals of the A3 525, Eddie Lennon’s Luminous Invader (Droopys Sydney-Luminous Fancy) shed his maiden tag in emphatic fashion.

Only moderately to stride from trap 1, his rails pitch proved crucial when arriving to the corner on the inside of a packing field. With bumping for all, the September 2018 pup sneaked a path to lead into the back-straight before skipping impressively clear to halfway.

In behind, Whizzing Jet caught the eye to claim second but remaining in full command, Luminous Invader held seven and a half lengths in hand while posting 29.19 (-20), as Knockroe Lee claimed third.

The opposing semi-final saw the Three Ks Syndicate’s Nowurmovin (Laughil Blake-Cats Belle) extend his current sharp form with a third win from his last four while inflicting a first defeat on the red-hot Cabra Sonic.

Second to that same rival last time out, the David Flanagan charge kept closer tabs on that early paced rival this time despite only third to the back-straight having begun well from trap 6. Advancing to second while reducing arrears to a length at the closing bends, the strong staying Nowurmovin produced his winning move on the outside along the home stretch and stopping the clock in 29.25 (-20), held two lengths over Cabra Sonic with Foxrock Genius third.

Fastest in the semi-finals of the Track Supporters Club A5 525, John Richardson’s Cozzys Gem (Droopys Roddick-Malteaser) claimed a sixth career win when bouncing back to form in a most game performance.
Slow to stride from trap 2, the Richardson charge raced fifth on the run to the first bend but railing well, she cannily sneaked her way to second at the top of the back-straight when in pursuit of Busy Busy. Joining that rival at halfway, Cozzys Gem proved much the stronger in the latter part of the race when drawing clear to a five-length verdict in 29.63 (-20) as Killduff Duke filled third.

Mid-division in the early stages, the lightly raced July 2018 whelp paced up well on the outside of the field from trap 5 before gamely edging his way to the lead when widest around the opening bends. Two lengths to the good at halfway, Whizzing Charlie stretched clear of third bend bumping with seven and a half lengths to spare before Daithis Main Man stayed best to grab second from Theresmybook in 29.81.

The remaining sweepstake semis came in A7 grade and gaining a second career win in the opener, Brian Bowe’s Foxrock Callum (Candlelight King-Swift Inny) led throughout. Breaking best from trap 2, the April 2019 whelp contained the strong running Oh My Sarah by three lengths in 29.65 (-20) with Billys Sahara third.

The second A7 semi-final delivered a facile winner in the shape of Patsy Meaney’s Kylenoe Best (Ballymac Best-Toms Linda) as the September 2019 pup led from the second bend when shedding his maiden tag at the third time of asking. Drawing readily clear from halfway, he held eleven lengths over Definate Ark with Cashel Danny third.

Outside of the competition action, Sunday’s S1 330 saw the Slye Crew Syndicate’s Hon The Jet (Droopys Jet-Genuine Honey) back in the winner’s circle for an impressive seventh career success. Level away from trap 3, the September 2018 whelp duelled for early supremacy with Crokers Paradise to his inside but forcing that rival to check when powerfully galloping the bend, Hon The Jet skipped clear before repelling the late threat of Whizzing Porter by a length in 18.12 (-10).

Impressing while securing an eighth career win a warm A2 525, Nicholas Nolan’s Triangle Ricardo (Droopys Jet-Triangle Maui) won a crucial battle of early pacers when just showing in front to the back-straight ahead of Faithful Rory. Never more than a length separated that duo who dominated throughout as just a length and a half settled the affair with the Nolan charge posting 29.40 (-20).

Opening the action, the A7 525 went to Hugh Coughlan’s Emma Gabby (Native Chimes-Lisdaleen Sue) as the March 2019 whelp progressed for the experienced gained on debut, overturning a five length second bend deficit to Monroe Dreamer in a two and a half length verdict while posting 29.76 (-20) in an eye-catching score.

Top Dog
Dark Devil (Ballymac Vic-Bull Run Ballad) has been relishing the Thurles circuit and there was real merit in his containment of strong runner Edencurra Brae on Sunday. Given his early paced prowess, he holds every claim to again reach the third bend with a lead in the final where a repeat of his slick 28.90 (-20) will offer huge claims of landing the Tipperary Cup.

Best Bitch
Ranked sixth on semi-final times in the Tipperary Cup, that fact belies the performance of Meduza (Good News-Jaytee Osprey) when bumped at the opening bends before making her way past the unbeaten Auxerre to secure qualification to the Tipperary Cup Final. Better drawn in blue than her complicated trap 4 berth behind Freedom Epic last time, she remains a big player in Saturday’s showdown.

One To Watch
Commencing her career last month, Emma Gabby (Native Chimes-Lisdaleen Sue) made a belated debut as a March 2019 whelp but leaving a pleasing impression in her 29.76 (-20) victory on Sunday, could well be set for rapid progression over coming weeks.