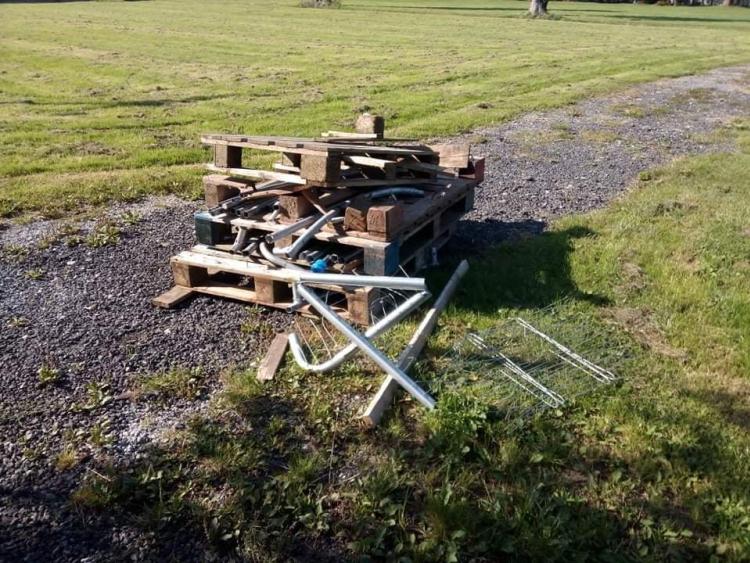 Some of the items dumped at St Patricks Cemetery, Thurles, most of which are recyclable

A new low has been reached in Thurles, according to Cllr Jim Ryan, who reported illegal dumping in St Patrick's Cemetery in recent weeks.

Speaking at a meeting of the Thurles Templemore Municipal District Council, Cllr Ryan said that he was 'shocked and dismayed' to discover that people had gone to the trouble of entering the graveyard and dumping rubbish in some of the unused sections.

“This area has been a blackspot for people stealing from graves in recent times, but now this is a new low where people are entering the graveyard and actually dumping rubbish there. I just cannot work it out at all - it is just disgraceful. The gates of the cemetery should be locked at night time and I feel that we should have CCTV up there as well to try and prevent these activities,” Cllr Ryan said.

Illegal dumping had been reported in a number of locations throughout the District, with Cllr Ryan also calling for the College Lane walkway between Mill Road and Kickham Street to be tended to once more - the council spent some time cutting back the ditches and clearing up the area, but it has deteriorated in recent times again, according to Cllr Ryan.
Meanwhile, Cllr Sean Ryan pointed out that dumping has taken place at Boulick, Gortnahoe, and he noted that only six litter fines have been issued .

“The message has to get out there that this is unacceptable behaviour and we have to do something to try and deter people from doing it. The same thing with graveyard thefts - deplorable stuff,” he said.

Cllr Peter Ryan said that the council continues to try to do its job in relation to illegal dumping, but the problem is not going away - a different approach is required in order to get on top of the problem, he said.