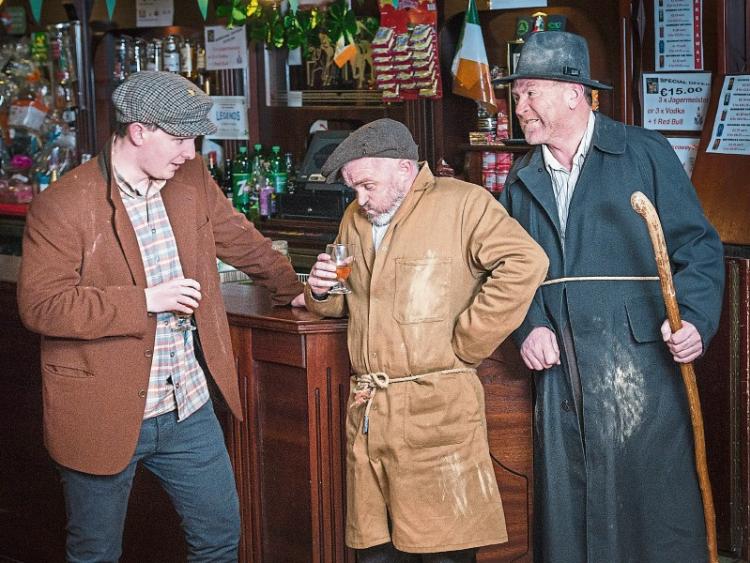 John Morris (Tadgh McCabe), Kevin Fahey (The Bird) and Ger Meagher (The Bull) in rehearsals for 'The Field' at the White Memorial Theatre

For the first time ever John B Keane’s epic drama “The Field” takes to the stage in the White Memorial Theatre, Clonmel from 16th to 19th May.

With a powerful strong cast under the direction of Anne Williamson, Clonmel Theatre Guild is buzzing with excitement in anticipation of this production.

Rehearsals are in full swing while the crew behind the scenes are working hard building a set to create the atmosphere for this wonderful play.

The Field is probably John B Keane’s best known and much loved play.

In casting this play, director Anne Williamson was passionate about finding the perfect actor to best portray the each of the characters in the plot.

And bringing back a few who have not been on stage with us for a few years in Kevin Fahey (the Bird) and John Leahy (Mick Flanagan).

Speaking to Ger Meagher, who plays the part of the “Bull”, he said it has been a lifelong ambition of his to play this role. Even though he has a lot of lines to learn, he says he is relishing it, loves coming to rehearsals and is really looking forward to bringing this play to the people of Clonmel and South Tipperary.

Anne Williamson began directing in the 1990s and is well known for her productions with the well-travelled and loved Fionn Mac Cumhaill players from Cloneen founded in 2003.

Anne has been involved with many groups including the Clonmel Theatre Guild, The Galloglass Theatre Company, JW productions & the Slievenamon Musical Society and throughout her acting career has played many lead roles on stage in musicals and plays.

Her favourites are Maggie in "Big Maggie", Annie Wilkes in Misery as well as Lady Bracknell in The Importance of being Earnest, to name but a few.

Behind the scenes set builders Edmond Ryan and Mark Small are hard at work, ably assisted by guild members who are always on hand to help with painting, moving etc, which can be a lot of fun.

Newcomer Adele Armstrong takes on the role of Stage & Props Manager, while Carolanne Mullooly will be looking after Sound & Lighting, Ann Loh-Wrenne and her team in Front of House will look after patrons on show nights and Adrienne Small is the show’s producer and is responsible for PR.

It is a tradition in the guild to make a donation from the opening night’s raffle to charity and on this occasion we are supporting Brú Columbanus, which provides “home from home” accommodation for relatives of seriously ill patients in any of the Cork Hospitals regardless of where they come from.

Tickets priced at €15, OAPs and students €12, are currently on sale in Marian’s Bookshop, Clonmel, (052) 6123813. For those of you who like to do things online, tickets are available at www.clonmeltheatreguild.org.