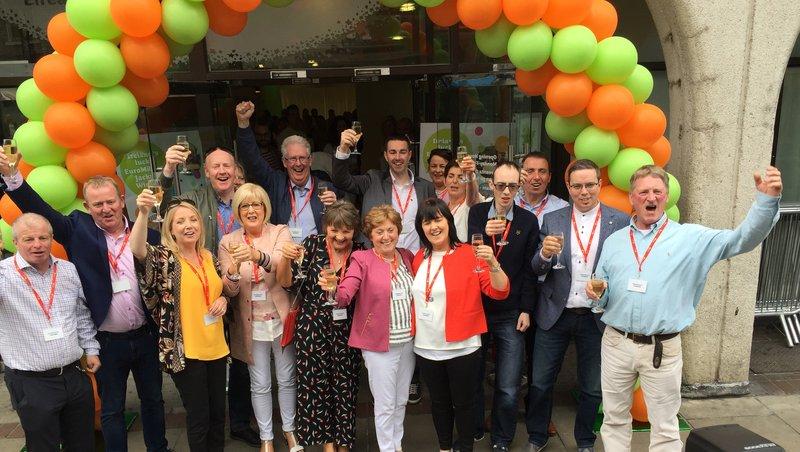 Dublin’s Abbey Street came to a standstill on Friday as members of a lucky 32 member syndicate from Thurles, Co Tipperary, arrived at Lotto HQ to claim a mega €17 million EuroMillions jackpot prize.

The winning Stakelum’s Hardware Store syndicate were on top of the world as they arrived by bus at the National Lottery office to collect their winnings from the EuroMillions draw of Tuesday, June 5. Each  syndicate member stands to get a whopping €531,250 each.

This is the 13th Irish EuroMillions jackpot, with a payout of €630 million since the game was launched in Ireland in 2004. The first EuroMillions winner was Dolores McNamara from Limerick who won an incredible €115 million in 2005.

The Stakelum’s syndicate has been in existence for over 25 years and includes present and past staff of the large hardware and homeware store.

Spokesperson for the 32-member syndicate, Gerard Sammon, spoke of the group’s surprise and delight at winning the mammoth jackpot. “At first we simply couldn’t believe it. We were stunned, but we have had over a week to let the good news sink in. It has been an absolute roller-coaster. We are all absolutely delighted - it will make a huge difference to all of our lives.

“In particular we have all been blown away by the goodwill there has been towards us from our colleagues in Stakelum’s and by people in the town in general. Everybody is genuinely happy for us. It is great that this massive jackpot is being shared amongst 32 people. That is 32 families who will benefit,” Gerard continued.

Gerard said the journey to Dublin to collect the winning cheque was a happy one. “There was great crack on the bus and everybody is in super form. We couldn’t have been treated better by the team in the National Lottery who have guided us through the prize payment process and who have welcomed us here with open arms. This will be a day we will all remember,” he added.

Owner of Eason’s in Thurles Shopping Centre which sold the golden ticket, Tom O’Toole and his wife Catherine, joined in on the celebrations at Lotto HQ. Eason’s is on a winning streak at the moment as the shop sold a winning Lotto jackpot ticket worth €7.5 million eight months ago.