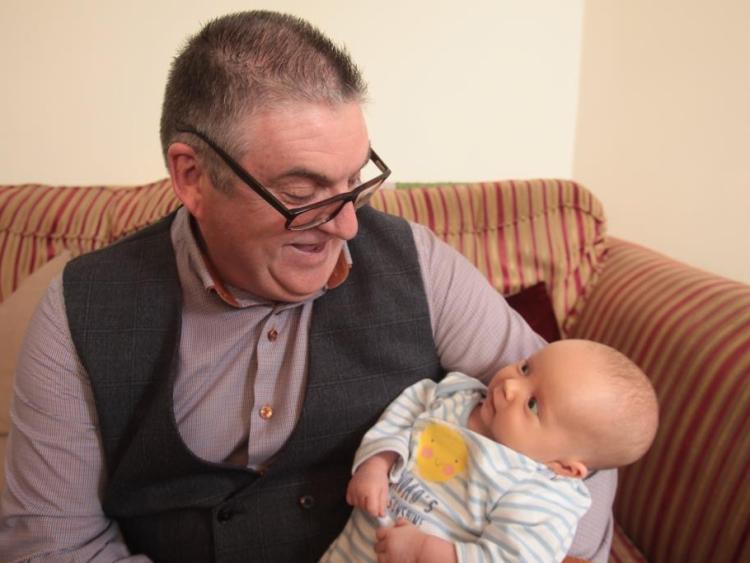 A loving grandfather devastatingly admits that he won’t be able to hold his Clonmel grandson in the near future.

His daughter Sophie, married to Ballypatrick’s Patrick Gavin, live with their four month old son Archie in Clonmel, and Michael says his very rare form of motor neurone disease (MND) will halt him spending quality time with precious little Archie. “This disease has affected my hands so much that soon I won’t be able to hold Archie. Soon he won’t be able to hear me speak,” Michael tells The Nationalist.

Nonetheless, a determined Michael, living in Castletroy, Co. Limerick with 32 years, but originally from Kilrush in Co.Clare, is raising awareness of the incurable terminal disease affecting 360 Irish people today.

Similar to Cahir MND sufferer Tim Shanahan, the father of Katie, Sophie, Dawn, Ericka and Adam is undergoing clinical trials at Beaumont Hospital in Dublin to find a cause and a cure for MND.  “I have check ups with consultant neurologist Dr. Orla Hardiman and her team every three months, and undergo trials that may not help me but will hopefully benefit people with MND in the future,” Michael continues.

Michael describes the “circle of life” - coming to terms with MND and finding out that his daughter Sophie was expecting Archie - that brought a concoction of emotions out of him last year.

Michael gave up work in May 2016, five months before he was officially diagnosed with the progressive neurological condition, due to a series of shattering events. His 86-year-old mother Celia, a diabetic with advanced dementia, passed away on May 1st which was his father Martin Rú's 45th anniversary.

Michael suddenly lost his wife Monique two months later. “I ran my own franchise, Acme Blinds, but it had gotten to the stage where I was too unsteady and unsafe to do a fitting upstairs in someone’s house. When my mum died the floodgates opened as I was at the end of my tether physically trying to hide my condition. I had been given a walking stick the previous January but hid it from my mother because I didn’t want her to know something was wrong with me.

"All the family were then gathered in the kitchen after Monique’s months mind mass when Sophie and Patrick said they had a bit of good news. Patrick had entered one of his hanging flower baskets in a competition and had won first prize. Sophie asked if we wanted to see photos and handed them to her sisters and brother. Within about five seconds there were screams, tears and hugs. The photos were scans of baby Archie,” he smiles.

Michael is "maintaining as much independence as possible” for as long as he can. He continues to drive and remains secretary of UL Bohemian RFC. Having spent years coaching underage teams at Bohs, along with being part of the Munster Association of Referees since 1995 and cheering on Munster at Thomond Park, he isn’t ready to let MND take full control of his life just yet.

Michael is a volunteer with the Irish Motor Neurone Disease Association (IMNDA), and encourages others to recognise the symptoms of MND and to seek professional advice. “I started noticing symptoms about five years ago but I put it down to old age and general wear and tear. Then I started losing balance. I used to play rugby in the front row with Kilrush and when someone bumped off me they would go flying. But this wasn’t the case anymore as I was falling over very easily.

“I was starting to find it hard to climb a ladder and walk up the stairs as my knee joints were giving in. My thumb and index finger started to lose power and I couldn't hold a hammer or drill for as long anymore.

“My sisters were worried I was drinking as I had started to slur my words. It took months of tests before I was told I have MND. I spent the next four days just driving around with tears down my face. I had no idea how my family and I were going to cope,” he recalls.

Michael, who was a member of the Defence Forces Army Reserve for over 40 years, is “coping well” with his condition at present. “It doesn’t seem to be aggressive, but maybe that’s just me ignoring it. MND is the 1000 day disease as people often die within that period after being diagnosed. But my variant of MND is different. I feel as though I have been handed a ball of twine and not a piece of string. My sister Susan says ‘If Carlsberg did MND, then my version would be their version’.

“I get up out of bed every day, leave the house and meet people. If I went into myself and stayed indoors, I may as well be in the grave beside Monique. I will be there someday but not before my time.

“I meet people and they tell me I’m doing great and I’m looking great.  I tell them I think my glass is half full. I say this but there are times when I find it hard to believe.  I suspect at times that some bugger keeps changing the glass for a smaller one though,” he underlines.

Michael praises his family and the IMNDA for being pillars of support over the past year. “I’m extremely fortunate to have a very loving family. I suppose I could claim a tiny bit of credit for that. I find in life you get out what you put in, or at least some.  I believe in the spirit of volunteering and giving of one’s time, knowledge, experience or whatever freely.

“I never wanted to be a passenger in any group I was involved with. I always wanted to be a driver. This enabled me to push myself to the limit, get the best out of myself in every situation and most of all enjoy life to the fullest.

“I'm not just a member of IMNDA, but also a volunteer for the association and will do whatever I can for as long as I can. I intend on banking some brownie points before I need help. That’s just the way I’m built.  I’m nothing special. Just doing what I can while I can,” he adds.

To support Michael and MND awareness month, the IMNDA want people to ‘Drink Tea for MND’ this June.

To organise an event, contact fundraising@imnda.ie or free call 1800 403 403 to receive a SuperValu sponsored tea pack.