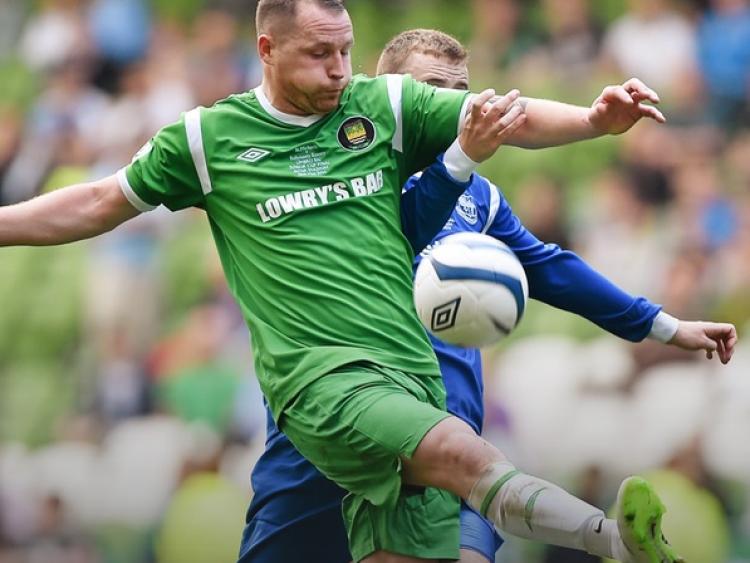 A Tipperary sports star who pulled out of playing with the county minor footballers and went on to captain the Republic of Ireland amateur soccer team is feeling proud after being named the Football Association of Ireland’s (FAI) Junior International Player of the Year.

Higgins, who has won almost every medal at junior soccer level in Ireland, says winning the Junior International Player of the Year award is the ultimate achievement. “It’s the highest award a junior player can get and it’s a good identity of a player when you hear they have won that award,” he tells The Nationalist.

Full back Higgins played an important role on the Republic of Ireland amateur international team that were runners-up at the UEFA Regions Cup finals in Turkey last summer.

Higgins journey to captaining Ireland followed stellar underage careers in soccer and GAA. Higgins signed for St. Michael’s in 1993, excelled as a defender throughout his teenage years and made his first international cap in 2011. “I wouldn't have been as technical as most of the players ahead of me when I signed for St. Michael’s, but I stuck with it and got there eventually. I was always very fit and quick,” Higgins says.

Higgins won soccer and GAA Munster titles at St. Ailbe's School in Tipperary Town, and represented the county at underage. The full-back was selected to train with the Tipperary minor footballers, but admits having to make a big decision regarding his sporting career. “I pulled away from the Tipperary minors because I was more dedicated to soccer and wanted to play for the county youth team. At the time in my village and at Galtee Rovers they saw my dedication to soccer and didn’t put any pressure on me. It has worked out very well for me and I have been lucky with my career,” Higgins smiles.

Higgins, who also had a spell with the Tipperary senior footballers, recalls the ‘unbelievable’ atmosphere in the Irish camp at the UEFA Regions Cup finals in Turkey. “It was so professional. We trained every day at the Turkish Football Federation grounds and we had the best facilities at our base in Istanbul.

“You really find out what professional football is all about. You’re gone for two weeks at a time, it’s very intense coming up against top quality European teams and it brings the best out in you.

“At club level you could go to a pitch at the side of a mountain, whereas at international level the pitches, referees and opposition are at a high standard,” Higgins adds.